YouTube Shooting: Of Course, The Left Made Fools Of Themselves Trying To Blame The NRA 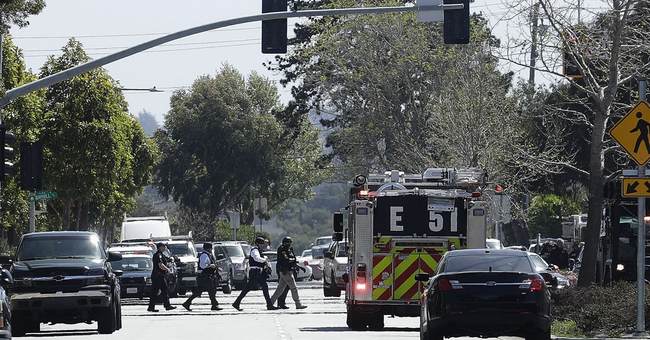 As Beth noted, we know who committed the shooting at YouTube’s campus in San Bruno, California yesterday. It was a woman, who apparently had a huge grudge with the company over alleged censorship and discrimination that cut into her views on her YouTube page. Nasim Aghdam decided to solve this by strolling into the courtyard and shooting three people before turning the gun on herself (via NBC Bay Area):

In a video posted in January 2017, she says YouTube “discriminated and filtered” her content. In the video, Aghdam says her channel used to get lots of views but that after being “filtered” by the company, it received far fewer views.

It appears Aghdam controlled multiple YouTube channels, including one with videos of her speaking Farsi. Aghdam posted videos about an array of topics including hand art and animal rights.

In 2009, she protested the military’s use of pigs in training exercises. A news report by The San Diego Union Tribune shows a photo of Aghdam holding a plastic sword and spattered in blood as part of the demonstration by the People for the Ethical Treatment of Animals (PETA).

The NBC Bay Area Investigative Unit has also learned the license plate on a car towed from YouTube’s campus Tuesday is registered to Aghdam. In 2014, she posted a video on YouTube of what appears to be the same car, stating that it was vandalized by “anti-vegans” because a bumper sticker said, “meat is murder.”

Yeah, she sounds likes an NRA member or someone influenced by their agenda, said by no one. The National Rifle Association had nothing to do with this. Did the civil rights organization issue a statement over YouTube’s absurd practice of censoring gun videos on their platform? You bet—and they should. But Aghdam’s grievances date further back. Frankly, shouldn’t we be relieved that no one besides the shooter died?

Still, the Left went bananas over this shooting, attacking the NRA in some odd sense that if this organization vanished tomorrow, gun violence would evaporate and gun owners would turn over their firearms. Reality check: there are many other local and state-based pro-Second Amendment organizations. There’s Gun Owners of America, who think the NRA doesn’t go far enough in protecting our Second Amendment rights. So, if they want to waste time and make fools of themselves trying to smear the NRA, gun rights supporters, gun owners, and conservatives, they’re certainly carrying on a wonderful tradition of the rest of the country laughing at these left wing nutjobs.

Yes, and we can repeal amendments. The mechanism for doing so is in this thing called the Constitution. https://t.co/7dUrryjTpE

Politicize whatever you want. I choose to politicize the 33k+ gun deaths US suffers per year and the relationship between them and the NRA, the terrorist organization that makes those deaths possible. https://t.co/POkKtorSQw

I don't blame the NRA for the specifics of this shooting. I blame them for creating the means for it to happen. I label them a terrorist organization because they know these incidents will happen, want them to happen, indirectly provide the guns for them, and profit from them https://t.co/XINnCJZOw2

The blood never dries. It never stops. The NRA is a terrorist organization. https://t.co/3Sx3Z6N6nB

No, I don't know who the shooter is.
It doesn't matter if they are an NRA member.
Yes, I know how they got the gun: the NRA and its blood-soaked lackeys made it possible for that person to get it. https://t.co/DcpasjveOD

Another shooting.
I'm going to politicize the fuck out of it, and so should you.
The NRA is a terrorist organization. https://t.co/UsoQBIxWpf

Actor Michael Ian Black, who thinks the NRA is a terrorist organization (because some of us are still in middle school), said he doesn’t care about the details of the shooting, he’s going to “politicize the f**k out of it.” He also said the NRA made it easy for this woman to purchase a gun in one of the most anti-gun states in the country, which is…a peculiar view. Yet, that wasn’t even the most shameless. Brianna Wu, who is running for Congress in Massachusetts, used the shooting for a campaign push. Our friends at Twitchy captured some gold. Shannon Watts of Moms Demand even tried to blame the NRA for the shooting concerning their statement over YouTube’s decision to start censoring gun videos.

2/ I don’t give a damn if the gun extremists don’t want to hear it.

We have a gun violence epidemic in this country. And we WILL take action, including a very broad ban of assault weapons.

We are not afraid of you. You’re the emperor with no clothes.

I won’t send #ThoughtsAndPrayers to @YouTube employees. I have a three point plan to address our gun crisis.

A. If you own a gun, I will mandate that you carry liability insurance.
B. I support a broad, outright ban of all assault weapons.
C. I will mandate gun safety classes.

“In light of the shooting in San Bruno at YouTube, will the @NRA apologize for this disgusting tweet in which it calls on its members to “rise up” against the company’s decision to take down how-to gun videos?” she tweeted. Yeah, because “meat = murder” girl was totally pushed over the edge by this statement.

This is what happens when emotions replace facts. You can froth at the mouth all you want and blame the NRA for this incident; they’re not at fault. It’s also best to probably not go off half-cocked and the safety off before, you know, we have some more details on the case.

Also, remember that these people are gunning for your Second Amendment rights because they hate you. Period. They know this is a key facet of rural America, of conservatives, and of Americans—they hate it. They want to repeal the Second Amendment; Black mentioned that the Constitution has such mechanisms. Yes, the same constitutional scholar who didn’t know how the 25th Amendment works would like to remind all of us that there’s a process in the Constitution to amend our founding document. The goal is repeal and confiscate, or chip away at these rights to the point where repealing them might not be as debatable. If the right has been degraded so much, what’s the point, right? That’s the mindset.

For now, Republicans, rural Americans, conservatives, and Trump supporters need to truly unite. Enough debating whether Trump is a perfect fit for conservatism. He’s not. No one really is—and he’s the president, so the debate is really over. He’s a right-leaning populist. I’ve gotten over it. And Clinton is not president, so yes—Trump winning was worth it and he’s been surprising this term (yes, I do plan to vote for him in 2020). I say this because the Democrats are coming down the mountain. Every year the Bill of Rights is on the line. No matter what they say, they want gun bans and confiscation. They want Australia on steroids. They’re not on our side. They never will be. So, start packing some more sandbags and vote when the 2018 midterms come around this November. In the meantime, enjoy this shoddy and absurd attempt to blame the NRA for this tragedy. Keep at it, left-wingers. You’re only motivating the GOP base and increasing firearms sales, record sales actually.

Does PETA have blood on their hands liberals? ??

Shooter wasn't an NRA member. You might as well scream that the Girl Scouts did 9/11 while you're raging out. https://t.co/UVdxWi67oh

UPDATE: Nasim Aghdam’s father called the police to inform them of his daughter’s fury at YouTube, and that she had gone missing in the days prior to the shooting. They found her in her car in the early morning hours Tuesday, telling Aghdam’s father that they would keep “an eye on her” (via CBS LA):

The father of Nasim Aghdam, the woman who went on a deadly shooting spree at YouTube’s headquarters in Northern California Tuesday, says his daughter became upset with the streaming video company when they stopped paying her.

Aghdam’s father was too emotional to go on camera, but told CBS2 News’ reporter Tina Patel that his daughter had gone missing for a few days. He said he had called law enforcement in the San Diego area because he was concerned about her recent ire towards YouTube.

He said law enforcement authorities contacted him Tuesday at 2 a.m., telling him they had found his daughter safe in her car in Mountain View in Northern California. When the family realized that was near YouTube headquarters in San Bruno, they told police about her recent complaints about how the company was “ruining her life.” They claim police told them they would be keeping an eye on her.