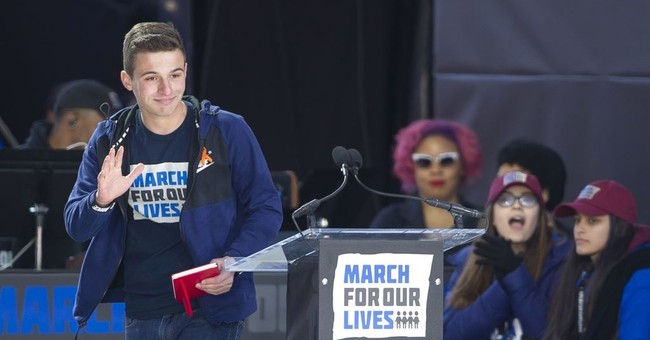 Well, it would seem the debate between Kyle Kashuv and Cameron Kasky is off. The two had agreed to debate the issues, the facts, and not hurl insults. This is after Kasky tweeted that the pro-Second Amendment camp reportedly couldn’t “attack their argument,” so they’re attacking them personally. Well, these arguments have debate before—we won; you just weren’t paying attention, kid. At the state, local, and federal level, we’ve won. The GOP controls two-thirds of the governorships, 69/99 state legislatures, and has the most state lawmakers in office since the founding of the Republican Party. Still, 2018 could upend that legislative wall against new gun laws, which are just ways for the progressive Left to chip away at Second Amendment rights to the point where government can enact confiscatory policies. Yet, back to these two students.

Kashuv is a conservative and a Second Amendment supporter, who finally was able to get some airtime. Guy interviewed him earlier this month. The Parkland Three—Cameron Kasky, Emma Gonzalez, and David Hogg—had already been on a robust media campaign peddling gun control initiatives. Despite their differences, the two are friends, but Kashuv’s swipe at fellow student Jesse Guttenberg was a bridge too far for Kasky. Guttenberg was voicing criticism over Marjory Stoneman Douglas High School’s new security protocol, which mandates that only clear backpacks would be permitted on campus.

We’ll set up a debate in the near future.

Kyle, I’ve enjoyed my discussion about gun laws with you so far, but after seeing this, I think I’m out. For personal reasons.

I disagree on certain policies with some family members of some victims, but I never go after them, especially not like this.

Clear backpacks are not the answer. Anyone can sneak a knife into school by putting it into a folder or a gun by hiding it in their pants. Don’t violate our privacy and give us real security. That’s what will help.

Guttenberg tweeted, “Clear backpacks are not the answer. Anyone can sneak a knife into school by putting it into a folder or a gun by hiding it in their pants. Don’t violate our privacy and give us real security. That’s what will help.”

Kashuv responded by saying, “Instead, let’s violate our Constitution?” Kasky replied saying, “Kyle, I’ve enjoyed my discussion about gun laws with you so far, but after seeing this, I think I’m out. For personal reasons. I disagree on certain policies with some family members of some victims, but I never go after them, especially not like this. This is low.”

Kashuv, after being called out by Kasky, apologized and noted he "had not realized whose account it was. It was a mistake and I am regretful of it."

Another tweet from Kashuv said: "It was awful of me and I am wrong. Period. I am so sorry."

"Continue using your voice for what you believe in, but I want nothing to do with you in this conversation," Kasky followed up. "I will happily discuss with other conservative students who don't go about it like that."

Yet, the irony here is that a) other students have said they're against the clear backpack rule because it punishes everyone for someone else’s actions; and b) they're noting how this policy won’t increase security, just infringe on people’s privacy/rights. Stepping away from Kashuv and Kasky, this is exactly what pro-Second Amendment supporters have been saying for years—and it’s backed up by the facts. The news media and their Democratic Party allies always hold conservatives to a different standard. We need to answer for why a crazy person committed a mass shooting, which leads to Democrats pushing laws that only punish law-abiding gun owners and chip away at the Bill of Rights. National Rifle Association members have endured this for decades. They have to answer for every mass shooting—and its members are vilified as child murderers, which is exactly what happened after this tragic shooting for the past month. Now, the students of Marjory Douglas are going to be able to relate to NRA members when they return from spring break.

The Daily Signal cited how what the Parkland Three wants right now—assault weapons ban, ban on high capacity magazines, etc., would have a de minimis effect on reducing mass shootings and gun violence:

Only 12 percent of mass killings are mass public shootings. Most mass killings are familicides (murders of family members or intimate partners) and felony-related killings (such as robberies gone awry or gang-related “turf battles”).

Although there has been a slight increase in the frequency of mass public shootings over the past few years, the rates are still similar to what the United States experienced in the 1980s and early 1990s.

Over 90 percent of public mass shootings take place in “gun-free zones” where civilians are not permitted to carry firearms.

A complete ban on “assault weapons” will save very few lives: Six out of every 10 mass public shootings are carried out by handguns alone, while only one in 10 is committed with a rifle alone.

Few mass public shooters have used “high-capacity magazines,” and there is no evidence that the lethality of their attacks would have been affected by delays of two to four seconds to switch magazines. In fact, some of the largest mass shootings in U.S. history were carried out with “low-capacity” weapons.

Some of the worst mass killings in the United States have occurred without firearms:

Before the 2016 Orlando nightclub shooting, the deadliest attack on the LGBT community in America occurred in 1973 when an arsonist killed 32 and injured 15 at the Upstairs Lounge in New Orleans.

In 1987, a disgruntled former airline employee killed 43 people after he hijacked and intentionally crashed a passenger plane.

In 1990, an angry ex-lover burned down the Happy Land social club where his former girlfriend worked, killing 87 others in the process.

In 1995, 168 people were killed and more than 600 were injured by a truck bomb parked outside the Alfred P. Murrah Federal Building in Oklahoma City, Oklahoma.

Kashuv apologized and the two should resume this debate, if Kasky was sincere about having one at all. Nixing it over a bad tweet is sort of silly.