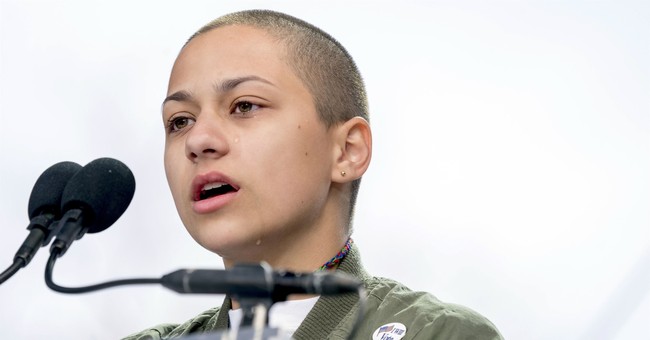 As a First Amendment supporter, the survivors of the Marjory Stoneman Douglas High School shooting have a right to say what they want. On February 14, Nikolas Cruz shot and killed 17 people. Federal, state, and local officials could have stopped him. His firearms could have been taken away with a proper court order. Better yet, he could have been barred from purchasing the AR-15 rifle if state and local officials had committed him for reportedly cutting himself; Cruz and his girlfriend split in 2016 which prompted this behavior. Commitment for mental evaluation would have shown up on a background check, but that didn’t happen. The police were called to his house over 30 times, some cases they were told Cruz had threatened people before with guns, even pointing them at people’s heads. The FBI was given a tip on January 5. They didn’t forward it to their Miami office. The government failed here. It wasn’t the AR-15 or lax gun laws; the laws weren’t even enforced. Liberals worship at the altar of government, which failed to keep these kids safe. Where’s that in the national televised news media? Now, that’s established, let’s delve into what Emma Gonzalez, one of leading voices of this new gun control movement, said in her essay for Teen Vogue.

Again, I get the legislative goals, but when the Left says they don’t wan to ban all guns; it’s a gun ban. When they want common sense gun control, it’s laying down the foundation for just that. We can’t trust them. The March for Our Lives rally in D.C. pointed that out, where hordes of signs called for gun bans and the abolition of the Second Amendment. Also, Delaney Tarr, another leader and Marjory Stoneman student, said when they give us an inch, they’ll take a mile in reference to the Trump administration's recent move to ban bump stocks. That’s all you need to know—and that’s how the Left operates in general. Gonzalez says that getting shot is one of the biggest threats to teens. She’s not wrong, but it makes it seem as if this country has become a shooting gallery with this fudged statistic. Put it another way, it may be one of the biggest threats, but it's nowhere near the levels she insinuates in her essay:

The problem of gun violence goes beyond the countless demographic differences between people. Any way you cut it, one of the biggest threats to life as a teen in the U.S. today is being shot. People have been shot to death en masse in grocery stores, movie theaters, nightclubs, and libraries, on school campuses and front porches, and at concerts — anywhere and everywhere, regardless of socioeconomic background, skin color, age, ethnicity, religion, gender, geographical location.

Young people in this country have experienced gun violence for their entire lives, only to be faced with a number of representatives and officials who have been seduced by the gun lobby or have generally failed to make effective change. The pro-gun propaganda peddled by the National Rifle Association feeds myths about gun ownership, and these myths arguably perpetuate the suffering of thousands of Americans each year.

It would also benefit us to redefine what assault weapons are so that when we call for a ban against them, it’s clear that we aren’t trying to ban all guns. No one needs to use an assault weapon to protect themselves while walking home at night. No one should be allowed to use an AR-15 to strategically hunt people, which, in case anyone forgot, is what made us speak out in the first place.

First, car accidents are THE number one killer of teens:

Auto accidents are the No. 1 killer of American teenagers, a new study finds — killing almost as many drivers as passengers, and killing more kids than homicide or suicide.

The new report, called "Teens in Cars," was paid for by the General Motors Foundation and based on a national survey of 1,000 teens between 13 and 19.

Though the study did not cite texting or telephoning as responsible for traffic accidents, it did say that about 40% of teenagers polled said they had been in cars driven by teens who were texting or talking on the phone behind the wheel.

Two, mass shootings are rare. Three, school shootings are rare. Four, schools are safer than they were in 1990s. Five, violent crime is on the decline, with gun homicides remaining low. In fact, firearm related homicides have dropped significantly since 1993. As for the former points about schools, well, that’s not an NRA study. It’s from Northeastern. More kids die walking or riding their bikes to school than from shootings at school.

Four times the number of children were killed in schools in the early 1990s than today, Fox said.

“There is not an epidemic of school shootings,” he said, adding that more kids are killed each year from pool drownings or bicycle accidents. There are around 55 million school children in the United States, and on average over the past 25 years, about 10 students per year were killed by gunfire at school, according to Fox and Fridel’s research.

We’ve been here before, folks. Gun control activists tried to go federal in 2013 and failed, exhausting some of the most precious time of Barack Obama’s second term. They tried to go at the state-level with some success, albeit in states that were already run by Democrats. We need to forget these victories. Yes, we’ve stopped the anti-gun wave, but we have to act as if we’re down with every renewed fight to strip law-abiding Americans of their Second Amendment rights. It’s not just an attack on this amendment, but all of them. An attack on one amendment in the Bill of Rights is an attack on all.

Right now, a new so-called assault weapons ban, a high capacity magazine ban, a buyback program (laughable), and universal background checks is off the table with the GOP in charge; they’re protecting our rights on this issue.  The latter is a prelude to a registry, which is necessary for confiscation. If Democrats win, these issue items become more likely to pass—that cannot happen. Most of what she wants is already law, like the illegality of straw purchases. There is no such thing as a gun show loophole. Any FFL dealer at a show has to conduct a background check on all sales and transfers. And yes, the AR-15 is used for self-defense, target practice, and hunting; there are various rounds that it can chamber. Whatever the case, with Parkland, it's not because of lax gun laws. The police, FBI, and the State of Florida decided to kick the can down the road on what to do with Cruz. They didn't enforce the law. Maybe reform needs to start there.

Yet, I do have hope for the future of the Second Amendment because young Americans don’t find gun control all that palatable, but that’s for a later post.

These kids have grown up in the safest era in over 50 years. https://t.co/fJ6Kqu8CZc