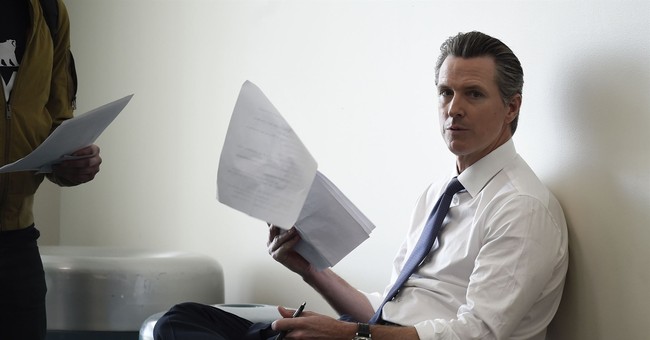 Needless to say, California is not happy that the Department of Justice is suing them, rightfully, over their obnoxious sanctuary state law. That law into effect this year. It reached some tense moments when Attorney General Jeff Sessions tore into Oakland Mayor, Libby Schaaf, who recently warned her residents about scheduled ICE raids.

“Here’s my message — how dare you. How dare you needlessly endanger the lives of our law enforcement officers to promote a radical, open borders agenda,” he said at California Peace Officers Association's Annual Legislative Day earlier this month. Schaaf responded in kind, though the most eyebrow raising was the remark from California Gov. Jerry Brown, who said, “This is basically going to war against the state of California.”

Lt. Gov. Gavin Newsom (D-CA) called the director of U.S. Immigration and Customs Enforcement (ICE) an “a plus prick” in an official government email obtained by NTK Network.

Newsome was citing a story by SFGate.com that focused on ICE officials arresting illegal immigrants in California. In the email, sent to his sister, Hilary, Newsom wrote:

“No doubt in my mind they will target us – the ice director is an a plus prick this is personal / political strategy, get ready.”

The primary for that contest will be held on June 5.

Yet, Newsom might be playing on both sides of this issue. When he was mayor of San Francisco, he reported illegal aliens who were arrested for crimes to ICE. All were minors and the Board of Supervisors voted in 2009 stating these undocumented youths could only be reffered to ICE if they had been convicted of a crime. Newsom disregarded the board and continued to report illegal aliens who were minors to ICE (via Mercury News):

But a fight over sanctuary policy a decade ago when Newsom was mayor of San Francisco suggests that he wasn’t always as strident a defender of immigrant rights.

In July 2008, Newsom imposed a city policy that reported undocumented youth arrested for felonies to federal immigration authorities. That decision — made the week after a father and his two sons were killed by an undocumented immigrant — meant that some kids were put at risk of deportation even if charges against them were later dropped.

The San Francisco Board of Supervisors voted to overturn Newsom’s policy in 2009, mandating that minors could only be referred to Immigrations and Customs Enforcement if they were convicted of a felony. But Newsom’s administration simply ignored the board, continuing to turn juvenile arrestees over to ICE for the rest of his term.

Meanwhile, according to emails obtained by the Bay Area News Group, Newsom’s administration also conducted a review of people in the city’s probation system and referred more than 350 suspected undocumented immigrants to ICE.