‘It’ll Be The End Of You’: GOP Senator Warns Kim Jong-un To Not Pull A Fast One With Trump 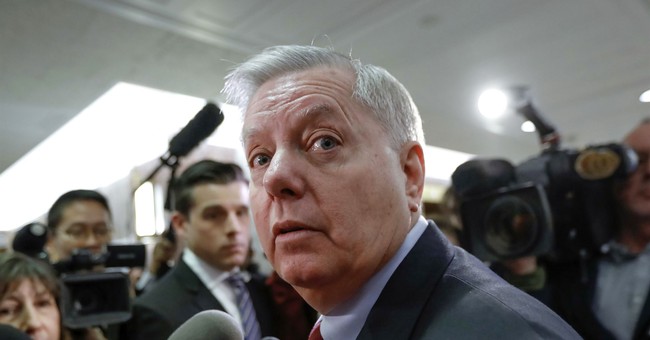 As Leah wrote last night, North Korean dictator Kim Jong-un wants to meet with President Donald J. Trump. After months of a Twitter spat that many saw—wrongly—as a prelude to war, missile tests, and new sanctions—the president said he would meet with the North Koreans in May:

South Korean National Security Adviser Chung Eui-Yong, who made a brief announcement about the talks outside the White House, credited Trump on this development. And he wasn’t the only one, David Sanger, The New York Times’ national security reporter, said the Trump administration deserves “enormous credit” for keeping the pressure on North Korea. It was something Obama could have done, but they didn’t do it under his time in the Oval Office (via Free Beacon):

Sanger agreed while also pointing to Trump's imposition of "truly deep sanctions, which the U.S. stepped out to enforce."

The commitment to sanctions, he argued, gave Kim "additional motivation to realize that he had to get into some talks that would relieve that pressure."

"I think President Trump deserves enormous credit for ratcheting up that pressure and making sure those sanctions were real. There was no reason the Obama administration couldn't have done that, and they didn't," he said.

"After numerous discussions with President Trump, I firmly believe his strong stand against North Korea and its nuclear aggression gives us the best hope in decades to resolve this threat peacefully," Graham said in his statement.

But Graham quickly tempered his optimism with a stern warning to the regime.

"I am not naive. I understand that if the past is an indication of the future, North Korea will be all talk and no action," Graham wrote, referring to North Korea's history of derailing international efforts to prevent it from developing nuclear weapons.

"However, I do believe that North Korea now believes President Trump will use military force if he has to," Graham said.

He continued: "A word of warning to North Korean President Kim Jong Un — the worst possible thing you can do is meet with President Trump in person and try to play him," Graham continued. "If you do that, it will be the end of you — and your regime."

We’ll see how things progress, as May and these talks draw nearer.