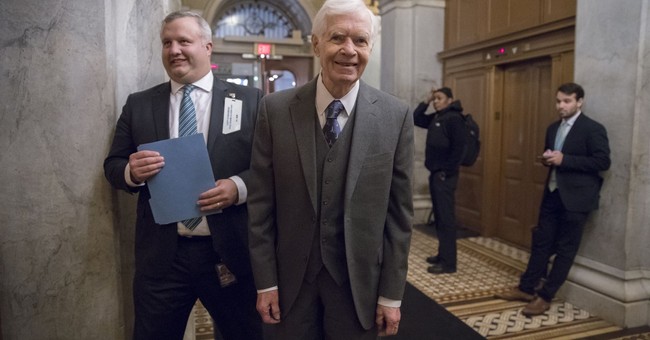 While he survived a brutal and controversial Senate primary in 2014, Thad Cochran of Mississippi, citing his failing health, is resigning effective April 1. A special election will be held to finish the remainder of his term that ends in 2020. If no one gets above 50 percent, a runoff will be held. For now, Gov. Phil Bryant will appoint an interim senator to fill the vacancy until the election. Cochran’s colleague, Sen. Roger Wicker (R-MI), is up for re-election this year and is facing a challenge by state Sen. Chris McDaniel. McDaniel challenged Cochran in 2014 (via NPR):

I regret my health has become an ongoing challenge," Cochran said in a statement Monday. "I intend to fulfill my responsibilities and commitments to the people of Mississippi and the Senate through the completion of the 2018 appropriations cycle, after which I will formally retire from the U.S. Senate."

Cochran, 80, chairs the Appropriations Committee and has been absent from the Senate for long stretches over the past year, and his resignation does not come as a surprise. However, it does mean that both of Mississippi's Senate seats will be on the ballot come November.

Cochran was first elected to the Senate in 1978, and had previously served three terms in the House.

Now, depending on who Republicans nominate, this shouldn't be a problem. If the party decides to take another trip down looney lane, then, as you saw in Alabama, anything is possible.