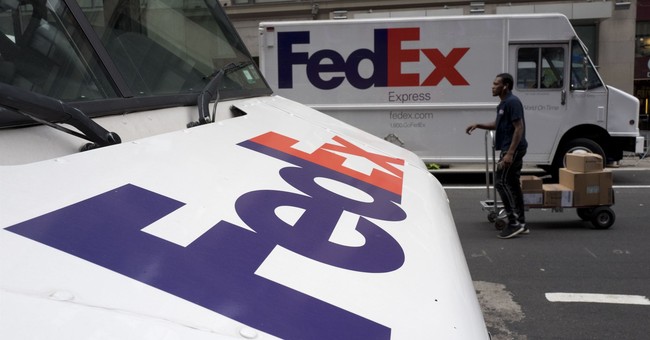 After the tragic shooting at Marjory Stoneman Douglas High School on February 14, the gun wars are back. The Democrats, progressives, anti-gunners, and student survivors are leading a mob to bully companies into dropping discounts for NRA members. This isn’t hurting the NRA, one of the oldest civil rights organizations in the country. It’s punishing its members for believing in Second Amendment rights—civil rights. It’s the coastal elite telling everyone else we hate you. It’s the coastal elite once again reminding Trump voters and other right-leaning voters how insufferable Democrats have become, how intolerant they are, and how they’re coming after their rights. If Democrats want to really run on gun control for 2018, go right ahead—it’s going to end with y’all being as disappointed as Minnesota Vikings fans (too soon?).

As a slate of companies caved to the liberal mob, FedEx held the line. Well, sort of—they added a piece of pro-gun control commentary to try and calm this rabid lefty rowdy down (via The Hill):

FedEx announced Monday it will not cut ties with the National Rifle Association (NRA), despite pressure to do so after a mass shooting at a Florida high school.

The shipping giant added that it still opposes civilian access to assault weapons.

However, the company said it “does not and will not deny service or discriminate against any legal entity regardless of their policy positions or political views.”

“FedEx has never set or changed rates for any of our millions of customers around the world in response to their politics, beliefs or positions on issues,” the company said.

Yeah, assault rifles are already not readily available for civilian ownership. That’s been law since the 1934 National Firearms Act. To obtain an automatic weapon, one must undergo a background check with the Bureau of Alcohol, Tobacco, Firearms, and Explosives, which can take up to a year or longer. Your name goes into a database. Your gun’s serial number is logged into a database. And you pay for the NFA tax stamp. It’s heavily regulated to say the least and incredibly expensive. Oh, and these transfers have to be with firearms that have been manufactured prior to 1986.

Here's FedEx saying they want to ban assault rifles (which are already banned) and "large capacity magazines" (which they don't define) but won't drop the NRA from their partners program. https://t.co/PefHuQBSbu

Assault rifles are fully-automatic guns and new sales of them to civilians has been banned since 1986.

Assault weapons are semi-automatic guns and there are likely tens of millions of them in civilian hands.

Semi-automatic firearms likely make up a large majority of all guns.

The commentary from FedEx is disappointing to say the least. It’s somewhat bittersweet. Yes, the shipping giant didn’t cave to the progressive mob, but they did signal that they’re just as anti-gun as the rest of them.