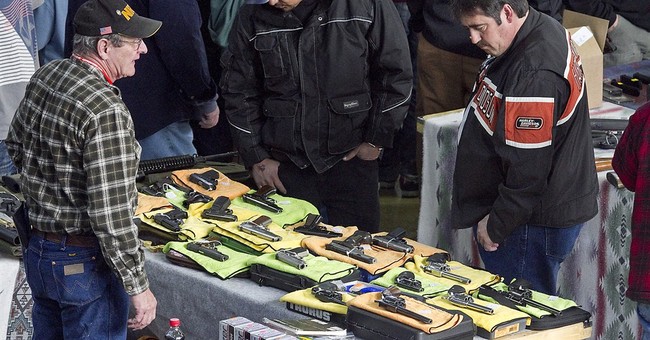 Well, let’s see. If a major network hosts a town hall event, where everyone is talking about banning firearms, then this is going to happen. When the so-called New York Times conservative Bret Stephens says it’s time to repeal the Second Amendment, this is going to happen. Gun sales are going to go up. In Tampa, Florida, the line was out the door at the gun show over the weekend, with 7,000 people paying admission on Saturday. They expected more on Sunday. With talk of a new assault weapons ban, banning bump stocks, and raising the age limit to buy rifles to 21 from 18, vendors said sales were very good. The reason is simple: people think that government is coming after their rights. They’re not wrong. That CNN town hall showed the anti-gun Left is in the flesh. It was very revealing. Yet, The New York Times’ reporting staff, Stephens is an op-ed writer, did a decent report on the show, noting that vendors were open to some measures like a bump stock ban, which has been considered a novelty item and stronger background checks:

Several sellers said they were on track to double their normal sales for a weekend. “It’s sad to say, but whenever there’s a shooting, business only goes up because people are afraid of losing their right to own a certain weapon,” said Quaidman Woody, who was running a booth with his father, a sales representative for CrossHeirs. “So even if they don’t need another AR, they’ll buy another AR or pieces of it.”

“We’ve lost our perspective on what’s really happening,” said Scott Rollf, who owns a company called 22mods4all. He said customer concerns about potential legal limits on guns had perked up sales after a decline in demand in recent months led him to reduce prices.

Mr. Rollf said he approved of Gov. Rick Scott’s proposal to raise the minimum age in Florida to buy firearms to 21 from 18.

He was also fine with banning so-called bump stocks and other attachments that increase firing speeds, which he views as “useless” for hunting and unsafe in other applications.

Norman Carolino, who was selling body armor at the Tampa show, called the scrapped plans a disservice to people looking for protection. He said most of his sales on Saturday were to teachers, school administrators and “parents who are scared to death.”

“I’m wiped out of everything,” he said. “There are parents in here who’ve never seen the inside of a gun show.”

Mr. Woody estimated that only 10 percent of gun show shoppers were firearms aficionados. The rest, he said, are either newcomers or dabblers. Many buyers have never purchased an AR-15 before, he said.

In Bass Pro Shop yesterday in Miami, the line was 3 deep for 4 clerks working the gun counter.

It’s by far the busiest part of the store https://t.co/ZoUibflddc

There was one woman manning a booth who said she was open to a ban on so-called assault weapons. Yes, we may disagree. I’m certainly not in favor of raising the age limit of the purchasing of long guns, which would bar adults from defending themselves and exercising their Second Amendment rights. Also, goes without saying, I’m a hell no on a new so-called assault weapons ban. Background checks we can work with, but usually the anti-gun Left takes us off the cliff in discussions. Still, the thing to glean here is that there are differing opinions within the Second Amendment crowd. That’s a good thing. It also shows that those of us who support the NRA are not child murderers. Remember that going off the cliff stuff? Yeah, well, this is exhibit A. Yet, we’re going to have to tolerate another week of media smearing people who support the Second Amendment are evil, child killers. Get your bourbon ready.