What In The Fresh Hell Is This? Reporter Suggests More Abortions Would Have Prevented Florida Shooting 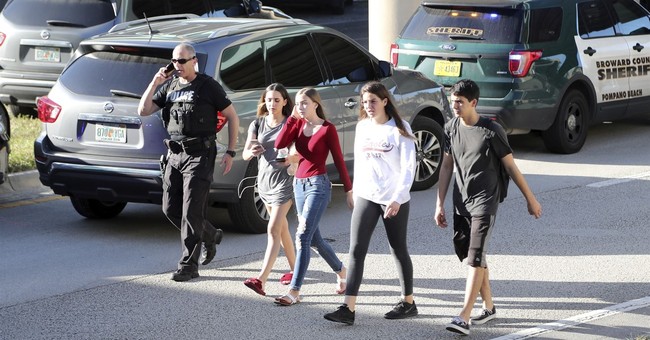 Maybe it’s the proliferation of social media in our daily lives that has exposed us to this insanity, but we’ve seriously gone off the deep end. For some abortions rights supporters apparently, the Florida shooter wouldn’t have been able to commit this tragic crime if his birth mother had aborted him. That’s what Israeli-American reporter and former MTV Europe VJ Becky Griffin insinuated on Twitter.

Woman puts baby up for adoption, he grows up to be a violent young man who will spend the rest of his life in prison for a mass murder. Tell me more about how abortions are wrong. #Florida #ParklandSchoolShooting

“Woman puts baby up for adoption, he grows up to be a violent young man who will spend the rest of his life in prison for a mass murder. Tell me more about how abortions are wrong,” she tweeted.

Well, you can see how this turned out. It was a total dumpster fire, or at least that’s what we can obtain from her other subsequent tweets in which she complains how her timeline has blown up, and how Twitter is a mob of fools. Oh, she says she wants to have a conversation, but not with a mob. Translation: I only want to talk about abortion with people who agree with me; nice End of Discussion play right there. It’s not that she’s wrong, folks. It’s just that we’re all out of touch or something.

Yeah, despite my conservative leanings, I will listen to the most rabid progressives, folks who think the world is being run by reptilian humanoids, and Bigfoot enthusiasts because that’s the beauty of free speech. We can choose whether to engage or not with folks who espouse views that may seem odd, wrong, or downright evil.

For this, it’s a hard pass.

The shooter could have been stopped if the legal right to abortion was used more often? That’s where some go  after this tragic shooting? Second, the shooter's mother made her decision. Isn’t that her right? Isn’t that her decision? We’re taking issue with a woman’s very private decision because it happened to be one that pro-aborts don't like—and they say pro-lifers are the ones trying to take a woman’s choice away. It’s insane.

Yes, the shooter, Nikolas Cruz, who shot and killed 17 people at Marjory Stoneman Douglas High School in Parkland, Florida on Wednesday, was adopted. It’s horrific. More details about him are coming to light. The stories about the victims will also trickle in and the debate over what to do about it will commence. I don’t think abortion should be on the agenda.

Lol. This drew so much attention by ppl jumping to conclusions like I think adoption is wrong, when all I said was that a woman who was clearly unfit to have a child — did — did NOT raise him — and maybe it could have turned out better if she could have made a CHOICE. https://t.co/sWFTuprsYF

Also — if you think tweeting at me names of adopted ppl — you clearly did not understand what I said. And there’s no point in even trying to have a conversation with a mob who doesn’t care. I love twitter but it’s just a mob of fools most of the time.

I’m adopted. I turned out okay. I’m happy. I’m an American citizen. I live in an exceptional country and write about what I want to write about. I’m doing what I love. This is my American dream. If I could say one thing to my birth mother, it would be thanks for choosing life.  That’s what adoption is; it’s a choice for life. Obviously something happened where she couldn’t take care of me, so she gave me up to cared for and raised by a loving family in the USA. And guess what—I didn’t turn out to be a school shooter. Every adoption story is different. Every experience is not the same, with some being incredibly tragic. I don’t think saying abortion would have helped is going to catch on, but that’s just me and anyone else with cognitive function.

Woman puts baby up for adoption, he turns out to be Steve Jobs. Tell me again how abortions are right. https://t.co/YpDZ38K7vg

Wow. Dear abortion rights supporters - if you are using the fact that the Florida shooter was adopted to promote keeping abortion legal, you are doing it very, VERY wrong. https://t.co/UJ0aCDgMWV