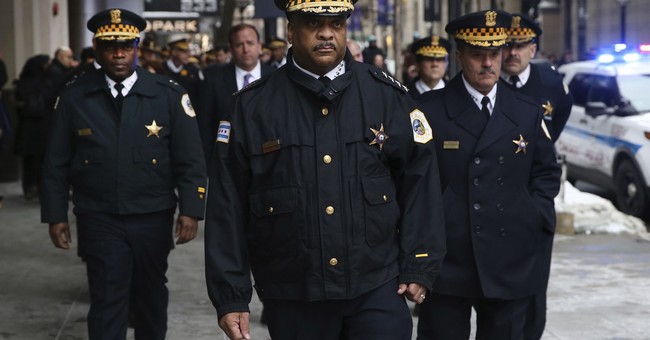 A Chicago police commander was shot and killed while trying to apprehend a suspect in downtown portion of the city (aka The Loop). The Chicago Tribune reported that Commander Paul Bauer, 53, is the highest-ranking police office killed in decades. Bauer was in pursuit of the suspect when shots rang out. The shooter, who was not identified, is said to have a rap sheet that goes back to 1994, with this person doing time for almost 20 years for robbery. The publication added that the sad irony is that Bauer had complained that he could not get violent criminals off the streets in the Windy City:

Cmdr. Paul Bauer, 53, was shot to death at the Thompson Center after chasing a man fleeing from tactical officers who tried to stop him, police officials said. Bauer confronted the man, who opened fire as the two struggled, killing the 31-year department veteran, according to police officials and other sources. Bauer had been in the area after attending “active shooter” training, which prepares officers for mass shootings. He also had a meeting with aldermen scheduled for later in the day.

Officers apprehended a suspect who multiple sources identified as a 44-year-old four-time felon and former prison inmate with an arrest record dating to at least 1994. He was sentenced to 16 years in prison in 1998 for robbery, court records show. The Tribune is not identifying him because he had not been charged as of Tuesday evening.

Officers recovered a gun from the man, who was wearing a protective vest, according to a source.

The incident briefly pitched the heart of Chicago’s business and governmental district into turmoil as emergency vehicles screamed down streets, office workers looked on from sidewalks on a cold, gray day and police cordoned off sections of the downtown area that includes the engines of state, city and county government. Crestfallen officers grouped outside Northwestern Memorial Hospital before Superintendent Eddie Johnson, appearing to choke back tears, announced that Bauer had died.

Thought and prayers to the family of Commander Bauer.