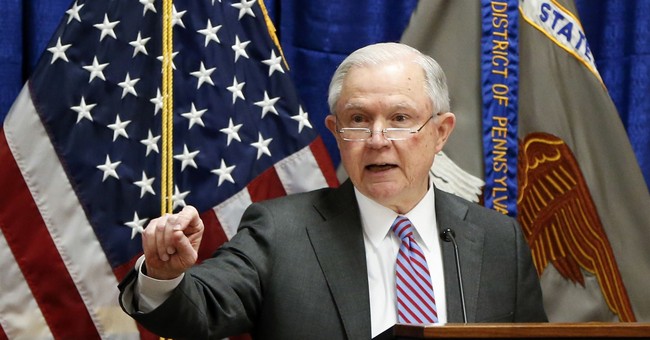 Attorney General Jeff Sessions drew the ire of progressives (again) when he addressed the National Sheriffs Association winter meeting on Monday, saying “The office of sheriff is a critical part of the Anglo American heritage of law enforcement. We must never erode this historic office." Can you guess what phrase triggered them? Yeah, it was the very non-racist and historically accurate “Anglo-American” (via Newsweek):

“Since our founding, the independently elected sheriff has been the people's protector, who keeps law enforcement close to and accountable to people through the elected process," he said at the organization's winter conference. "The office of sheriff is a critical part of the Anglo-American heritage of law enforcement. We must never erode this historic office."

The Anglo-American comment may have been unscripted as it did not appear in a copy of his prepared remarks published by the Department of Justice. That copy reads: "Since our founding, the independently elected Sheriff has been seen as the people’s protector, who keeps law enforcement close to and amenable to the people. The Sheriff is a critical part of our legal heritage."

There could well be an innocent explanation for Sessions's comment, with some speculating that he meant only to refer to the policing structure the United States inherited from Britain or even the Anglo-Saxon route of the word. "Sheriff" is a portmanteau of the Anglo-Saxon words "shire," meaning "county," and "reeve," meaning "guardian," according to The Washington Post.

But Sessions's history led some on social media to be less generous with their interpretation.

OMG!! Jeff Sessions really removes the white hood this time- he just said “The office of sheriff is a critical part of the Anglo-American heritage" https://t.co/x4EdaVklbH

Important to note that he could have very likely been referring to the organizational structures of policing from Britain that the US adopted. Still, he should know better than to use such loaded language

Jeff Sessions did a speech and said "the office of Sheriff is a critical part of the Anglo-American heritage of law enforcement." He wanted to go on record with the ANGLO-AMERICAN description. He went full white supremacy, and every Black and non-white sheriff should be insulted pic.twitter.com/F0PYS5j7es

If anyone is still confused this is the reason why we kneel. #ColinKaepernick #TakeAKnee #SessionsMustGo pic.twitter.com/673VKPAUke

In case you forgot that our justice system is rooted in white supremacy:

Attorney General Jeff Sessions, at Sheriff's Association meeting, just now: "The office of sheriff is a critical part of the Anglo-American heritage of law enforcement" https://t.co/X6yz8DNcSL

This is the attorney general of the United States of America. Jeff Sessions should be fired immediately. https://t.co/jhFhxk3rrq

Wow. Jeff put it so simple and concise:

"The office of Sheriff is a critical part of the Anglo-American heritage of law enforcement.”

The Anglo-American heritage of law enforcement?

Do you know anyone who says “Anglo-American heritage” in a sentence? What could possibly be the purpose of saying that other than to pit Americans against each other? For the chief law enforcement officer to use a dog whistle like that is appalling. Best NO vote I ever cast.

Yes, it was an innocent explanation. Second, yeah—liberals blew a gasket, with tweets saying he went “full white supremacy,” and that he removed his white hood. Oh, here we go with the Jeff Sessions is racist nonsense. Yet, it was not a full-throated offensive because some left-leaning news outlets, to their credit, knew better (via New Republic):

Jeff Sessions’s “Anglo-American” remark wasn’t inherently racist.The attorney general received some attention on Monday for referencing “the Anglo-American heritage of law enforcement” during a speech to the National Sheriffs’ Association. CNN and The Daily Beast took note of the phrase without drawing any conclusions, while other outlets made their point more clearly. Splinter’s Emma Roller, for example, concluded that Sessions “let his racism peek through a little more than he may have intended to.”

Sheriffs, for example, can be traced back to the medieval English institution of the same name. Even after independence, early Americans continued to draw upon English common law and initially kept colonial institutions of justice intact. Judges and lawyers frequently note this continuity and its impact on modern American law. Justice Anthony Kennedy’s habit of writing in sweeping phrases makes him especially prone to this. He’s invoked the “Anglo-American legal tradition” in matters ranging from a 2006 dispute about the duress defense in criminal law to a 2011 case about the First Amendment’s Petitions Clause.

But Kennedy is hardly alone. Justice Samuel Alito complained in a 2013 dissent that the majority’s decision was “based on a putative rule of trespass law that is nowhere to be found in the annals of Anglo-American jurisprudence.” It’s not just the Court’s conservatives, either. In a 2008 Guantanamo Bay-related case, Justice David Souter wrote a concurring opinion, joined by justices Ruth Bader Ginsburg and John Paul Stevens, that pointedly reminded the decision’s dissenters about “a basic fact of Anglo-American constitutional history” involving habeas corpus.

NBC News included a statement from DOJ on the remarks:

The Justice Department defended Sessions' comments as meant to invoke sheriffs' English roots, as well as the debt America's legal system owes to England's own.

“As most law students learn in the first week of their first year, Anglo-American law — also known as the common law — is a shared legal heritage between England and America. The sheriff is unique to that shared legal heritage," Ian Prior, a spokesman for the department, said in a statement. "Before reporters sloppily imply nefarious meaning behind the term, we would suggest that they read any number of the Supreme Court opinions that use the term. Or they could simply put ‘Anglo-American law’ into Google.”

Folks, even Obama used the phrase “Anglo-American” in his speeches. Is he a racist now? National Review’s Charles Cooke took the political correctness crowd to the woodshed over their idiotic outrage over this term:

Genuinely laughing out loud at people who think this means “white.” https://t.co/oTxQfeAgnH

Here’s then-Senator Obama using the term “Anglo-American” as correctly and appropriately as Sessions did, in a speech from 2006. We must not consent to lose our language at the behest of the historically illiterate. https://t.co/Oc6JCM9GRY pic.twitter.com/EDx1TSfRrm

You’ve just got to be kidding me with this. I use that term constantly to refer to the structures, institutions, ideals, and cultural tenets that existed in both Britain and then in the United States. e.g. “Anglo-American conceptions of due process.” We’re too dumb to survive.

Yeah, history can be funny at times, especially when it’s disregarded to take a swipe at the Trump White House.

Encyclopedia Britannica sure is racist pic.twitter.com/Ojlj7LuLwK

This might come as a surprise to some, but did you know that the United States was formed from a collection of British colonies, and that much of our legal system and common law stems from centuries of British tradition?