BOOM: Economic Growth Projected To Break Five Percent In The First Quarter Of 2018 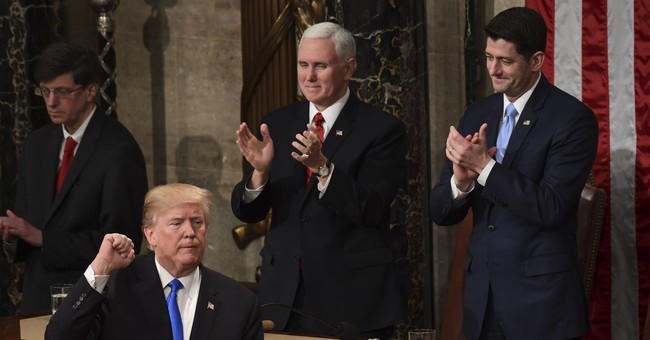 The Republican tax plan caused Democrats to stroke out. It’s the worst bill to ever come before Congress. It’s going to lead to the end of the world. It’s a scam. Well, none of that actually happened. Over 250 companies have announced they’re going to dole out bonuses to workers, re-invest in the country, and boots charitable donations.

Over three million American workers have received at least $1,000 in bonuses, some as much as $3,000. Over 90 percent of middle class Americans will benefit from this bill over the next eight years. The GOP will have to outmaneuver Democrats to make these cuts permanent, but for now—workers’ wages are rising. Consumer confidence is at a 17-year high. Unemployment is at record lows. The economy is booming.

The economy is on track to put up blockbuster growth numbers in the first quarter, according to the latest forecast from the Atlanta Fed.

GDP is expected to surge 5.4 percent to start 2018, the central bank branch estimated in its latest rolling look how the economy is progressing.

If the forecast holds, it would be the best quarter since the Great Recession ended in 2009. The previous highest was Q3 of 2014, which hit 5.2 percent.

That forecast comes amid some sharply improving data released Thursday.

Real consumer spending jumped from 3.1 percent to 4 percent amid a sharp savings drawdown, and private fixed-investment growth surged from 5.2 percent to 9.2 percent.

If this economic news continues throughout the year, and it looks like it very well could—then the 2018 midterms could be very interesting.