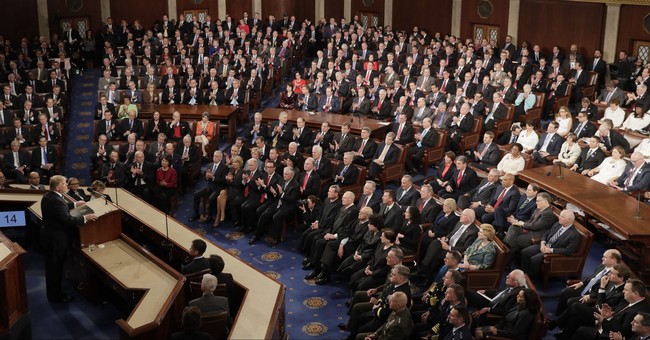 Oh, this is a great laugh. Alex Griswold of The Washington Free Beacon captured classic Trump Derangement Syndrome hours before the president’s State of the Union address slated for 9 P.M. EST. it boils down to this: Trump reads from a teleprompter, like Obama, Bush, Clinton etc. before him, so it’s not going to be presidential. Better yet, it’s not presidential because it’s Donald Trump and Hillary should be giving the speech tonight. It’s the tantrum of a seven-year-old. Is it annoying? Yes, but I’ve made peace with the fact that liberals are just insufferable, so I look for the entertainment value, and this one is pretty good (via Free Beacon):

A New York University journalism professor, a New York Times columnist, and others preemptively attacked any pundits who may praise President Donald Trump's State of the Union address as presidential.

NYU professor Jay Rosen mocked the tendency to call Trump's speeches "presidential," and called out the Washington Post for a story indicating the speech could help reset his presidency.

Tagging the comments in his morning newsletter, CNN's Brian Stelter wondered if Rosen had a point.

"Will pundits resist the temptation to suggest President Trump is rebranding himself if he sticks to the TelePrompTer on Tuesday night?" asked Stelter. "I will confess that I was a part of this problem last year."

Dear Gullible Pundits: You may be tempted to use the word 'presidential' tonight after Trump's State of the Union, as he badly reads prepared remarks from a teleprompter. I beg you, before you do, read this to understand why describing Trump that way makes you look like a moron:

* Trump reads a speech off a teleprompter and doesn’t puke on himself
* media coverage says wow, so presidential
* next morning he returns to himself
* the rest of us save your tweets/headlines and remind you how ridiculous you look. #SOTU

I hope you're ready for three days of "presidential." Because they're coming.

Here’s what The New York Times’ Michelle Goldberg wrote in an op-ed about tonight:

After a tumultuous and divisive year in office, Donald Trump has the opportunity for a fresh start with his first State of the Union address on Tuesday. The president can surprise those who think the worst of him, and prove that he’s been underestimated. All he has to do is apologize to his fellow Americans for the shame he’s brought upon this country, and resign effective immediately.

Since that’s not going to happen, I’m begging my fellow pundits not to get too excited should Trump manage to read from a teleprompter without foaming at the mouth or saying anything overtly racist. No matter how well Trump delivers the lines in his State of the Union — announced theme: “Building a safe, strong and proud America” — he will not become presidential. There will be no turning of corners or uniting the country. At best, Trump will succeed in impersonating a minimally competent leader for roughly the length of an episode of “The Apprentice.” And if he does, recent history suggests that he will be praised as the second coming of Lincoln.

During Trump’s address to a joint session of Congress last February, there was a moment when he singled out the widow of William Owens, a Navy SEAL known as Ryan who’d been killed in a raid in Yemen the month before. “Ryan’s legacy is etched into eternity,” Trump said, as the cameras lingered on the widow’s tear-streaked face. He let the applause continue for more than a minute and a half, then said, “Ryan is looking down right now, you know that, and he’s very happy, because I think he just broke a record.”

The president’s words struck me as grossly presumptuous, as if any sort of record applause at Trump’s big speech redeemed Owens’s death. Trump had ordered the botched raid in which Owens was killed, and Owens’s father had refused to meet with the president when his son’s body was returned.

But some observers were deeply moved. “He did something tonight that you cannot take away from him — he became president of the United States,” gushed the liberal pundit Van Jones after Trump’s speech. You’d “have to be dead not to appreciate the moment,” said David Axelrod, Barack Obama’s former chief strategist. Chris Cillizza, then at The Washington Post, wrote that the speech was proof that Trump “can be, dare I say it, presidential when the moment demands it.”

Of course, it wasn’t. Instead, it proved that Trump can be a showman when the moment demands it, particularly if expectations are low and he’s reading from a script.

All is lost and don’t trust the teleprompter. This could be a bit of revenge, as conservatives used to mock Obama for his teleprompter use. I thought this was a bit of a weak sauce criticism myself, but liberals penned defenses of Obama and the teleprompter. After all, the man would become paralyzed without one.

There's one reason above all others that President Obama uses a teleprompter in delivering most of his speeches: he's good at it.

Ronald Reagan was the same way. He was more at ease in reading his speech off the dual screens of a teleprompter than looking up and down at a speech text on his lectern

Some critics say politicians who rely on teleprompters are more performers than leaders. But that really depends on what the politician says and how he says it. The teleprompter is merely a performance device. It doesn't write the speech or control what is being said.

The New Yorker (after the first 2012 presidential debate):

Let’s be clear: the theory, popular among some on the right, that President Obama is lost without a teleprompter isn’t just offensive, it’s stupid—the man wrote two books, was president of the Harvard Law Review, does more actual speechwriting than most other politicians at his level, is one of the better orators American politics has seen in some time, and on and on. He can do just fine without a teleprompter, thank you very much.

After Obama’s disappointing performance in his first debate against Mitt Romney, it’s hard not to think that he would have been better off with a teleprompter there to help him, and that he could use one when the two face off again in a town-hall debate on Tuesday night. That’s not because Obama’s dumb, or because he’s just a cypher repeating the words and thoughts of his staff. It’s because he’s too smart for his own damn good.

I understand how this sounds: an apologia for Obama—or, worse, a hagiography. “You all don’t understand Obama because he’s too smart for you.” No—God, no. I’m not even saying that Obama is smarter than Romney; I have no idea which of the two is “smarter,” and I’m not sure that such a thing would really matter. What I’m saying is that Obama has a tic seen all too often in intelligent people: “I am smart, I know many things. Let me demonstrate to you how smart I am and how many things I know.” That may be acceptable in certain situations, but it doesn’t work at a Presidential debate.

So, using a teleprompter is just a facet of the modern presidency, but now that Trump is president—it can’t make him presidential because he’s terrible or something. But Obama using it—oh, the poetry that flowed. Par for the course, but it just shows once again that a) liberals have short memories; and b) Trump Derangement Syndrome is a very real (and humorous) event to witness. As Griswold noted, Trump has not given his speech yet. I bet it will be very presidential.

Bonus: Watch these students voice their horror at Trump’s State of the Union, which, again, he hasn’t given yet.