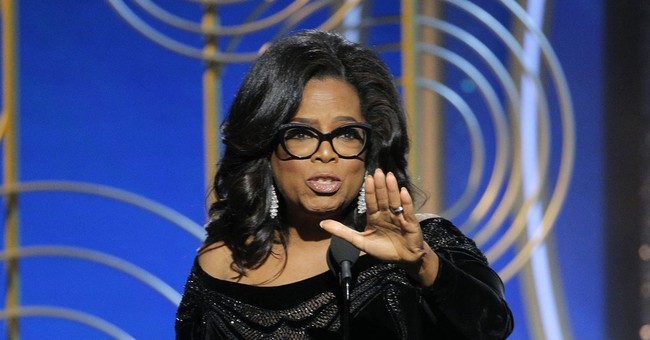 Oprah Winfrey says she’s not running for president in 2020, contrary to the liberal hopes. Her Golden Globes speech set off Winfrey fever, but there are also more than a few liberals who are just appalled by the idea. In a field that rewards and shows deference to experience, there were more than a couple liberal writers from lefty publications that were not warm to Oprah 2020. Is she a successful businesswoman and television personality, like Trump? Yes. Could she win given what we’ve seen last year? There’s no reason to say no. After all, Trump wasn’t given a chance by anyone. In the long game, the Left sees an arc of ultra-wealthy celebrities with zero political experience running the White House. I would have to admit that’s not ideal, but it also shows another problem inherent within the Democratic Party.

Long after Trump exits the White House to the cheers of legions of snowflakes everywhere I would assume, we have Nikki Haley, Marco Rubio, Scott Walker, and others to fill the bench. The Democrats have no one, and that’s what some have mentioned in their screeds against a Winfrey presidential bid. Also, for all the bellyaching about how Trump couldn’t do the job, what makes you think Oprah could. It’s the moving of the goal posts in the grossest form imaginable.

Indeed, the magical thinking fueling the idea of Oprah in 2020 is a worrisome sign about the state of the Democratic Party. That Ms. Winfrey could probably beat those considered likely front-runners — Joe Biden, Bernie Sanders, Kirsten Gillibrand — is testament to how demoralized and devoid of fresh political talent the post-Obama party has become.

Osita Nwanevu of Slate emphasized a need for a candidate that has a deep understanding of policy and an agenda based on that knowledge in her piece against Oprah Winfrey as president:

None of this is to say that political experience—that old, dry chestnut—is what counts the most here. Honesty with ourselves would force us to admit the country would be better off if we replaced every politician currently serving in Washington with a committee of social scientists, historians, and anxious, sweaty climatologists selected from the country’s major research universities at random. This is, of course, not the system of government we have, and we generally prefer filling the major political offices with people who know little, if anything, about the problems they are elected to fix. That’s an inevitable outcome of democracy, but ideally we’d be wise enough to save at least the presidency for those with deep knowledge of public policy.

The solution here is to select a president who can shape deep knowledge into a robust, truly ambitious agenda that promises a future for this country beyond the incomprehensible misery we are all barreling toward, a candidate who can wed expertise and vision with the novel political rhetoric and expression voters clearly crave. Finding that person may require us to demand more from the cast of political characters we’ve already given ourselves. It does not require that we settle for Oprah.

Well, I wouldn’t say Trump had an incomprehensible agenda. It was to deliver some economic relief to America’s working and middle classes, something that was clear on the campaign trail. Hillary Clinton had no economic message. While the president’s approval ratings are not the best, I’m bound to think it’s merely personal. Personally, a lot of people don’t like Trump, but when it comes to policy—there is notable improvement in those figures, specifically how Trump handles the economy. For the first time in 11 years, CNBC’s economic survey found that a majority was optimistic heading into 2018. Economic growth is near four percent, consumer confidence is at a 17-year high, and unemployment is at a near two-decade low. The tax bill was not some incomprehensible piece of the Trump agenda. It’s now law, and 80 percent of Americans will be getting substantial relief. Over a million workers have received bonuses since it became law, with scores of companies saying that not only are they doling out bonuses, they’re increasing employee investments in the U.S. and boosting philanthropic giving. Apple, which ahs longed to repatriate $250+ billion in overseas money, now has an opportunity to do so under a Republican president and Congress that reduced the rates. CEO Tim Cook thinks it’s good for the company and the country for him to execute this transfer, but under Obama, the rates were always in insanity-ville. Oh, as for jobs, Trump’s first year report was solid at 1.8 million created. This is not a bad agenda. And more voices were craving change—and Hillary Clinton was not their gal.

Over at the Huffington Post, concern over celebrities taking over the wheel:

Please let’s not do this again. Liberals want badly to believe they aren’t complicit in the Trump phenomenon, but what else was Trump but an expression of the same skepticism toward the actual work of politics that’s currently fueling the liberal Oprah fantasy? The dream is that Oprah is such a specimen of perfect virtue that she will create consensus wherever she walks. But the reality is that she’s so universally beloved right now largely because she is apolitical.

Oprah and Trump aren’t so different in their relation to their fans. They both offer catharsis on the cheap, with Oprah as the liberal-values alternative to Trumpism — a better, more humane alternative, certainly, but the choice of a people determined to suppress the real conflicts at the heart of the country.

Fortunately, we live in a world where we do not have only two options. Neither are we relegated to a pool of wealthy entertainers. The answer to Trump isn’t to elevate an aristocracy of celebrity right-mindedness, with Oprah or Tom Hanks ordering drone strikes with only the purest of intentions. The answer is to elevate politicians who do the politics better than the other guys. Liberals who think their program will prevail because of the nobility of their character have had the run of the Democratic Party long enough. Time’s up on them, too.

I’m not saying Oprah shouldn’t run. She very well could change her mind. She’s wealthy. She has a following. She could do it. Trump had zero experience as well and the economy is booming, he got big credit from the South Koreans for getting North Korea at the negotiating table prior to the Winter Olympics, and he won the war against ISIS, the latter of which has been buried by the news media. Yet, the rush to her being seen as the messiah does show how the Left really doesn’t have anyone in the post-Obama era of the Democratic Party. The energy is gone, as seen by the DNC’s dismal fundraising hauls and evaporation of small donors. All of that has gone over to the GOP. Sanders could run again, but he too is a symbol of the Democratic Party’s troubles. He has a shelf life. And he’ll be damn near 80 by 2020. Is that the future? The same goes for Biden, who has run twice and lost. Sen. Kirsten Gillibrand—has anyone heard of her past the Catskill Mountains? Sen. Cory Booker (D-NJ) is like a cheap, discounted version of the former Democratic president, Sen. Kamala Harris (D-CA) could plunge the party into another civil war, as Bernie supporters are not warm to her at all. There is a small governors poll, as Republicans occupy two-thirds of those mansions. Yes, their party is in trouble. No, Oprah probably won’t save them. And yes, if she does decided to run, I think Trump would beat her.