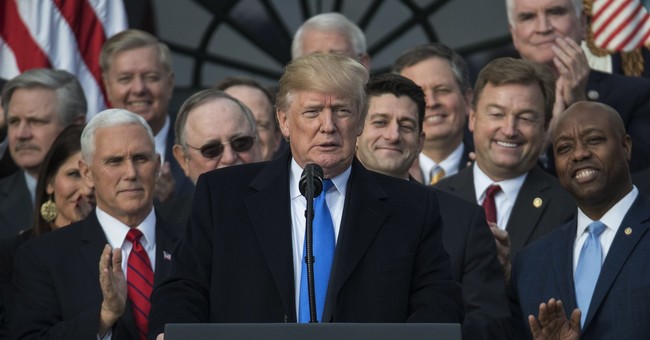 December 2017 ended on a strong economic note. Besides the economy growing near four percent, President Donald J. Trump signed the most extensive tax reform into law on December 22. Consumer coincidence is at a 17-year high. Unemployment is at a near two-decade low. A CNBC survey that was released before Christmas found that for the first time in 11 years, a majority of those surveyed were optimistic about the economy. The stock market had at least 70 record closings. And jobs growth has been solid. How solid? A quarter of a million new private sector jobs were created in December, which sent the Dow Jones to break 25,000 for the first time ever. Oh, and 2017 also saw the Dow Jones experience a 5,000-point surge, the largest annual gain in its history (via CNBC):

The report helped send the Dow to break the 25,000 mark for the first time.

Companies hired 250,000 new workers to close out the year, well above Wall Street expectations of 190,000. The month was the best for job creation since March and topped the 185,000 in November, a number that was revised lower by 5,000.

Job growth was broad based, as professional and business services led the way with 72,000 new positions. The education and health services sector was next at 50,000 and trade, transportation and utilities contributed 45,000. Wall Street-related payrolls grew by 19,000.

Heck, even The New York Times wrote about the Trump Effect on the economy. Though they added that there is scarce evidence that cutting regulations lead to better business and job creating environments, the people who actually do the job creating said that Obama’s regulatory agenda was a killer for creating jobs and growing the economy [emphasis mine]:

A wave of optimism has swept over American business leaders, and it is beginning to translate into the sort of investment in new plants, equipment and factory upgrades that bolsters economic growth, spurs job creation — and may finally raise wages significantly.

While business leaders are eager for the tax cuts that take effect this year, the newfound confidence was initially inspired by the Trump administration’s regulatory pullback, not so much because deregulation is saving companies money but because the administration has instilled a faith in business executives that new regulations are not coming.

There is little historical evidence tying regulation levels to growth. Regulatory proponents say, in fact, that those rules can have positive economic effects in the long run, saving companies from violations that could cost them both financially and reputationally. Cost-benefit analyses generally do not look just at the impact of a regulation on a particular business’s bottom line in the coming months, but at the broader impact on consumers, the environment, public health and other factors that can show up over years or decades.

But in the administration and across the business community, there is a perception that years of increased environmental, financial and other regulatory oversight by the Obama administration dampened investment and job creation — and that Mr. Trump’s more hands-off approach has unleashed the “animal spirits” of companies that had hoarded cash after the recession of 2008.

With the tax bill, there were almost immediate dividends for American workers. Over 100 companies have doled out bonuses to workers, said they would increase company investments, and boost donations. The Democratic Party has voted against all of this, a vibrant economy, the American worker, and the middle class. When this tax bill becomes more popular, and it will, they’ll have to explain this—and it won’t be pretty.