Is It Because Trump Won It? There's Been Media Silence Regarding Our Victory Over ISIS 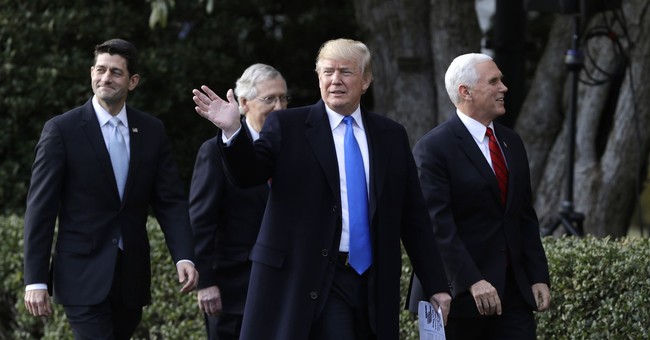 As you prepared your Thanksgiving travel plans, something happened in the Middle East. The Islamic State was defeated. The dream of a caliphate was lost; their capital, Raqqa, was captured in October. It’s over. So, why isn’t this being plastered all over the media? David French at National Review, who served in Iraq, and The New York Times’ Ross Douthat have their reasons, and yes—one of them is that the media simply doesn’t want to give Donald Trump good press. On the other hand, French did note that at times, the president does shoot himself in the foot with his Twitter exchanges, which on a side note—are entertaining (via NRO):

This is one of the best stories of the young Trump administration. While many of the battles were fought under Obama, Trump pursued the enemy relentlessly. He delegated decision-making to commanders in the field, they fought within the laws of war, and they prevailed. Trump promised to defeat ISIS, and he has delivered a tremendous victory.

Part of the blame, of course, rests with Trump himself. Peruse his Twitter feed for a moment. Aside from the occasional boast about the economy, Trump uses his favorite instrument to wage war on “fake news” and to pursue personal vendettas. It’s hard to blame the press for not reporting more extensively on the war when the president himself is directing its attention elsewhere. He’s the first president in my lifetime who somehow seems determined to distract the public from good news by creating his own bad news. We’re also understandably wary of “mission accomplished” moments. Jihadists, including ISIS jihadists, are still out there seeking to kill Americans. And we shouldn’t minimize that reality in acknowledging the momentous accomplishment of the Caliphate’s defeat. But part of the blame still rests with us. Let’s be honest: Panic and fear make for a better story than victory and peace.

Either way, it’s time for this to change. Americans died in the fight against ISIS. They restored American military victory in Iraq, preserving the gains of the men and women who fought there years before. In the process, they defeated one of most vicious and evil enemies our nation has ever faced. They helped retake cities and liberate the oppressed. They won a war. It’s a victory worth a celebration.

Granted, when you call Sen. Al Franken (D-MN) “AL Frankenstein” over his sexual misconduct allegations for example, the media is going to be all over that—especially in the “Me Too” era. Still, Trump being successful is anathema to the media. Just look at the economy. The Dow Jones rose 5,000 points this year, a first. The fourth quarter economic growth is at a solid four percent. The economy is booming, but President Trump isn’t getting the credit with the liberal media. They thought his Middle East excursions would end in disaster—and hoped that they would. It hasn’t. In fact, like our recognition of Jerusalem as Israel’s capital, Douthat credits the Trump administration for adding clarity to the overall issue, citing that perhaps the experts were a bit in a 1995 mindset when they reacted; the world has changed (via NYT) [emphasis mine]:

Douthat added that another reason for the media silence on ISIS’ defeat rests with the notion that this isn’t how the foreign policy gurus envisioned as a victory. Even Douthat, who was his skepticism of Trump, decided to use his op-ed column to offer praise of President Trump, adding that he would have been surprised if people told him Trump would win the war over ISIS.

This is also a press failure, a case where the media is not adequately reporting an important success because it does not fit into the narrative of Trumpian disaster in which our journalistic entities are all invested.

I include myself in this indictment. Foreign policy is the place where the risks of electing Trump seemed to me particularly unacceptable, and I’ve tended to focus on narratives that fit that fear, from the risk of regional war in Middle East to the perils in our North Korean brinksmanship.

Those fears are still reasonable. But all punditry is provisional, and for now, the Trump administration’s approach to the Middle East has been moderately successful, and indeed close to what I would have hoped for from a normal Republican president following a realist-internationalist course.

In particular, Trump has avoided the temptation often afflicting Republican uber-hawks, in which we’re supposed to fight all bad actors on 16 fronts at once. Instead he’s slow-walked his hawkish instincts on Iran, tolerated Assad and avoided dialing up tensions with Russia. The last issue is of course entangled with the great collusion debate — but it’s still a good thing that our mini-cold war has remained relatively cool and we aren’t strafing each other over Syria.

And the Trump strategy on Israel and the Palestinians, the butt of many Jared Kushner jokes, seems … not crazy? The relatively mild reaction to recognizing Jerusalem as Israel’s capital may be a case study in expert consensus falling behind the facts; the Arab world has different concerns than it did in 1995, and Trump’s move has helped clarify that change.

…if you had told me in late 2016 that almost a year into the Trump era the caliphate would be all-but-beaten without something far worse happening in the Middle East, I would have been surprised and gratified. So very provisionally, credit belongs where it’s due — to our soldiers and diplomats, yes, but to our president as well.

Yes, you could argue that tax reform and health care were dominating the news cycle, the special election in Alabama, scores of creepy men being exposed for their bad behavior—all of which are stories, but also stories which could be redirected to attack Republicans and President Trump. Democrats think the new tax bill is Armageddon. The special election fed into the sexual harassment narrative against Trump and Republican candidate Roy Moore, who faced horrible allegations of sexual abuse and misconduct. The Democrats even cannibalized Franken, so they could redirect attacks without people calling them out about their own members. Trump and the GOP want to gut your health care and give tax breaks to the rich, say Democrats and the liberal media. With ISIS, you have to give Trump credit for winning a war and acknowledge that the Obama’s smart power strategy in the region, not only led to the rise of ISIS with our premature withdrawal in 2011, but also the total disaster engulfing Yemen.  Saudi Arabia invaded two years ago to quell the rise of the Shiite Houthi rebels, which temporarily booted President Abdrabbuh Mansur Hadi from office and plunged the nation into civil war. The Obama administration viewed Yemen as a blueprint in counterterror operations. You’d have to rehash that, and Obama’s unmitigated failure in Syria.

So, yes, maybe Trump could not tweet and let good news marinate more in the social media orbit, but let’s not kid ourselves here; if Hillary were president and she beat ISIS, we would have endless stories about how great it is that we won, our first female commander in chief won a war—with remarks that she cleaned up Obama’s mess, and how Trump couldn’t have managed it.

I WILL DEFEAT ISIS. THEY HAVE BEEN AROUND TOO LONG! What has our leadership been doing?#DrainTheSwamp pic.twitter.com/tU0iW3Gi9v