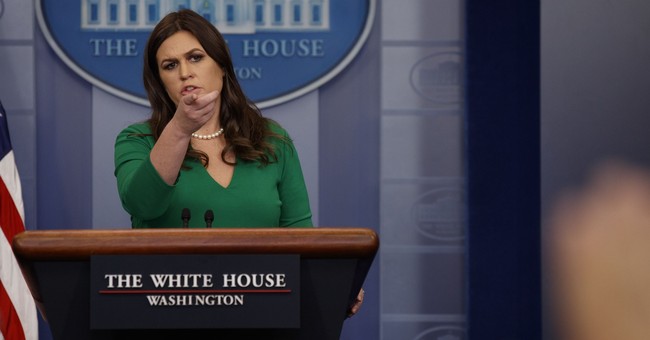 Yesterday, White House Press Secretary Sarah Huckabee Sanders got into another tussle with the White House Press Corps over fake news. It was prompted by Politico’s Matthew Nussbaum, who asked why the president is so vocal on things, like The Washington Post’s Dave Weigel’s erroneous tweet that mocked the crowd size at President Trump’s Pensacola rally in Florida on Friday, but remains silent on actual disinformation campaigns, like the one Russian ran last year. That’s when Sanders responded by noting the news media’s disastrous couple of weeks in their reporting on this White House, adding that any misinformation is taken seriously. She did note that this hasn’t been discussed at length with the president.

At this point, CNN’s Jim Acosta decided to jump in, saying that journalists aren’t fake news for honest mistakes. Playboy Magazine’s Brian Karem can also be heard in the background. That’s when Sanders had enough, noting that it’s not an honest mistake when the media puts false information out there for public consumption (via White House) [emphasis mine]

NUSSBAUM: Thank you, Sarah.  The President reacted quite angrily over the weekend to a Washington Post reporter's tweet about crowd size that was quickly deleted.  I'm wondering if you could help explain the discrepancy between the President's reaction to incidents like this, which he calls "fake news" and talks quite a bit about, and his silence on actual disinformation campaigns like Russia ran during the 2016 election to deliberately spread false information.  So both his silence on that, and does he recognize the difference between these two?

MS. SANDERS:  Look, the President is simply calling out a very direct and false accusation lodged against him.  There was nothing more than an individual trying to put their bias into their reporting, and something that, frankly, has gotten a little bit out of control.We've seen it time and time again over the last couple of weeks.

A number of outlets have had to retract and change, and rewrite, and make editor's notes to a number of different stories -- some of them with major impacts, including moving markets.  This is a big problem and we think it's something that should be taken seriously.

MS. SANDERS:  I haven't spoken with him about that, but certainly we would take any misinformation like that very seriously.  But it's not something we're comparing the two on.

JIM ACOSTA: And I would just say, Sarah, that journalists make honest mistakes and that doesn't make them fake news.

But the question that I --

MS. SANDERS:  But when journalists make honest mistakes, they should own up to them.

BRIAN KAREM: We do.

ACOSTA:  The President hasn’t -- This wasn’t going to be my question.

KAREM:  You mean like tweeting stuff on the Middle East --

KAREM: He retweeted something that was completely fake, Sarah.  Can he admit it?

MS. SANDERS:  You cannot say that it's an honest mistake when you're purposefully putting out information that you know to be false, or when you're taking information that hasn't been validated, that hasn't been offered any credibility, and that has been continually denied by a number of people, including people with direct knowledge of an instance.  This is something that --

KAREM:  Are you speaking about the President?

MS. SANDERS:  I'm speaking about the number of reports that have taken place over the last couple of weeks.I'm simply stating that there should be a certain level of responsibility in that process.

ACOSTA: This is not the line of questioning that I was going down, but can you cite a specific story that you say is intentionally false; that was intentionally put out there to mislead the American people?

MS. SANDERS:  Sure, the ABC report by Brian Ross.  I think that was pretty misleading to the American people.  And I think that it's very telling that that individual had to be suspended because of that reporting.  I think that shows that the network took it seriously and recognized that it was a problem.

Okay—I will concede that we don’t know if Ross purposefully put out his misleading December 1 report that originally said that Donald Trump ordered Michael Flynn to make contact with the Russians during the 2016 election. It was actually after Trump had won the election, after he was known as president-elect, and the instruction to make contact with the Russians was your atypical diplomatic groundwork laying for an incoming administration. ABC News got the dates wrong—way wrong. It was not fully vetted. It was based on one anonymous source, but Ross went on air and ran with it anyway. He was suspended for four weeks without pay for this blunder. The markets dipped 350 points over this story, which took several hours to correct. It was a total nightmare. Was it an honest mistake? Or was this meant to stoke the anti-Trump flames? In times past, I would give the benefit of the doubt here, but the mainstream media has been peddling total crap for months. Over at CNN, they can’t report on how the president and the Japanese prime minister fed coy fish properly. When you botch feeding of coy fish to push an anti-Trump narrative—Trump overfed the coy—you can see why trust in media isn’t that stellar.

It's amazing to watch CNN stand up and defend the anonymous sources who burned their credibility like this. Must be pretty important and well connected sources then, definitely not part of the House intel committee. https://t.co/8lxIRBdP8R

Yet, there have been other instances where total nonsense was disseminated—and this is before Trump was elected. We’ve had Dan Rather engulfing 60 Minutes in controversy back in 2004 over the Killian Documents and George W. Bush’s service record in the Texas Air National Guard. Those turned out to be doctored. NBC News’ Brian Williams had a lengthy history of being a fabulist, becoming the punch line for weeks for his false reporting. He was suspended for six months for his antics. Rolling Stone writer Sabrina Rubin Erdely debunked gang rape story at the University of Virginia saw her mythical writing landing her in legal trouble, being found guilty of defamation last year. From the deceptive editing of the 911 calls during the Trayvon Martin case by MSNBC to Katie Couric manipulating an interview with pro-gun rights advocates to cast them in a negative light—there seems to be a lot of evidence to back up that not all of these are entirely honest mistakes. Many are quite deliberate, as Fox News’ Stephen Miller pointed out on social media. There’s no winning this for the media. Given their recent trip ups, they’re either peddling crap reports to fan the flames of a narrative, or they’re totally incompetent. You decide?

It is beyond offensive for Sarah Sanders to say that journalists are purposely reporting false information to forward some sort of agenda.