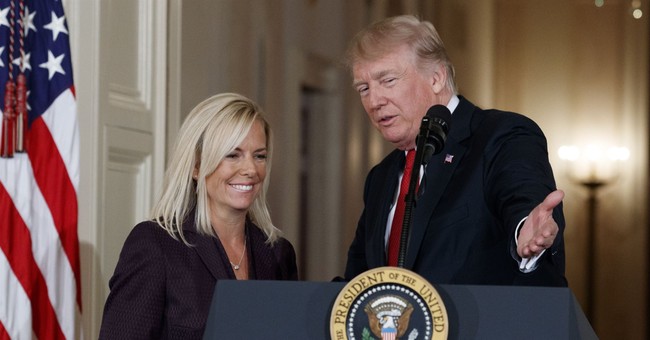 Well, the Department of Homeland Security has a new secretary. Kirstjen Nielsen was confirmed by the U.S. Senate to helm the department. Nielsen will be taking over for her former boss, White House Chief of Staff John Kelly, who previously held that position (via NYT):

The Senate voted on Tuesday to confirm Kirstjen Nielsen as the secretary of homeland security, elevating a top White House aide and former agency official to oversee the department central to President Trump’s plan to crack down on illegal immigration and beef up border security.

Elaine C. Duke, a deputy Homeland Security secretary, has served as the acting secretary in the interim. Ms. Duke has said she would remain at the department in the No. 2 position, tamping down speculation that she might resign after Ms. Nielsen was installed.

Prior to this appointment, Nielsen served as Kelly’s deputy White House chief of staff, but reportedly acted in a “dismissive” way, according to Politico. The publication also added that there was a lack of “collegiality” with Nielsen, with some staffers referring to her as “nurse Ratchet” a mere five weeks into the job back in September:

Chief of staff John Kelly’s no-nonsense deputy, Kirstjen Nielsen, has been working in the White House for only five weeks.

But in her short tenure, the new sheriff’s No. 2 has already helped set a new tone in the West Wing that was described by more than 10 senior administration officials and outside advisers to the president as one that can be dismissive and lacking in collegiality. These people worry that Nielsen — who now occupies former chief strategist Steve Bannon’s old office — is at risk of squandering the morale boost that accompanied the arrival of the four-star general and the hope for a fresh start.

Nielsen, who served as Kelly’s chief of staff at the Department of Homeland Security before moving with him to the West Wing, routinely cancels meetings with senior officials if someone shows up late, multiple aides said. Phone calls often go unreturned.

It’s a job that by nature breeds enemies, not allies. But Nielsen has been greeted by an especially vociferous backlash from a group of people who say they are not simply bridling at a new structure. Some Trump loyalists even refer to Nielsen behind her back as “Nurse Ratched,” a reference to the malevolent head nurse in “One Flew Over the Cuckoo’s Nest,” who coldly presides over a mental hospital.

Whatever the case, a vacancy opened up at DHS and being chief of staff under Kelly when he oversaw the department, this was probably an easy decision concerning her appointment. Nielsen will now be part of the ever-growing saga on the Hill regarding what Congress is going to do about illegal immigration and the recipients of the Deferred Action for Childhood Arrivals program.