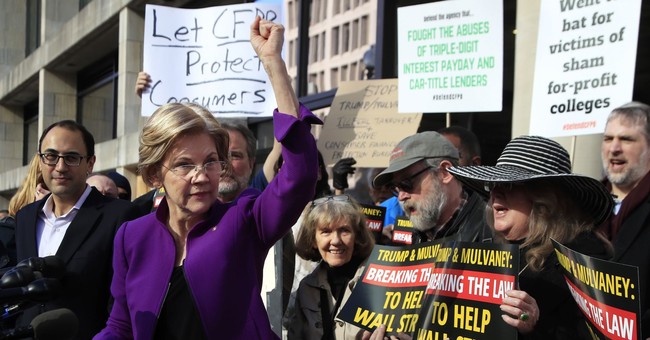 Okay—so we’re back on this again. Some liberal Democrat from Massachusetts who feigned being Native American now takes offense that President Trump referred to her as “Pocahontas” during a ceremony honoring the Navajo code talkers for their heroic service during World War II. Was it unseemly? Maybe, but Warren is acting outraged as if she is a bonafide Native American. She is not. She’s just a white woman who seems to have executed a racial hoax for academic gain. Heck, even Trevor Noah of The Daily Show said Warren’s claims to Native American lineage were problematic. Now, an op-ed from an actual Cherokee woman in the progressive Think Progress torches Warren for peddling this farce, which she seems to be cognizant of since she’s avoided Native American groups:

As a young Cherokee woman, one would assume that I would take Warren’s side in standing up against Trump’s racist remark. Following the incident, Warren lambasted the president, telling MSNBC that Trump has done “this over and over thinking somehow he’s going to shut me up with it. It hadn’t worked in the past, it is not going to work in the future.”

She was not a hero to me when she failed to foster a haven of support for Native students within Harvard University’s alienating Ivy League culture. She is not a hero for spending years awkwardly avoiding Native leaders. She is not a hero because, despite claiming to be the only Native woman in the U.S. Senate, she has done nothing to advance our rights.

She is not from us. She does not represent us. She is not Cherokee.

In defending her supposed Native identity, Warren has drawn from both racist stereotypes and easily refutable stories about her family. At a 2012 press conference Warren stated that her family knew her grandfather was “part” Cherokee because “he had high cheekbones like all of the Indians.” Cherokee genealogists have pored through her family history to find that “None of her direct line ancestors are ever shown to be anything other than white, dating back to long before the Trail of Tears.” To add insult to injury, despite Warren’s public claims of Native American heritage, she has decidedly avoided talking with Native leaders and, in 2012, refused to meet with a group of Cherokee women at the Democratic National Convention.

Yeah, Elizabeth Warren is said to be many things. Being a member of the Cherokee Nation is not one of them. I know they’re not going to do this, but the Left should just move on from this. There’s literally nothing to defend. At the same time, it does provide high quality popcorn entertainment for the rest of us. Isn’t cultural appropriation supposed to be a big no-no in progressive circles? Oh, right—Warren is a liberal Democrat. Accountability need not apply.