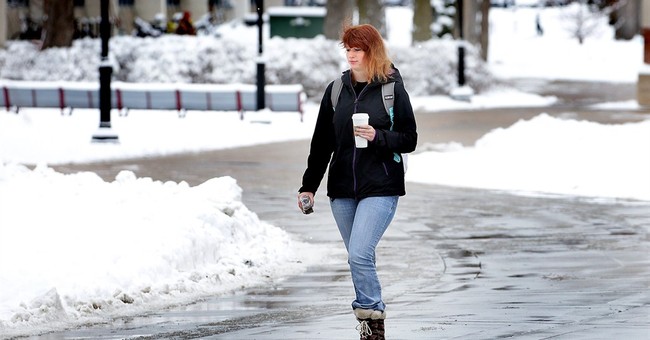 Well, one College Democrat is no longer in her leadership position after she tweeted that she hated white men. Campus Reform and Media Trackers both reported that Sarah Semrad, a junior at the University of Wisconsin-La Crosse, tweeted “I f**king hate white men.” When Media Trackers first reported on the story this week, Semrad sprinted for the digital bunker, deleting her social media accounts, but the Internet is forever. According to Campus Reform, this isn’t the only controversial act she has voiced on social media:

Semrad’s recent tweet is not the only controversial statement made by the Wisconsin College Democrats Vice Chair in recent weeks. Another image of her Twitter profile obtained by Campus Reform appears to show Semrad admitting to “tearing down all the pro life Christian pregnancy resource center fliers” that were posted on campus.

“My new bit is tearing down all the pro life Christian pregnancy resource center fliers that they put up around campus to try & trick people,” Semrad allegedly tweeted in October.

Now, Semrad has decided the best thing for her to do is step aside from her College Democrat chapter. She issued a statement and an apology as well (via Washington Times):

A spokesperson for the College Democrats of Wisconsin told Campus Reform that Ms. Semrad had stepped down as vice chair as of Tuesday.

“She is no longer involved in the organization,” the spokesperson said. “She resigned, and as of this morning, is no longer a member of our executive board.”

“In a moment of impulsivity and immaturity, I posted the tweet about white males as an expression of frustration towards my male friend who wouldn’t ask for directions,” she wrote in an email to the [La Crosse] Tribune. “My tweet about posters described my actions after I saw and removed one poster that was hanging on campus that had not received proper university approval for on-campus posting.

“I recognize that my words were neither humorous nor harmless, and sincerely apologize to all who have been hurt, offended or embarrassed by them,” she said. “My commitment to social justice remains steadfast and will not be deterred by these events, and I vow to use the maturity and sensitivity that would reflect that going forward.”

College campus liberalism at its finest.