VA Gov Race: Democrats Are Tumbling and Crashing Across The Finish Line 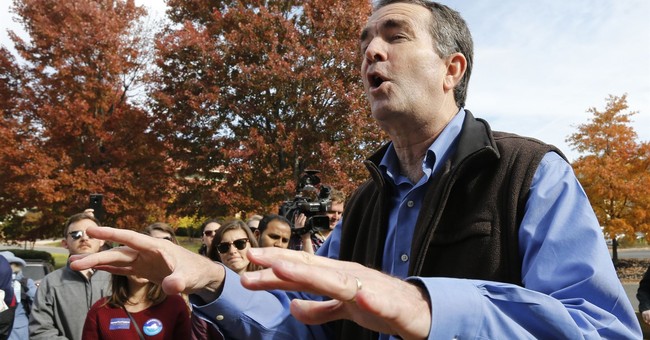 Well, we’re here. We’re at the finish line for this increasingly nasty Virginia governor’s race—and the Democrats are stumbling and crashing across that line. This shouldn’t have been a hard sell for the party. Democratic Gov. Terry McAuliffe is popular. He’s focused mostly on economy and boosting business for the state. If Virginia governors were allowed to run for consecutive terms, McAuliffe would probably win in a landslide. Oh, and he did well by fixing the concealed carry reciprocity issue that was brought on by Attorney General Mark Herring, who is running for another term. Yet, this is an off-year election. Democratic candidate and Virginia Lt. Gov. Ralph Northam isn’t a person who necessarily oozes charisma. Another irony is that Ed Gillespie, the Republican candidate, was the chairman of the RNC under George W. Bush, and acted as his counselor towards the tail end of his term. Northam voted for Bush twice, which is something that hasn’t gone unnoticed by the more left wing elements of the Democratic Party.

Why has this race tightened up? Besides the obvious reasons, just look to the 2016 election. A lot of Democratic strategists see Northam making the same mistakes that Hillary Clinton made, which cost her the election to Donald Trump. It’s all part of the Democratic Party’s civil war, which is we described as one of silent fury since the news media is more concerned about the non-internal struggle between Trump and Republican leadership.

Stanley Greenberg, the veteran Democratic strategist, on Capitol Hill, later that morning, it was not the distractions of the Trump White House that had him worked up. Greenberg was still fuming about Hillary Clinton.

Clinton was guilty of “malpractice” in how she conducted her 2016 Presidential campaign, Greenberg told me. Even worse, he said, Democrats were repeating the same political mistakes a year later. “Look at Virginia right now,” Greenberg said, as soon as we sat down in his second-floor office. “We have a candidate”—Ralph Northam, the Democratic gubernatorial nominee—“running as Hillary Clinton. He is running on the same kind of issues, and has the same kind of view of the world. It’s the Republicans who talk about the economy, not the Democrats.”

It also doesn’t help that Northam evaded completely the issue of coal power, which is the life’s blood of rural Virginia. A story about coal is always in the local news in these areas, and they have not forgotten about Hillary Clinton’s remarks about putting coal workers out of business from 2016. The rural areas once again were abandoned in this race, as Democrats continue to opt to focus their concentration on nonwhite and white progressive voters who huddle in the urban areas. Yet, even in these areas, nonwhite voters have felt a very low energy campaign from Northam, which is probably why the Latino Victory Fund ad featuring a Gillespie supporter in a pickup truck running over Asian, black, Muslim, and Hispanic kids was pushed out in the waning days of the race. Oh, and despite what Northam says about that ad not being part of his campaign, it looks like it was a coordinated effort between LVF and his campaign; LVF marked it as a $60,000+ in-kind media contribution, which in Virginia, means Northam probably signed off on it. Northam also tried to link Gillespie to the white nationalists who descended into Charlottesville last August to protest the removal of a Robert E. Lee statue (supposedly). In the melees between this crowd and the left wing Antifa thugs, one woman was killed and scores of others injured when a white nationalist used his car to plow through counter protesters.

Gillespie denounced the rally. The Virginia press thought the mailer was bush league, with The Daily Progress, a Charlottesville-based paper, slamming Virginia Democrats for using their pain to score points in the race. Oh, and then there was the sanctuary city flip-flopNortham executed, which caused heartburn among liberal groups, with one—Democracy For America, pulling out while calling the lieutenant governor’s campaign racist. Still, the Northam campaign maintain they’re united when it’s actually a full-blown s**t show. Donna Brazile’s book, which seemed to shed more light on the Democrats’ civil war, also didn’t help. On top of that, let’s not forget that the Northam campaign removed Justin Fairfax, the black lieutenant governor candidate, over a labor union’s objections, which can only be looked at as a snub against black voters in the state. The Washington Post had a good article about how the Democratic coalition in Virginia is coming apartin the final hours. Concerning messaging, it’s clear that Gillespie has run the table on that, with Democrats admitting as much [emphasis mine]:

During a live interview on MSNBC, anchor Katy Tur repeatedly pressed Northam, the Democratic candidate, about Brazile’s book. “The Democratic Party is not very popular, and there is concern that the progressive wing is going to rip apart from the establishment wing,” she said. “Are you concerned that you could be the first potential victim of that rift?”

Environmental groups are angry at Northam for declining to condemn two natural gas pipelines planned in rural parts of the state, but trade unions like these pipelines because they mean jobs. Fairfax, who is on the ballot separately from Northam, is an outspoken critic of the projects. As a result, some unions have declined to support him.

The Laborers’ International Union of North America asked the Northam campaign last month to print fliers that omitted Fairfax, who is African American, so they could be distributed to members. Fairfax called this “a mistake,” and Northam’s campaign quickly apologized. But not before Quentin James, the founder of Collective PAC, which supports black candidates, including Fairfax, said “it reeks of subtle racism, if not a tone deafness about how we are going to win in November.” (African Americans make up 20 percent of the Virginia electorate.)

Wilder, who became the nation’s first elected black governor in 1989, said that he hasn’t spoken with Northam in months. The 86-year-old has endorsed Fairfax but not Northam. “Justin, in my judgment has not been dealt a good hand,” he told the Richmond Times-Dispatch after the Thursday forum.

Adding insult to injury: Democracy for America, a liberal activist group that was founded by Howard Dean after his 2004 presidential campaign, announced Thursday night that it is no longer doing “any work to directly aid” Northam's campaign after he announced that he’d ban sanctuary cities if one ever appears in Virginia. It represented a shift from his earlier position.

Charles Chamberlain, executive director of the Vermont-based group, said the Northam campaign was running “the same old, broken, and racist playbook that lost Democrats over 1000 elected offices since 2008.”

Some in the party establishment feel that outside groups like DFA, and to a lesser extent LVF, are more interested in trying to raise money and build their own profiles than win elections. The Latino Victory Fund was only going to spend a paltry $30,000 to run the spot on Hispanic TV. DFA was not doing anything significant in Virginia until it decided to decry its party’s nominee. When you load the news release on their website, a pop up tries to get you to sign up for their email list (i.e. fundraising solicitations). Republicans experienced similar problems in 2010, when scores of “tea party” groups popped up and attacked GOP incumbents for being insufficiently anti-Obama (because that raised the most money).

Democratic strategist Carter Eskew, who ran the advertising operation for Al Gore in 2000, criticizes Northam’s commercials in a blog post for not having a clear message: “Based on the dozens of ads I saw this weekend (unlike many viewers, I actually pay close attention to them), Gillespie has a clear strategy and messaging to support it. … Meanwhile, Northam seems stalled with less than a week to go. Based on his ads, his strategy seems defensive and soft. In one ad, he finally responds to Gillespie’s charges that he is weak on crime, which is a fine example of the political rebuttal genre, but not where you want to be at this point in a campaign. … His positive ads tout his experience as an Army doctor and civilian pediatrician and links his love for children to wanting to build a better future for them. He will need a large gender gap to win, but I’m not sure that in these selfish and uncertain days, people are willing to wait for their children to grow up for things to get better, especially when Gillespie tells them he’ll cut them a check right now.”

David Wasserman of Cook Political Report was also tweeting why Democrats should be nervous about Virginia. He also pointed out areas to watch. Northam has to over perform in Tidewater, near Richmond, while Gillespie has to match his 2014 numbers when he ran for Senate in the midterms. Locking those numbers up, plus a strong showing in rural Virginia (Wasserman said Gillespie matching Ken Cuccinelli’s ’13 performance in these areas), and he’s governor.

It's also difficult to see Northam doing much better than Clinton in rural VA given confederate monuments drama/muddled pipeline position.

In my view, that means Northam must count on overperformance in Tidewater (home base) & higher Dem engagement across board thanks to Trump.

One positive sign for Northam is that election interest is up vs. '13 in Dem/Latino localities like Manassas/PWC. https://t.co/LkLwnUAJzM

Ace Of Spades Decision Desk also had their projections.

But, and here's the big but: the rural VA Stewart-Trump voter who may have rolled his eyes at Ed and even chuckled at him a month ago,