Hey CNN, You Should Probably Pull This Post About The Trump Dossier 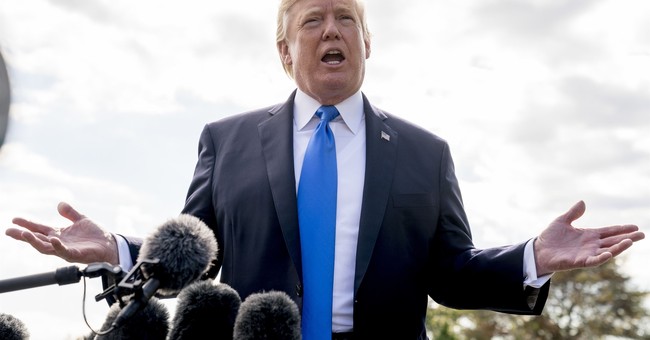 CNN prides itself apparently in being a facts first organization. There’s that idiotic apple ad they’ve been running. This is what CNN’s Chris Cillizza wrote on October 19, which pretty much slams President Trump for suggesting that the FBI, the Democrats, and Russia might be conspirators with these files. It was in reaction to a tweet in which the president said, “Workers of firm involved with the discredited and Fake Dossier take the 5th. Who paid for it, Russia, the FBI or the Dems (or all)?”

Workers of firm involved with the discredited and Fake Dossier take the 5th. Who paid for it, Russia, the FBI or the Dems (or all)?

He is suggesting that a dossier prepared by a former member of British intelligence has not only been totally discredited (it hasn't -- more on that in a minute) but that it might have been funded by some combination of Russia, the Democratic Party and, wait for it, the FBI!

Let's start with the facts.

At issue is a dossier prepared by Christopher Steele, a former British spy, which details explosive allegations about potential ties between Trump's campaign and Russia. The dossier's more salacious elements regarding Trump have drawn most of the attention -- and remain totally unproven. But it appears as though US intelligence officials do take some chunk of what Steele found quite seriously.

The bigger issue -- at least to me -- is that Trump is suggesting that the dossier itself was funded by some combination of a foreign power, the opposition political party and a federal law enforcement agency.

It's easy to roll your eyes at the very suggestion and dismiss that idea as just Trump being Trump. "You guys always take him literally," Trump's supporters will say. "You shouldn't!"

OK. But here's the thing: President Trump is, um, the President. Which means he is held to the same standard every past president is held to. And by that standard, this tweet is crazy.

The point here is that it is deeply irresponsible for a president of the United States to even flirt with this sort of conspiracy talk. You can love Donald Trump and still believe that the idea that the Russians, the Democrats and the FBI co-funded a dossier designed to discredit Trump's 2016 campaign is totally bonkers.

Flash-forward to October 24, that unverified Trump dossier was a Democratic-funded operation. Marc Elias, a lawyer with the Hillary Clinton campaign and the Democratic National Committee, retained Fusion GPS who then paid former MI6 operative Christopher Steele to gather information on Donald Trump. This dossier serves as one of the reasons why we have a special counsel investigating possible collusion between the Trump team and the Russians. The Washington Post had the scoop—and they noted that this was solely a Democratic-funded event. It’s true that this effort started out as an opposition research event by an anti-Trump Republican, but the Democrats only paid Steele:

Some of the pushback on the left has focused on the fact that a still-unidentified Republican client retained Fusion GPS to do research on Trump before the Clinton campaign and the DNC did. Thus, they argue, it's wrong to say the dossier was just funded by Democrats.

But The Post is reporting that the dossier's author, Steele, wasn't brought into the mix until after Democrats retained Fusion GPS. So while both sides paid Fusion GPS, Steele was only funded by Democrats.

And here’s the rest:

Oh, and about the FBI:

After the election, the FBI agreed to pay Steele to continue gathering intelligence about Trump and Russia, but the bureau pulled out of the arrangement after Steele was publicly identified in news reports.

So, yeah, it’s Trump. It’s rough around the edges. Some of it is still unverified, like the dossier, and there is no evidence that this was a conspiracy between Democrats, Russia, and the FBI. It does pave the way for more questions about this whole Russia collusion story in general, which I have maintained was a bunch of bunk. Overall—it looks like the essence of what Trump suggested wasn’t insane. For former Bush aide Ari Fleischer, he tweeted that it looks like...collusion.

Questions for Comey: Did he know? If not, why didn't he ask? Did FBI rely on a Democrat-funded oppo document to get warrants on Trump folk? https://t.co/u7tPynhv6f