Cosmopolitan Reminds Us All How Progressives Have Killed Halloween 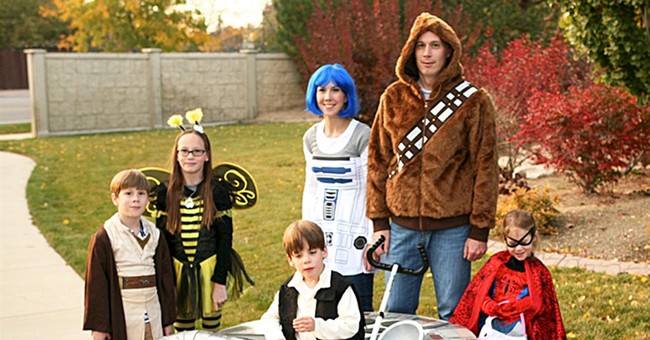 You know, there was a time when a kid could be anything without the soft, insufferable, self-righteous urban left wing professional making everyone as miserable as them with their crusades against BBQ (burgers cause global warming), microaggressions, and now Halloween costumes. Cultural appropriation is now the topic of concern with the left wing loony tunes because dressing up like Moana, a fictional character, might degrade Polynesian peoples to stereotypes, or something. Right, because eight-year-olds are totally in sync with the garbage principles of the cesspool that is American progressivism. Halloween is not the Devil’s holiday either, folks. It’s simply a time to get dressed up and get an ungodly amount of candy. For the adults, it’s dressing up and getting plastered. It’s simple.

Well, to make sure we didn’t forget this nonsensical crap, here’s Cosmopolitan magazine:

The New York Post recently highlighted an article on raceconscious.org about how that's probably not a good choice if your kid is white, and revealed that "moms are freaking out" over the culturally appropriative costume. Needless to say, the Post's coverage has only amplified the debate around what does, and doesn't, constitute cultural appropriation. Last year, Disney came under fire for its Maui costume, which depicted the demigod's painted brown skin. The company ultimately pulled the costume in response to the uproar, telling Entertainment Weekly in a statement that "The team behind Moana has taken great care to respect the cultures of the Pacific Islands that inspired the film, and we regret that the Maui costume has offended some." The Maui question may have been settled, but this year, there are plenty of tweets out there asking the internet (and Lin-Manuel Miranda) if it's OK to dress as Moana for Halloween.

The original article, written by Sachi Feris, discusses how her white daughter was torn between dressing as Elsa, from Frozen, or the titular character from Moana. Feris expresses concern that while an Elsa costume might reinforce notions of white privilege, dressing up as Moana is essentially cultural appropriation — the act of reducing someone's culture to stereotypes, and thereby belittling it. Though Feris puzzles over how one might wear a Moana costume respectfully, she ultimately decides it just isn't a good idea.

At this point, you might be saying something like: "But, I dressed up as Jasmine as a child, and I'm not a racist!", or, "It's just a Halloween costume, please chill the f*ck out." But one of the best things about time is that it moves forward. You should too. You can (and should) strive to be better than you were 10, 20, or 30 years ago. If you missed the mark when you were younger, maybe think about using this Halloween as an opportunity to teach your kids about the importance of cultural sensitivity. If your child's dream costume feels questionable, don't just throw up your hands and hand over your credit card. You're the parent here, and the onus of what your child wears falls on you. If your kid wears a racist costume … you're kind of wearing it too.

I'm gonna be blunt:
You cannot beg for more diverse princesses AND ALSO tell kids they can't pretend to be those girls https://t.co/CNoGifAPpY

Six year olds can be trusted to choose a gender, why not a Halloween costume?

Okay—I’ll say it: chill the f**k out. I wanted to be a soldier from the American Civil War when I was a boy. No union costumes existed, so I was a Confederate. I didn’t care. That was probably one of the best Halloweens I ever had. Also, the people whose doors I knocked on to grab my candy didn’t give me weird looks. It’s Halloween. It wasn’t a pet project of the Left by then. It was also a time when Democrats were somewhat normal people. So, I would like to say thank you, Cosmopolitan magazine for this article. It helped me relive fond memories as a Confederate general.