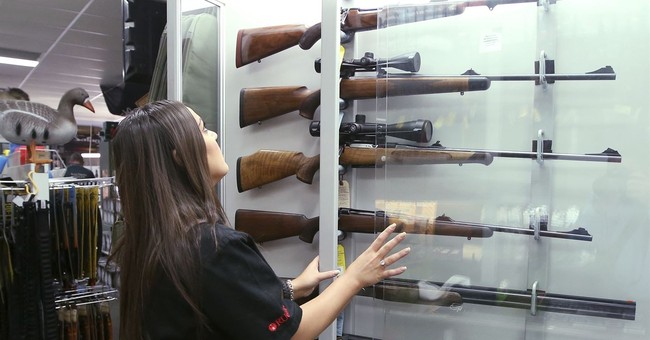 On social issues, young Americans are decidedly liberal. On abortion, that issue more down the line, split evenly, but on gay marriage, LGBT issues, and the loosening of drug laws, specifically those relating to marijuana, the fight is over: they’re liberal. An appalling number of Millennials have favorable views of socialism, yet their left wing lurch hits a wall when it comes to gun rights. Or does it? They’re not keen to support renewed calls on so-called assault weapons bans, even in the midst of horrendous mass shootings. They’re open about concealed carry. They acknowledge that the Second Amendment guarantees an individual’s right to own a firearm, but there could be a silent majority concerning the gun rights war: gun owners, who shun the National Rifle Association, but are also open to concealed carry and other gun control regulations. They’re right smack dab in the middle of the road; they’re just quiet about it.

Politico’s Ben Wofford ventured into Texas, University of Texas at Austin to be exact, and spoke with numerous students, around 60, and there was no definitive position. Some were supportive about campus carry, but did not like the direction that the NRA has taken recently on gun rights. Others were against campus carry, but held open opinions about gun rights in general. Alas, have we reached a new hypothesis, where there is support for gun control, but also respect for the rights of the gun owner? Wofford aptly noted the changing themes of the debate, how not too long ago there was healthy support for the banning of handguns; the Coalition to Stop Gun Violence's original name was National Coalition to Ban Handguns. Then, the 1992 LA Riots erupted and the notion of owning guns for self-defense took hold and has remained an entrenched position in the Second Amendment “debate.” Since then, the gun rights movement has scored a slate of critical victories at the ballot box and in the courts. The only areas for the pro-gun control crowd to maneuver in are states that already have strict gun laws (i.e. Democratic states):

Polling in gun politics is notoriously murky—much lies in the crafting of the question—but demographers have consistently reported a conservative streak in millennial attitudes on guns. Respondents aged 18-29 are the least likely in the country to support a renewed ban on assault weapons, at 49 percent, a fact that has helped drive nationwide support down to a record low. Pew’s data suggest that those falling in the youngest age range have dropped the furthest in support for “gun control” since 2000 (when the alternative is presented as “gun rights”). And when the question concerns the National Rifle Association’s top legislative priority, concealed carry, millennials appear to lead the country. According to Gallup’s version of the question in 2004, the notion that concealed guns made for safer spaces polled at 25 percent; 11 years later, it registered at 55 percent nationally. The greatest support came from those ages 18-29, at 66 percent, a full 10 points greater than the next highest scoring demographic.

During the week campus carry was unfurled at UT Austin, I met dozens of students caught in the teeth of this culture war—a kinetic, real-life sample of the future of gun politics. It was there that I met Zach Stone, 22, a square-jawed, first-year law student. A member of the student government—and a Democrat staunchly opposed to the campus carry measure—Stone had moderated a formal debate on campus between the pro-gun and anti-conceal students (this was after the law had passed). Like most students, Stone still thinks allowing guns on campus is an absurd idea, and he harbored grave doubts about concealed carry’s training requirements—he wrote a much-discussed New York Times op-ed on the topic. But beyond the campus carry issue, Stone also told me he has since become used to students seeking a way to reconcile gun ownership with strict regulations, even while they claim no fellowship with the NRA.

“What we’re seeing is, concealed carry isn’t necessarily viewed as a threat to gun control,” said Vance Roper, a graduate student who sat on UT’s concealed carry implementation committee, which sought input from thousands of students. An Army veteran, Roper told me that he had recently quit his membership with the NRA out of disagreement with its hardline stance, and the way that it punished moderates. “This is what the pollsters are missing,” he continued. “You can be for gun rights and still for reasonable restrictions. I think that’s the problem—it’s hard to double around that question, and really hit it, but what they missed in the survey is asking millennials a specific question: Is concealed carry a part of gun regulation?” Roper is a self-described gun guy—he owns a few—and thus disposed to be favorable to concealed carry. But he speculated that because concealed carriers are, in theory, themselves subject to the kinds of background checks and training requirements millennials might want for other gun transactions, it could explain their support: “What we don’t know is, if somebody has concealed weapons, do you care—do you feel more secure because that person has had a background check and training?”

Plenty of people, of course, do not feel more secure around guns—such as the vast majority of the protesters who turned out at UT Austin, which included students and faculty alike. Last year, Jennifer Glass, a tenured professor of sociology, sued the university with two colleagues for allowing the concealed guns into classrooms. Glass has been advocating tighter gun control for many years, and few experts I’ve met in the country have sported such a rapid-fire mastery of facts and data: Sitting in her glass office, she built a meticulous case for mitigating the total number of guns in society under the auspices of public health, a political approach that has gained traction in recent years. In this strategy, generational change would play a central role. Glass compared guns to cigarettes. “People felt the peer pressure to stop smoking a long time before we had these smoke-free zones,” she told me. And, Glass suggested, “As more people live in cities, [and] more people get higher education, then we’ll see the same peer pressure to stop carrying, stop showing, stop holding, and limit the places where the general population feels comfortable encountering weapons.”

One student, a graduating senior named Andrea Fuentes, had told me she rejected her acceptance offer to a prestigious graduate program at UT because of the handguns. She had also joined some of the protests. I steeled for a fierce viewpoint. Instead, Fuentes displayed striking equanimity. The debate at UT Austin, she said, “led me to be able to have a certain level of respect for some gun advocates. I definitely still don’t think that it’s necessary on a college campus. I think there’s a line that needs to be drawn somewhere.” She was clear in her adamancy that campus carry had gone too far. But her attitude toward gun culture was largely quizzical, not contemptuous. “I don’t know. I see both sides of it,” she told me. “I feel like every single person that I’ve talked to about it has kind of had something different to say.”

On my last day in Austin, I met a young law student, who we’ll call Michael Malden. That he asked to withhold his real name was the reason for intrigue: Sitting at a dining room table with his girlfriend, Malden explained that he took the more-guns-more-regulation viewpoint, and he hated the NRA. But he also owned a few rifles in his off-campus housing, which he showed me—all family hand-me-downs—and he felt terrified about what might happen to his reputation if he ever articulated his support for concealed carry. He said he was still making up his mind on campus carry.

His girlfriend spoke up. “A guy like [Michael]—these sorts of people in the middle who aren’t some radical gun nut, the people who are sort of in a more moderate position, are very disincentivized from speaking out.”

Speaking with Malden, I was struck by the sense that I was staring into the eyes of the gun control movement’s best opportunity: White, gun-owning males disillusioned by the NRA. This was the next wave of undecided citizens, still making up their minds about guns. Roper told me he thinks the tens of millions of gun owners who lie beyond the NRA’s reach—like him—are the fulcrum in the gun debate. Where will they go? The NRA? Or someplace else?

This is interesting and it should be a welcome challenge for those of us who support the Constitution, civil rights, and the Second Amendment. Is this due to the pro-gun rights movement taking too hard of a stance or because we’ve averted having a serious debate on this issue? Often times, the pro-gun control wing spews their nonsense and we have to play defense. Our side wins. And then we go about our business after a few weeks. If this moderate wing of gun owners exist, the Bloomberg consortium of gun control groups will surely edge them our way since it doesn’t take a genius to know that expanded background checks is not their end game. It’s the heavy regulation and eventual confiscation of firearms in America. It’s the destruction of the Second Amendment. Every action item they have and want is pure crap. No, smart guns will not stop future mass shootings. Safe storage won’t prevent more shootings either and neither will background checks. The cumulative effect is not less gun violence; it’s the chipping away of American civil rights and erecting more obstacles to a citizen’s right to self-defense. Also, most of the regulations these people are for (background checks etc.) are probably already law. We have to chip away at the national gun registry position that a lot of Americans support. All in all, in the era of Trump, the Left will overreact and we’ll reap the dividends, but we can’t always bank on that. It’s time to end the debate on this issue. I mean it’s pretty much over. Time to deliver the knockout blow. Not with bluster, but with the facts because they’re on our side. Also, the Left can’t bank on more people living in cities. For starters, that’s not where the majority of the population lives; 50 of the largest cities house just 15 percent of the population. And there’s data that suggests Americans are staying put.