ICYMI: The GOP Has Emerged Out Of The Ashes In New England 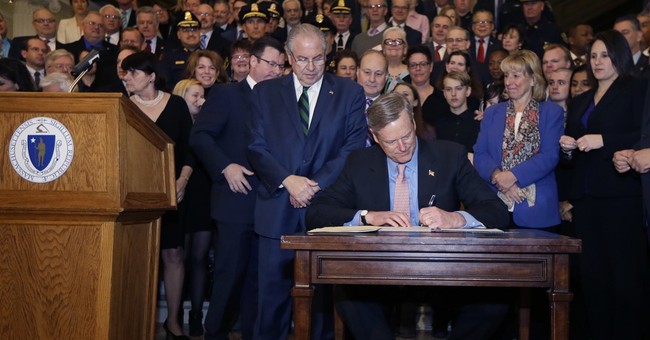 The Republican Party is the dominant political force in the country. We have control of Congress, two-thirds of the governorships, 69/99 state legislatures, and the White House. It’s a national party, whereas the Democrats are in their worst shape since the 1920s, reduced to their urban and coastal strongholds. It’s odd how in less than ten years, conservatism was supposedly on life support, only to roar back two years into Obama’s first term. Yes, the 2008 elections were brutal for Republicans. It was another walloping after the 2006 midterms. After the 2008 elections, the GOP’s more moderate wing that was set up in New England was virtually wiped out.

In 2017, Salena Zito, a writer for the New York Post and Washington Examiner, offered this friendly reminder about the Republican party in this region of the country: they’re back.

Last November, while most of the country was either cheering Donald Trump’s presidential win or making an appointment with their therapist about how to cope with the results, New Englanders in four out of the region’s six “blue” states — Vermont, New Hampshire, Massachusetts and Maine — woke up the next morning with four Republican governors.

Two of those governorships flipped from blue to red. It was a trend that the Northeast had not seen for a generation, but it received little national attention. (Connecticut and Rhode Island hold their governorship elections in 2018.)

If the reverse had happened, and four Democrats had won governorships in deep red states last year, the news would have been treated quite differently, said Brad Todd, a Washington, DC-based GOP strategist.

Vermont’s Scott won in a landslide, defeating his Democratic opponent by 9 percentage points while facing two political fronts that should have knocked him out of contention: the candidacy of Trump, who was so unpopular in Vermont, he got crushed there by 29 percentage points; and the popularity of Democratic presidential candidate Bernie Sanders, Vermont’s sitting US senator.

Interestingly, if you drove through Vermont last year, it was not uncommon to see yard signs for both Scott and Sanders in the same yards.

Meanwhile, on a trip to Cambridge, Mass., last month, I couldn’t find anyone who didn’t approve of their Republican Gov. Charlie Baker. From the leafy halls of Harvard to locals grabbing lunch at Charlie’s Kitchen on Eliot Street, everyone I talked to was a Democrat — and everyone gave him high marks as the state’s manager.

It’s not just anecdotal. Polling has consistently shown Baker is the most popular governor in the country.

Now, yes, the GOP is on top, but let’s not forget that the Democrats thought they were in for a permanent majority—a phrase I wish we could retire from politics because both parties have thought this and it’s blown up in their faces. Democrats thought Barack Obama—a two-term limited president—would usher in an electoral realignment. Wrong. Republicans thought 9/11 and national security would give them a permanent majority. Also, wrong. Things can change very quickly—that’s all.