Another Taxpayer Bill? Tom Price Also Took $500,000 Worth Of Military Jets For Travel 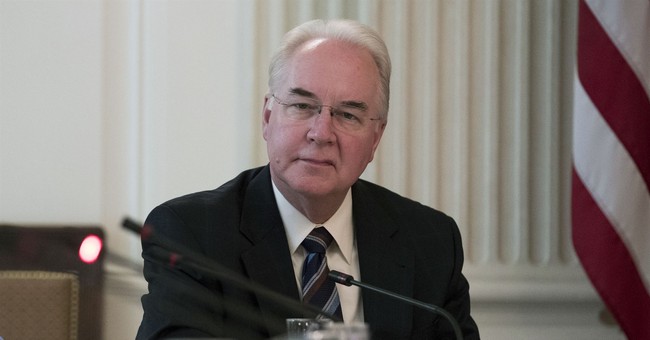 Well, it goes without saying, Health and Human Services Secretary Tom Price’s use of chartered flights is inexcusable. Guy had a brutal takedown of the HHS secretary’s flight use. In once case, Price booked a private flight for a 35-40 min trip from Dulles to Philadelphia at the cost of $25,000. This is a man who is a fiscal hawk, who has railed against wasteful government spending, and then stuck us with his travel tab. Now, Politico is reporting that he charted $500,000 worth of military flights with his wife. The White House approved the flights, but the optics of this whole thing are terrible. Price said he would reimburse the government for his portion of the travel (via Politico):

The White House approved the use of military aircraft for multi-national trips by Health and Human Services Secretary Tom Price to Africa and Europe this spring, and to Asia in the summer, at a cost of more than $500,000 to taxpayers.

The overseas trips bring the total cost to taxpayers of Price’s travels to more than $1 million since May, according to a POLITICO review.

Price pledged on Thursday to reimburse the government for the cost of his own seat on his domestic trips using private aircraft — reportedly around $52,000 — but that would not include the cost of the military flights.

Price’s wife, Betty, accompanied him on the military flights, while other members of the secretary’s delegation flew commercially to Europe.

HHS spokeswoman Charmaine Yoest said Price has reimbursed the agency for the cost of his wife’s travel abroad, but declined to say when he did so. Price has been under intense criticism since POLITICO revealed his extensive use of charter aircraft for domestic flights last week. His travel expenditures are subject to reviews by the HHS inspector general and the House Oversight Committee. Democratic and Republican senators have also demanded information about Price’s travel expenditures.

And it’s not just Price. Secretary of the Interior Ryan Zinke has now been roped into flightgate:

Interior Secretary Ryan Zinke chartered a flight from Las Vegas to near his home in Montana this summer aboard a plane owned by oil-and-gas executives, internal documents show.

The flight, along with private flights during a trip to the Virgin Islands, could propel Zinke into the growing debate over the costs of travel by Cabinet secretaries, some of whom have chosen expensive charter jets and military planes at high expense to taxpayers over the cheaper option of flying commercial.

In June, Zinke and his staffers took a four-hour flight from Las Vegas to Kalispell, Mont., aboard a private plane owned by the executives of a Wyoming oil-and-gas exploration firm, aviation and business records show.

The landing in Kalispell put Zinke a short drive from his home in Whitefish, Mont., where he spent the night, documents show.

The flight cost taxpayers $12,375, according to an Interior Department spokeswoman. Commercial airlines run daily flights between the two airports and charge as little as $300.

We have tax reform, immigration, and possibly another go at health care, though that latter would probably occur next year (if at all), we don't need this right now, folks. Get your act together.