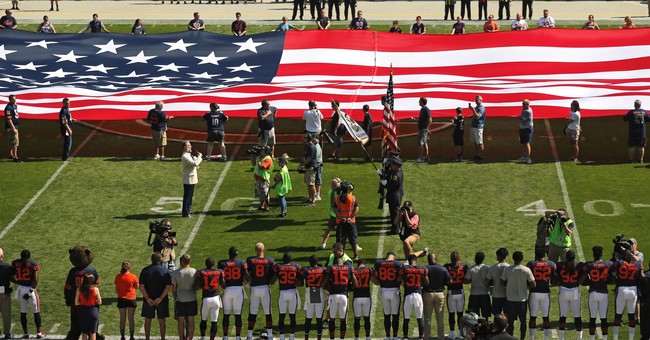 “Fans who attack players for protesting, (a right in which I fought to defend) but are simply not interested in understanding why, is the reason I am resigning.”

We can all mourn the politicization of football, but I think we’re at a point of no return. This is our reality now. Colin Kaepernick fired the first salvo and it’s spread like a cancer across the NFL. President Trump kicked it up a notch by bashing NFL players who take a knee during the national anthem, though polling shows the majority of Americans are with him in that criticism. It goes without saying: it’s viewed as spitting in the faces of our men and women in the military. Period. The Left, who supports these antics, have to explain what’s going on with ‘take a knee’ syndrome. No one cares about the explanations. With social media and their celebrity, these players could voice their opinions regarding race relations, community policing, or whatever. It probably would have received attention and debate. Instead, people saw these folks as trashing the flag. It’s a public relations nightmare for the league and another culture win for Trump.

Over at Baltimore, the Ravens’ national anthem singer Joey Odoms, who is also a member of the National Guard, decided to resign over protests surrounding the Star-Spangled Banner.

“The tone/actions of a large number of NFL fans in the midst of our country's cultural crisis have convinced me that I do not belong there,” said Odoms on Facebook:

I am resigning as Official National Anthem Singer of the Baltimore Ravens. The people I've had the pleasure of meeting at the Ravens organization have been nothing but nice to me, however the tone/actions of a large number of NFL fans in the midst of our country's cultural crisis, have convinced me that I do not belong there. Someone once told me to always "go where you're welcomed". This is not an emotional reaction to recent events, rather an ethical decision that part of me regrets but my core knows is the right choice.

Thank you so much for the opportunity to grow as a performer and for allowing me to live out a dream of sharing my gift with you.

The Ravens now need to find a new singer before Sunday’s game with the Pittsburgh Steelers.

Other singers have participated in the protests, like Megan Lindsey, who took a knee while singing the Star-Spangled Banner at the Titans-Seahawks game:

Megan Lindsey and her guitar player got down on one knee after performing the national anthem. The crowd cheered as she did so.

Players from both teams remained in their lockers rooms during the song in a joint protest.

Members of the Seahawks and Titans decided to sit out the national anthem in the wake of President Trump’s comments attacking NFL players who knelt during the anthem.

Both teams released statements announcing the decision and in support of their players.

The Ravens played the Jacksonville Jaguars at Wembley Stadium in the United Kingdom last Sunday, where both teams stood for “God Save The Queen,” but took a knee when our national anthem was played. You can explain how this isn’t about disrespecting the flag all you want, NFL players. Your fans don’t see it that way—and they’re very, very pissed off.