New England Patriots Fan: I Like What Trump Said, 'If You’re Not Going to Stand For This Country—You’re Fired' 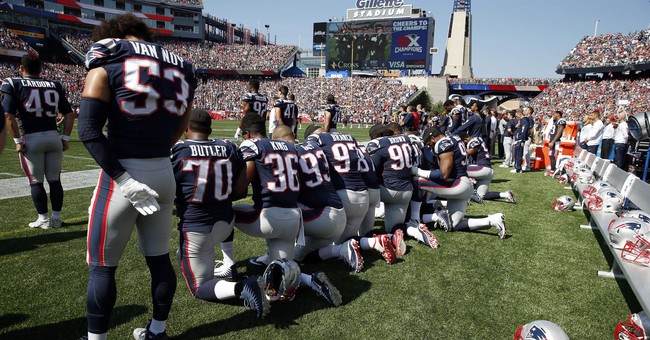 Seventy-two percent of Americans think that Colin Kaepernick’s national anthem antics are unpatriotic and the New England Patriots got a taste of that this weekend. On Sunday, before their game against the Houston Texans, New England fans booed their own team for taking a knee during the Star-Spangled Banner. It comes after Donald Trump went after NFL players who had done this in previous games. In the video below, you can hear some fans shouting, “stand up” (via IBT):

Before the Patriots took on the Houston Texans in Foxborough, Mass. Sunday, more than a half-dozen players took a knee during the national anthem performance, —  the first time a Patriots player had done so. A roaring chorus of boos echoed throughout the stadium coupled with chants of "stand up," the Boston Herald reported.

The team’s leader and quarterback Tom Brady did not kneel during the anthem, instead, he placed his hand on his chest while he locked arms with teammate Phillip Dorsett. The boos came after President Trump spoke in Alabama on Friday and blasted players who kneeled during the national anthem. The president doubled down on his disapproval in a tweet Saturday which suggested the NFL should fire players who protested during the national anthem.

Frank Vessella, a Patriots fan, said the whole spectacle was a disgrace.

“They should have stood,” he said while being interviewed by the Associated Press, “it’s disrespectful to the United States, to the men that served and fought for this country—that’s a disgrace. They should be standing,” he added.

Vessella supported Trump’s position on the matter as well.

“I like what the president said; if you’re not going to stand for this country—you’re fired.” He felt wholeheartedly that something should be done to the players who took a knee.