Leeching Into Baseball? Oakland As' Catcher Takes A Knee During National Anthem 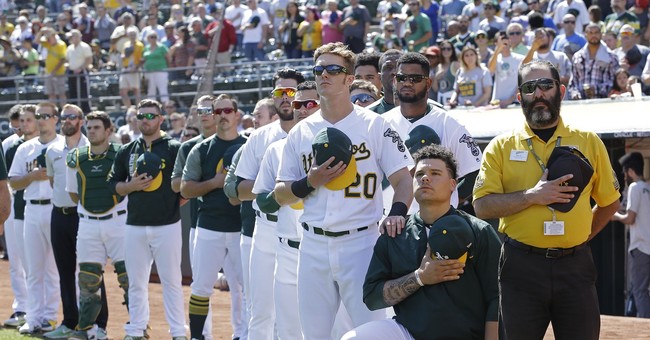 Colin Kaepernick set off the controversy. President Donald Trump took it to a new level, which resulted in a liberal meltdown over the weekend concerning NFL players who take a knee during the national anthem. It’s spread since then, venturing onto football fields and volleyball courts—at both the high school and collegiate level. Even professional women’s soccer got a taste of it. Until this weekend, Major League Baseball was free of this cancer until Bruce Maxwell, catcher for the Oakland Athletics, decided to take a knee (via HuffPost):

Bruce Maxwell, catcher for the Oakland Athletics, just became the first major league baseball player to take a knee during the national anthem in Saturday’s game against the Texas Rangers.

The team released a statement on Twitter shortly after.

“The Oakland A’s pride ourselves on being inclusive,” the statement read. “We respect and support all of our players’ constitutional rights and freedom of expression.”

The political statement came a day after the president criticized athletes who protest during sporting events.

“I get nasty DMs and everything, but that also shows what’s wrong with this country,” Maxwell said. “People think athletes should shut up and get their money and play their sport, but no matter how much money we make, no matter how many touchdowns we score, no many how many home runs we hit, it doesn’t mean we aren’t people. Our paychecks don’t silence us.”

The point of my kneeling was not to disrespect our military or our constitution or our country,” Maxwell said. “My hand was over my heart because I love this country and I have family members, including my father, who bled for this country, and who continue to serve. At the end of the day, this is the best country on the planet. I am and forever will be an American citizen and grateful to be here, but my kneeling is what’s getting the attention, and I’m kneeling for the people who don’t have a voice.

“This goes beyond the black and Hispanic communities because right now we have a racial divide that’s being practiced from the highest power we have in this country saying it’s basically OK to treat people differently. I’m kneeling for a cause but I’m in no way disrespecting my country or my flag.”

Should Maxwell be fined? No. I disagree that any player who takes a knee should be suspended or fired, but they’re going to have to deal with fans and the president kicking them in the teeth for these antics. The fans, especially, since 72 percent found Kaepernick’s Star-Spangled Banner protests to be unpatriotic. I’m going to guess it’s the same with MLB fans.