Pittsburgh Steelers: We're Going Stay In The Locker Room For The National Anthem 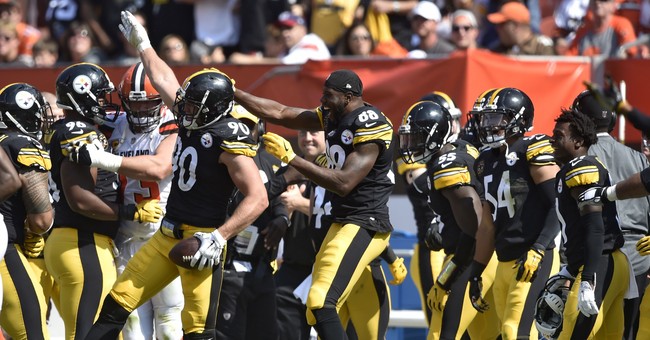 UPDATE: There was only one Steelers player to stand for the national anthem. Former Army Ranger Alejandro Villanueva (No. 78) stood by the tunnel with his hand over his heart.

No Steelers were on the sideline during the anthem.

LT Alejandro Villanueva, a veteran who served in the Army, stood near the tunnel. pic.twitter.com/JOviLUAtiF

President Trump has decided to take some swipes of the National Football League, specifically the players who take a knee during the Star-Spangled Banner. Most disapprove of such antics, viewing them as unpatriotic. Regardless, team after team slammed Trump’s remarks as divisive. In the United Kingdom, Jacksonville Jaguars Owner Shad Kahn had this to say and yes—NFL players stood for God Save The Queen, but took a knee for our national anthem at Wembley Stadium:

Roger Goodell of NFL just put out a statement trying to justify the total disrespect certain players show to our country.Tell them to stand!

How do you kneel for your own national anthem overseas and stand for the British anthem? Bad day for NFL business.

Jacksonville Jaguars owner Shad Khan calls it a privilege to stand arm-in-arm with players during the national anthem in London.

Khan stood between tight end Marcedes Lewis and linebacker Telvin Smith at Wembley Stadium and then released a statement to express his support for players. Coaches and other team personnel from both teams did the same before the game against the Ravens.

About two dozen players on both teams kneeled, something President Donald Trump has said owners should fire players for.

“It was a privilege to stand on the sidelines with the Jacksonville Jaguars today for the playing of the U.S. national anthem at Wembley Stadium,” Khan said. “I met with our team captains prior to the game to express my support for them, all NFL players and the league following the divisive and contentious remarks made by President Trump, and was honored to be arm in arm with them, their teammates and our coaches during our anthem.”

Mike Tomlin says the Steelers won't be participating in the National Anthem today. Instead they will stay in the locker room. #TakeAKnee pic.twitter.com/AAAle8zKQO

Trump vs NFL intensifies: Steelers to stay in locker room for national anthem in game vs Da Bears today

The social media reactions have been immense from other professional athletes as well, but the Pittsburgh Steelters have decided to withdraw themselves from the national anthem altogether. They’re just going to stay in the locker room. Steelers coach Mike Tomlin says he doesn’t want to play politics (via USA Today) [emphasis mine]:

The Pittsburgh Steelers won't be participating in the national anthem prior to Sunday's game against the Chicago Bears, coach Mike Tomlin told CBS Sports' Jamie Erdahl.

After President Trump repeatedly spoke out in the last three days on players' protests, Tomlin said he didn't want players to feel like they had to take a side in a public display.

"We're not going to play politics. We're football players, we're football coaches," Tomlin said. "We're not participating in the anthem today - not to be disrespectful to the anthem, but to remove ourselves from the circumstance.

The decision comes after President Trump repeatedly called for owners and the NFL to take action against players who choose not to stand during the national anthem.

Yeah, I don't think that's going to work, and this maneuver the Steelers are pulling may not be allowed:

Mike Tomlin says that Steelers will stay in locker room for National Anthem. This is not an option, according to league policy manuals pic.twitter.com/ViG9BDU6SA

Clarification: Teams are penalized 15 + loss of coin toss options for both halves if they aren't on the field 10 min prior to kickoff