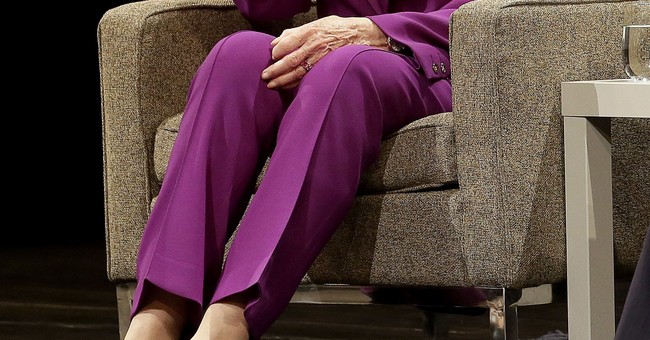 It’s a judicial nomination, albeit not a Supreme Court one. It’s one of many committee hearings, so I could see how this could have been cast on the backburner. Yet, it doesn’t make it any less odious in nature. Last week, Cortney wrote about how Sens. Dianne Feinstein (D-CA) and Dick Durbin (D-IL) decided to take a page from history, channeling their inner Know-Nothing by questioning Amy Coney Barrett’s religion, apparently a bit freaked out that a Catholic was in their presence. Barrett is Trump’s nominee for the 7th Circuit Court of Appeals nominee. Cortney noted some of the statements made by the two senators, namely Feinstein saying “the dogma lives loudly within you,” and Durbin’s question about whether Barrett is an “orthodox Catholic” (via Law Newz):

Sen. Dianne Feinstein brought up the article, titled “Catholic Judges in Capital Cases,” and told Barrett, “the dogma lives loudly within you.” Sen. Mazie Hirono said, “I think your article is very plain in your perspective about the role of religion for judges, and particularly with regard to Catholic judges.”

The article, which Barrett co-wrote nearly 20 years ago, deals with one particular subject, the death penalty. It expressly states early on thata number of religions are against it, but that the focus in the article would be on Catholicism because the authors happen to be Catholic. Barrett clarified during the hearing that the choice of writing from the perspective of Catholics had already been made by the professor she was working with. The article discusses how judges with such religious beliefs should address death penalty cases, and how they can recuse themselves if the law goes against their personal beliefs.

The article states, “Judges cannot-nor should they try to-align our legal system with the Church’s moral teaching whenever the two diverge.” Yet somehow, Barrett was treated as if she wants to turn the United States into a Catholic society.

I hope that reporters press @SenatorDurbin on why he thinks it is acceptable to question judicial nominees about their religious beliefs https://t.co/X5GMR9EzUr

They might as well have just straight up asked her if she will call the Pope direct on legal matters. Anti-Catholicism is one of America’s underwritten biases, and you have to wonder whether there would have been more of an outcry if Barrett had faced similar grilling from Democrats if she were a Muslim or a Jew. Who am I kidding? Of course, that would have been the case! The Wall Street Journal editorial board noted exactly what was going on with this hearing:

Sen. Dick Durbin jumped in to demand of Ms. Barrett: “Do you consider yourself an orthodox Catholic?” Does Mr. Durbin understand that he sounds like the Southern Baptist ministers in 1960 who thought Jack Kennedy shouldn’t be President because he’d take orders from the pope?

This questioning is part of a broader effort on the left to disqualify people with strong religious views from the public square. Ms. Feinstein’s smear about Ms. Barrett’s “dogma” dovetails with the left-wing Southern Poverty Law Center’s effort to label any outfit that doesn’t go along with its agenda a “hate group.”

As for judges imposing dogma over the law, it’s worth noting that not all dogmas are religious. Democratic interest groups are explicit in demanding that Democratic judicial nominees be committed to overturning Citizens United’s defense of free speech while brooking no modification in Roe v. Wade.

The Notre Dame law professor received some support from the university’s president, who aptly described the hearing as “chilling.” The U.S. Conference of Catholic Bishops also voiced their concerns over this possibly unconstitutional line of questioning. It’s quite clear that Democrats were trying to impose a religious test, which is illegal for federal offices.

If Democrats want to find ways to win again, it may not be the best time to impose religious tests and start bashing Catholics, who for some reason keep voting Democratic in healthy numbers. There were huge swings in 2012 and 2016, but this bigoted hearing and the whole notion about abortion being used as a religious test for candidate support among Democrats is aimed at one thing: telling people of faith, people are pro-life, and Catholics that they do not belong in the party. Overall, it’s a swipe at working people, who do not hold the same pro-abortion views as those from urban areas. As Salena Zito wrote in the Washington Examiner, bashing Catholics is a good way to lose the Rust Belt. At the same time, she notes that the rural drift to the GOP is mainly due to the fact that Democrats and liberals are just an insufferable bunch. The GOP has many voters, including their own, upset with their performance to deliver on key promises. They have to work on that because this whole ‘Democrats are worse’ tide is going to dissipate:

"Democrats used to debate the legal right to have one, and that was a point of view that was shared by most voters," said Michael Wear, a theologically conservative evangelical Christian and Democrat who served in Barack Obama's faith outreach office in the White House.

"I don't understand why, 14 months before a midterm election, why would you push 20 percent of voters who would love to support Democrats out the door? Better yet, why would you speak of pro-life Democrats as though they were some extraterrestrial who just landed on earth?" he said.

Wear cringes at Feinstein's anti-Catholic remarks and line of questioning, as well as Sen. Dick Durbin, who asked during the same confirmation hearing if Barrett was an ‘orthodox Catholic.'

"This is just wrong and it doesn't just hurt and target people of faith, it hurts good Democrat candidates like Bob Casey of Pennsylvania, or Joe Donnelly of Indiana who take their faith seriously.

"I know both men along with other Democrats running for office will be asked during the upcoming midterms to disavow Feinstein and Durbin's attitudes and line of questioning. It's a mark against them and the party to be put in this position."

Here in the Ohio Valley down-ballot Democrats have lost their seats in spades; on both the Pennsylvania and state sides, from state legislator to state senator to Congress and the presidency, the voters began peeling away from the left since Al Gore in 2000.

A nationwide exit polling data shows Trump won Catholics by 52 percent to 45 percent over Hillary Clinton. A huge swing from the past two elections for Barack Obama when Catholics voted for him by margins of 9 points in 2008 and 2 points in 2012.

Why is that important? Well, in states like Michigan, Ohio, Pennsylvania, and all through the Midwest ,the Catholic vote is a very important voting bloc no matter what you are running for — and that includes running to retake the majority in 2018.

President Obama and other Democrats have made statements about religious liberty, and that it applies to all Americans…except Christians, and especially Catholics. Progressivism after 100 years is a rather nasty, nasty creature. Mark this down, as any conservative should, as another reason to be proud not to be a liberal or a Democrat.