Trump Administration To DACA Recipients: You Might Want To Pack Your Bags 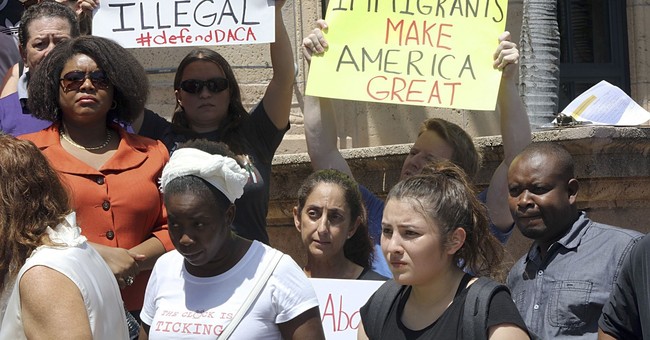 The Trump White House issued the final order: the Deferred Action for Childhood Arrivals program that began under the Obama administration is finished. The Department of Homeland Security has already begun winding down the program. There will be a six-month enforcement delay, which should spur Congress to act on finding a constitutionally sound remedy to this issue. DACA was created by executive action under Obama as a stopgap, which allows illegal aliens who came here as minors to be shielded from deportation if they meet the criteria for the program. Once granted, they could obtain work or study permits. Some thought this was a necessary measure, while others felt it was an overreach, a gross circumvention of Congress to enact a constitutionally questionable immigration overhaul. Tuesday afternoon, Press Secretary Sarah Huckabee Sanders said that despite the reports, DACA recipients are not being targeted for deportation (via TPM):

“DACA recipients, whose average age is in their 20s, were not an enforcement priority before and they certainly won’t become a priority now,” Sanders said at a press briefing Tuesday. “The priorities remain the same: criminals, security threats, and those who repeatedly violate our immigration laws. The main effect of today’s announcement is that work permits and other government benefits are being gradually phased out.”

Yet, a memo obtained by ABC News shows the administration pretty much telling DACA recipients, or DREAMers, that they should pack their bags (via The Hill) [Emphasis mine]:

The Trump administration is advising beneficiaries of the Deferred Action for Childhood Arrivals (DACA) program to "prepare for and arrange their departure from the United States," ABC News reported Tuesday.

Talking points distributed to GOP lawmakers and obtained by ABC News say that DACA recipients should use their remaining time in the U.S. to get their affairs in order, after President Trump rescinded the program Tuesday.

"The Department of Homeland Security urges DACA recipients to use the time remaining on their work authorizations to prepare for and arrange their departure from the United States – including proactively seeking travel documentation – or to apply for other immigration benefits for which they may be eligible," the document says.

Multiple sources confirmed the authenticity of the talking points to ABC News.

As for what to do with the DREAMers in general, the vast majority of voters, including Trump voters, do not want deportation en masse for them (via Politico) [emphasis mine]:

Voters overwhelmingly support allowing undocumented immigrants brought to the U.S. as children to stay in the country, according to a new POLITICO/Morning Consult poll, placing President Donald Trump’s decision to wind down the controversial Deferred Action for Childhood Arrivals program at odds with public opinion.

Support for allowing these immigrants to remain in the U.S. spans across party lines: 84 percent of Democrats, 74 percent of independents and 69 percent of Republicans think they should stay.

“Given the deeply polarizing nature of immigration issues, the broad support for allowing Dreamers to stay in the United States is notable,” said Morning Consult co-founder and Chief Research Officer Kyle Dropp. “Just 24 percent of Republicans, 12 percent of independents and 8 percent of Democrats say that Dreamers should be deported.”

The same holds true for Trump’s electoral base. Two-thirds of self-identified Trump voters think the Dreamers should stay; only 26 percent think they should be deported.

Let’s see what Congress whips up. Sen. Tom Cotton (R-AR) is for passing his RAISE Act, which sets language and skills requirements for green card applicants, while offering legal status to DACA recipients. It’s a wait and see game now.

A Group Of Parents Sent Their Kids' Face Masks to A Lab for Analysis. Here's What They Found
Townhall
Florida man faces felony charges after doing a burnout with his pickup on a Pride-painted intersection
Twitchy
Lauren Boebert Had the Perfect Message for Antifa Harassing Conservatives in Denver
Redstate
Portland Mayor Scrambles as Fallout From Mass Resignations of Portland Riot Squad Begins
PJ Media