Vox's Anti-Antifa Post Finally Admitted This About the Tea Party 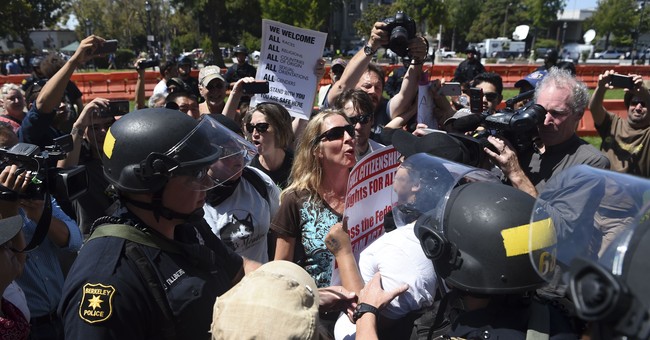 OK—so we know how the Antifa (anti-fascist) movement is lawless and violent (and they've been classified as engaging in domestic terrorism). They think they’re doing the world a great service by beating up neo-Nazis, but it’s really people with whom they have political disagreements; even journalists are assaulted by this clown show. This group rumbles with their right wing counterparts in the white nationalists. We saw that in Charlottesville, Virginia. In Berkeley, California, it was just beating up ordinary Americans who supported Trump and free speech. It’s been ugly. And no they’re not the good guys. Antifa and the white nationalists of America represent the worst of this country. Luckily, The Washington Post and Vox, two prominent left-leaning outlets, are seeing how violent this group is with regard to political demonstrations. CNN noted this as well, though they bowed to Antifa's pressure when they called them violent in their headline. The article itself highlights the extremism within this movement, however. The Department of Homeland Security labeled their activities as acts of domestic terrorism last year. So, let’s go to the Vox piece, which is good except for one thing [emphasis mine]:

The argument for antifa activists is that the current crop of right-wing protesters — which are partly but not entirely made up of neo-Nazis, KKK members, and other white supremacists and nationalists — are so extreme that they must be stopped swiftly and even violently. Antifa supporters worry that if these groups’ views aren’t completely robbed of any kind of platform, they could gain legitimacy — and take advantage of democratic ideals like free speech to, ironically, promote their undemocratic messages. Violence is one way to get them off the stage.

What this view misses is the backlash that may come from political violence: that such violence can reinforce right-wing views about the left. As Michael Kazin, a history professor at Georgetown University and editor of Dissent magazine, told me earlier this year, “[N]on-leftists often see [the left] as a disruptive, lawless force. Violence tends to confirm that view.”

Some of this backlash is already happening. Consider how Trump himself reacted to Charlottesville. He drew a lot of (justified) criticism for arguing that “both sides” had been behind the violence in Charlottesville, instead of pinning the blame on the white supremacists who swarmed the Virginia city and caused mayhem.

But one reason Trump could draw up this false equivalence in the first place is because antifa protesters have been carrying out violence against right-wing groups for months now. As Peter Beinart reported in the Atlantic, antifa activists have violently protested right-wing speakers like Milo Yiannopoulos and conservative political scientist Charles Murray. In the Yiannopoulos protests in particular, antifa activists even threw explosive Molotov cocktails and other objects at police.

Just this month, activists in Boston overwhelmed a right-wing rally — to the point the rally ended early — through almost entirely peaceful demonstrations.

Earlier this year, the Women’s Marches emboldened anti-Trump activists. Protests against the travel ban and Republican health care bill surely contributed to the defeats — or at least eventual watering down in the case of the travel ban — of these policies.

Over the past few years, peaceful Tea Party demonstrations empowered a new wave of conservatives. Occupy Wall Street protests brought the language of the “99 percent versus the 1 percent” to the political mainstream, arguably fueling Bernie Sanders’s surprisingly strong 2016 campaign. And in the 1950s and ’60s, Martin Luther King Jr. peacefully fostered a civil rights revolution — and he’s now revered by both the right and left for it.

First of all, let’s discuss that Vox said that Tea Party protesters were peaceful. Maybe that’s because wanting fewer regulations, taxes, and reducing the size of government is not a crazy, right wing terrorist agenda. That was a nice comment to add concerning how peaceful protests have worked out so much better concerning political activism than beating people up. The Occupy protests brought vandalism and scores of crimes to the various encampments, so let’s not cite them as a stellar example, albeit Vox did do a nice job showing how Antifa’s violence is going to hurt their agenda. Not necessarily complaining about that for this bunch of progressive thugs. I would say that the only thing Vox omitted from their criticism of Antifa is not that it plays into President Trump’s hands concerning political violence being committed by the far left, or that it’s not effective activism—all of that is true. It’s that political violence is, well, absolutely wrong. Vox does say that it’s wrong, but through the lens of results and optics. We don’t beat up people because they hold differing political opinions. To commit acts of violence to further a political goal and influence the wider audience, which by the way is textbook terrorism, is wrong. Yes, nonviolent protests have been more effective. Yes, left wing political violence only emboldens its opposition and makes them seem like crazy people to the sensible center of America, but perhaps the No. 1 reason why Antifa is doing it wrong is because when they use violence to stop their opponents, they’re no better than neo-Nazis. You know, the whole violence is wrong thing we were taught when we were young. Maybe that should be the No. 1 reason Antifa is wrong.

It's remarkable in retrospect how much people freaked out about the Tea Party, which had no organized violence to speak of.

Share this on Facebook
Tweet
Biden's UN Ambassador Defends Repeating Anti-American, Chinese Propaganda
Katie Pavlich
Maxine Waters Calls For Riots to Continue: We Must Stay in the Streets
Katie Pavlich
What We Know about the FedEx Shooter in Indianapolis...And Now This Tragedy Might Have Been Avoided
Matt Vespa
Border Patrol Catches a Previously Deported Convicted Murderer
Katie Pavlich
Fauci Was Subjected to a Brutal Tongue Lashing by a GOP Rep When He Couldn't Answer a Simple Question
Matt Vespa
Bill Maher Rips Media's COVID 'Panic Porn': 'How Did Your Audience Wind Up Believing Such A Bunch Of Crap?'
Scott Morefield
CARTOONS | Steve Breen
View Cartoon
Most Popular