What The Hell Happened? Why Did Houston Officials Tell Residents To Hunker Down Instead Of Evacuate 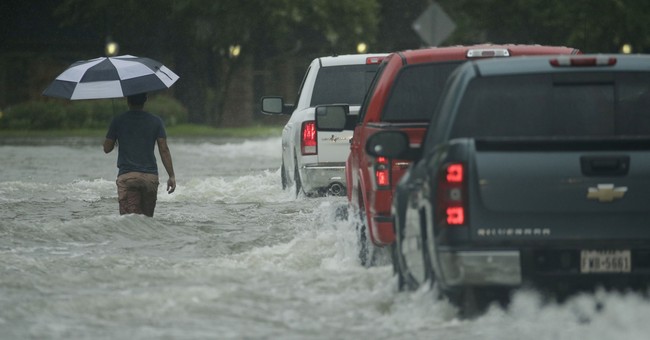 Hurricane Harvey is slamming the Texas coast. Houston-area is being absolutely pummeled, with 419 billion gallons of water being dumped on the city. Flooding has become a major issue. Over 1,000 people had to be rescued by first responders and good Samaritans. At least five people have died as a result of the storm. Texas Gov. Greg Abbott issued a state of disaster for 30 Texas counties that will be impacted by Harvey. President Trump is expected to visit the area by Tuesday. So, if Houston was going be thrashed by the storm, why did city officials tell residents to dig in rather than evacuate? Gov. Abbott issued an evacuation order. It seems to make sense, though there was a legitimate concern about millions of people getting trapped in their cars as water level rose to deadly levels (via ABC 13):

BREAKING: Nat'l Weather Service issues dire warning: "This event is unprecedented and all impacts are unknown beyond anything experienced." pic.twitter.com/TVZui6py81

Houston officials are showing signs of frustration after Texas Gov. Greg Abbott urged anyone who can to evacuate before Hurricane Harvey arrives.

Houston Mayor Sylvester Turner on Friday tweeted "please think twice before trying to leave Houston en masse." His plea came shortly after Abbott held a news conference urging Gulf Coast residents to pack up and leave, whether or not their cities are under evacuation orders.

No evacuation orders have been issued for Houston. The mixed signals between the Texas governor and local officials are emerging just hours before Harvey is expected to make landfall as a Category 3 storm.

Abbott has repeatedly suggested since Thursday that not enough people are evacuating. But state officials also say they have no count on how many people have actually left their homes.

Well, the city is now facing a massive evacuation crisis, and the mayor of Houston, Sylvester Turner, is now left defending his decision to not issue such an order as Harvey descended onto the city (via CNN):

"You literally cannot put 6.5 million people on the road," Turner said in a press conference. "If you think the situation right now is bad, you give an order to evacuate, you are creating a nightmare."

But many in Houston were already living in a nightmare. They woke up to find they were trapped inside their flooded homes and unable to receive aid from first responders, who were inundated with more than 2,000 calls for help, according to Turner.

"You issue an evacuation order and put everyone on the highway," Turner said, "you are really asking for a major calamity."

More than 1,000 people had to be rescued overnight while the storm dumped anywhere from 15 to 30 inches of rain across southeast Texas. The heavy rain, coupled with the overflowing of Houston's bayous, meant water levels in some areas could reach 50 inches, according to the National Weather Service.

On Sunday, CNN meteorologist Chad Myers agreed with officials' decision to not issue an evacuation order.

"He was right when he said, 'I don't want 6.5 million people on flooded roadways and dying in their cars,'" Myers said.

"You can't move a city like Houston with six hours' notice," he added. "But people shouldn't need an evacuation order if they live in a flood plain and they see 25 inches of rain coming.

That’s a debate for another time, if folks even want to have it. Right now, it’s about saving lives.