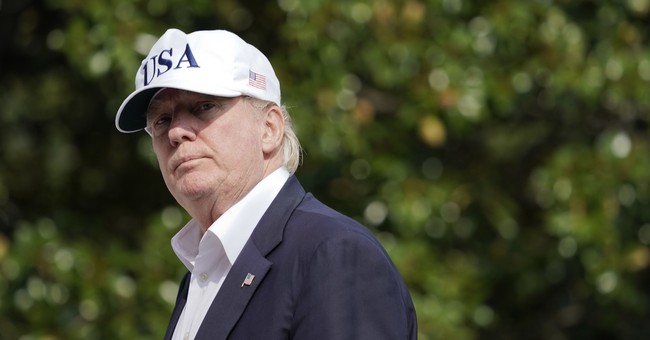 So, while the hard core Left lusts for the impeachment of President Trump, Vanity Fair’s T.A. Frank is hitting the brakes on that venture. First of all, it won’t change anything; the GOP would still control the White House. Vice President Mike Pence would then become the next target, though that would only lead to a Paul Ryan presidency. Of course, none of this will happen. Just reminding liberals that the line of succession is solidly Republican. Franks also makes the point that Trump resigning could actually make his movement stronger, whereas nothing good will come from impeachment proceedings that will only deepen partisan divides to dangerous levels. As he puts it, removing Trump could make him one of the most, if not the most, powerful ex-president in this country’s history. So, don’t impeach Trump, but maybe making resignation more appealing is the answer:

One of the most memorable reflections on the crushing of China’s Tiananmen Square protests in 1989 came several years later from a railway worker named Han Dongfang. The democracy movement, he told interviewers several years later, had been like a piece of unripe fruit, bitter and green, that people had eaten despite the certainty of digestive agony. “So should they have eaten the fruit?” Han asked. “You can say they shouldn’t have, but they were hungry. And if you say that they should have, what they ate was still green, inedible.”

For millions of Americans, Donald Trump was like that fruit. Nothing else seemed edible, and they were desperately hungry, so they chose to swallow it.

All signs are that this was a major turning point [speaking about events post-Charlottesville]. It’s not that Trump supporters were scared away. It’s that Trump has now become such an icon of America’s cold civil war that he politicizes everything he touches, whether he wants to or not. Even George W. Bush, hated as he was by liberals, could play the ceremonial and non-partisan role of head of state at the customary times: concerts, meetings with Olympic athletes, medal bestowals, and so forth. With Trump, the role of head of state threatens to be swallowed up entirely by the role of partisan and culture warrior. Already, Trump has felt obliged to skip the Kennedy Center Honors, because several of the artists vowed to boycott the White House reception. The artists made the first move, but it’s hard to blame them. Trump makes it very hard to separate the office from the man.

It feels dangerous. Trump has used up his second chances, and righting the course seems close to impossible now. That doesn’t mean he should be removed from office. Nothing good can come of impeachment, which would deepen partisan divisions and hurt the country, feeding into a narrative of deep-state coups. Democrats also want to ask themselves if increased suspicion of government would favor them going forward. But a lot of good could come from Trump’s resignation. He’d probably become the most powerful ex-president ever, with his deplorables looking to him for thoughts on every move made by President Mike Pence. He might enjoy himself more, since his political skills, like those of Bannon, run to insurrection rather than management. Oddly enough, with Trump no longer responsible for executing on what he advocates, Trumpism might also have a better shot. Who knows? More important, the country would be less on edge, less on the brink, with divisions less likely to flare up into flat-out war. That doesn’t mean anyone has to give up on trying to get to Las Vegas, if that’s where people want to go. But it does mean getting to work on finding a different driver.

Well, I’m not so sure about the choking on the unripen fruit part. Sixty percent of Trump supporters said, more or less, that they would never abandon him; that figure is even more intense with female Trump voters. On personality, Trump does poorly, but on the issues, he’s polling much more strongly with voters. This is a very nuanced presidency. He’s getting more aggressive on immigration, he’s created over 1 million jobs in six months, consumer and small business confidence are at record highs, we have a solid conservative jurist on the Supreme Court. Tax reform and health care are the two big enchilada items that he has to come through on, but things have stalled due to Democratic political games. That’s not an excuse to walk away from the whole agenda, however. While the strong poll numbers on Trump delivering on his campaign promises have dipped, it’s probably do to the second trip up over Obamacare, where John McCain decided to fly all the way from Arizona to screw his own party. Health care is an issue the GOP has to follow through on, but for now—the action item of the day is tax reform.

Will Trump run for a second term? It remains to be seen; I think he will. But resignation; there’s no chance.