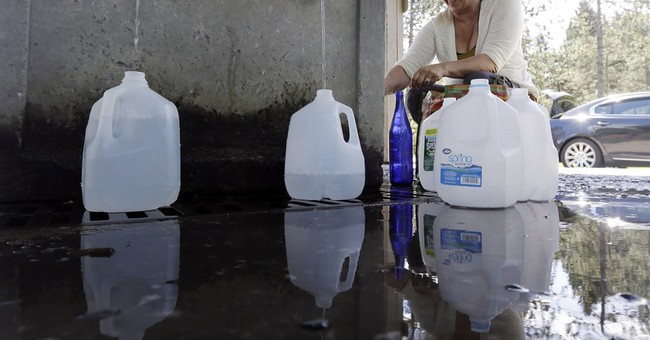 So, in the land of progressivism that is the state of California, the legislature could be imposing a tax on drinking water aimed at repairing the state’s public water works. It will be 95¢ a month that is projected to generate $2 billion in revenue over the next 15 years. Surprisingly environmentalists and farmers have forged an alliance on this issue. The farmers want contaminated water cleaned due to the runoff from their farms. Farms will face fees that will total $30 million in revenue annually to help with the needed repairs. This is still going to be a fight in the state legislature, however. And the water companies don’t seem too keen on becoming the state’s tax collector on this issue. Kate Murphy of The Mercury News has all the details about this new measure:

Senate Bill 623, backed by a strange-bedfellows coalition of the agricultural lobby and environmental groups but opposed by water districts, would generate $2 billion over the next 15 years to clean up contaminated groundwater and improve faulty water systems and wells. The problem is most pervasive in rural areas with agricultural runoff.

SB 623 has been moving through the Legislature for months, but was amended Monday to include the tax on water for both homes and businesses. It also imposes fees on farms and dairies, roughly $30 million annually, to address some of the contamination caused by fertilizers and other chemicals. Because it includes new taxes, the proposal will need a two-thirds vote in each house to pass, which supporters concede will be a battle.

…water agencies say taxing drinking water sets a dangerous precedent and that the bill would turn them into state tax collectors. “Water is essential to life. Should we tax drinking water? We don’t think so,” said Cindy Tuck, a spokeswoman for the Association of California Water Agencies.

Sue Stephenson, a spokeswoman for the Dublin San Ramon Services District, said she supported the intent of the proposal — potable drinking water for all — but argued that lawmakers should use the money in existing coffers.

“The whole purpose of the general fund is to help take care of disadvantaged communities,” she said. “There’s no reason that they could not also fund communities that need access to drinking water.”

What is it? SB 623, by Sen. Bill Monning, D-Monterey, would generate $2 billion over 15 years for a Safe and Affordable Drinking Water Fund, which would provide emergency water and longer-term system fixes for hundreds of communities whose tap water doesn’t meet safe drinking-water standards.

Where would the money come from? The proposal would generate roughly $110 million per year through a 95-cent monthly fee on home water bills as well as taxes on businesses of up to $10 per month. Another $30 million would come from higher fees on agricultural and dairy businesses, industries whose chemicals contribute to the problem of contaminated groundwater.

Who’s for it? Who’s against it? The bill is backed by the agriculture and dairy lobbies, as well as by a long list of environmental, social justice and civic groups — an unusual combo. Water districts are against the bill, saying that taxing water users creates a bad precedent and that collecting the money would be burdensome.

So, what isn’t taxed in California?