NYT: McConnell Privately Questions Whether Trump Can Save His Presidency; UPDATE: McConnell Responds 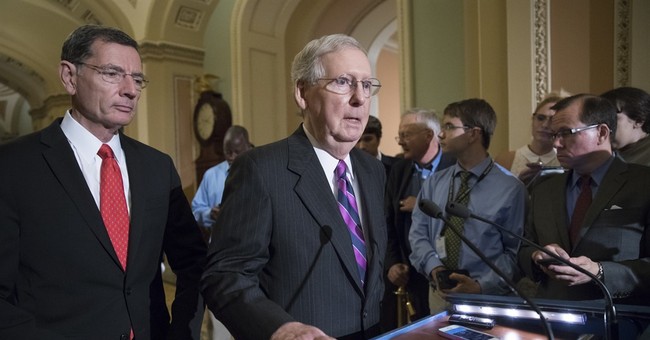 UPDATE: McConnell has issued a formal statement concerning the family feud allegations in The New York Times, saying that both his team and the White House are working on ways to move forward on the “shared goals” of infrastructure, job creation, and tax reform. They’re “committed to advancing our shared agenda and anyone who suggests otherwise is clearly not part of the conversation.”

Well, it seems President Donald Trump is having a war of words with Senate Majority Leader Mitch McConnell (R-KY). The New York Times reported last night that the delicate dance both men played has turned into WWE SummerSlam, with the president frustrated with the upper chamber’s inability to seal the deal on health care. On the other hand, McConnell is saying quietly that he doesn’t know if Trump can save his presidency. It was discussed prominently on CNN last night before the president’s rally in Phoenix:

The rupture between Mr. Trump and Mr. McConnell comes at a highly perilous moment for Republicans, who face a number of urgent deadlines when they return to Washington next month. Congress must approve new spending measures and raise the statutory limit on government borrowing within weeks of reconvening, and Republicans are hoping to push through an elaborate rewrite of the federal tax code. There is scant room for legislative error on any front.

A protracted government shutdown or a default on sovereign debt could be disastrous — for the economy and for the party that controls the White House and both chambers of Congress.

In a series of tweets this month, Mr. Trump criticized Mr. McConnell publicly, and berated him in a phone call that quickly devolved into a profane shouting match.

During the call, which Mr. Trump initiated on Aug. 9 from his New Jersey golf club, the president accused Mr. McConnell of bungling the health care issue. He was even more animated about what he intimated was the Senate leader’s refusal to protect him from investigations of Russian interference in the 2016 election, according to Republicans briefed on the conversation.

Mr. McConnell has fumed over Mr. Trump’s regular threats against fellow Republicans and criticism of Senate rules, and questioned Mr. Trump’s understanding of the presidency in a public speech. Mr. McConnell has made sharper comments in private, describing Mr. Trump as entirely unwilling to learn the basics of governing.

In offhand remarks, Mr. McConnell has expressed a sense of bewilderment about where Mr. Trump’s presidency may be headed, and has mused about whether Mr. Trump will be in a position to lead the Republican Party into next year’s elections and beyond, according to people who have spoken to him directly.

Both parties would not comment on the Times’ piece, but some in the news media continue to underestimate this man. This must be the 900th time we’ve either insinuated or suggested that Trump cannot lead the GOP, and that his presidency is in danger. Prior to that, it was whether his 2016 campaign was finished and whether he could win in the general. From politics to business, when the chips are down, Trump does his best. No doubt this is some tricky political navigating between Trump and McConnell. The latter has tried to confirm his appointments as expeditiously as possible, despite unprecedented Democratic obstruction. While rules and regulations have been rolled back and Veterans Affairs reform was signed into law, Judge Neil Gorsuch being placed on the Supreme Court remains the single greatest achievement of his presidency. Trump still needs to get health care and tax reform done. The recent health care trip up saw the Kentucky senator's approval rating to sink. As Katie noted, Trump's approval rating is solid in the Bluegrass State. For McConnell, not so much.