Trump Supporters On Bannon’s Exit: He Was Becoming An Obstacle Anyway 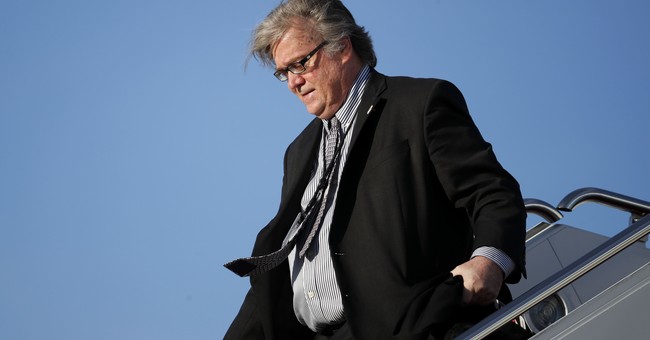 On Friday, White House Chief Strategist Steve Bannon was shown the exit. Supposedly he resigned two weeks prior, but the Charlottesville incident pushed back its announcement. That’s one narrative. The other is that he was straight up fired, which is what Axios’ Jonathan Swan reported. So, will there be major blowback from Trump’s supporters? Well, no—not really. Reuters reported that many supporters of the president found Bannon to be, a distraction, an obstacle, and rather inconsequential as his role in the Trump White House. Many said they’re confident Trump was navigate the waters without him:

"Bannon was becoming too big of a story and taking the spotlight from President Trump," Bob Janda, a 67-year-old small business owner, said in a bar in Chicago. "When that happens, your days are numbered. I think Trump will be fine."

At the same bar, Frank Cardone, 67, pointed out that Bannon had a brief tenure in Trump's inner circle, having joined the Republican businessman's presidential campaign as its chief executive less than three months before the Nov. 8 election.

"Bannon wasn't with Trump for too long so it's no big loss," said Cardone, a retired electrician.

"All these shakeups mean is that Trump is doing his job," Liz Lingafelter, a 60-year-old nurse, said in Fort Lauderdale. "He's a businessman and is doing what's best for the organization."

That view was echoed by Rick Weatherly, a 61-year-old Denver maintenance technician. "I voted for Trump, not Bannon," he said.

Bannon has rejoined Breitbart News since his departure, vowing to wage war against Trump’s enemies.