Vulnerable: Democratic Senator Makes An Admission About Obamacare (And Liberals Won't Like It) 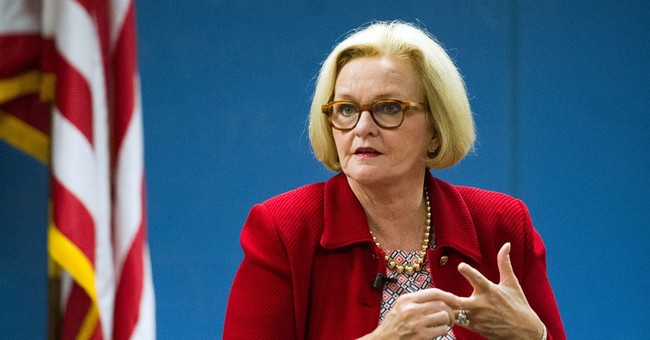 Sen. Claire McCaskill (D-MO) is one of the 2018 cycle’s most vulnerable Democrats. Missouri broke 56/37 for Trump over Hillary Clinton. The state is also bracing for quite the premium spike for its Obamacare plans, around 20-35 percent. So, what does McCaskill say about that? Well, only that President Obama’s health care overhaul was a mistake:

We made a mistake, the Democrats did, that we had hearings, which the Republicans didn’t. We had a bunch of hearings. We had Republican amendments added to the bill, but still we made a greater mistake because when we took it to the floor for a vote we did it with just Democratic votes.

On the issue of health care, McCaskill has been all over the place. She was against single-payer health care, which is becoming the new Democratic litmus test for support, along with abortion. Now, she’s totally for imposing $32 trillion in tax hikes to make single-payer happen for America:

I’m going to disappoint a lot of you, this is kind of how I roll a lot of you want me to say yes, and I would say if a single-payer came up to a vote right now I would not vote for it and here’s why. We have a huge debt. And we are looking down the barrel of a demographic bubble in Medicare as it is. My generation, there’s a bunch of us, I’m 63, I’ll be on Medicare in a couple of years. It’s already going to be a struggle for our country to keep up with the health care costs of the baby boom generation and so going to a single-payer system right now I don’t think is realistic and I don’t think it would be good for our debt. I think there are some steps that we would have to take for that to ever be a possibility. One is we are going to have to figure out the debt because with every rise of interest rate points it’s, you have no idea how hard it’s going to be for our government to function for the things you take for granted to actually come to pass if the interest rates go up four or five points. Because the interest on the debt will swallow things that you care about very much. So now having said that there are some things I would support down that path. For example, if the republicans, and I won’t go in to trump care right now or Obamacare right now because every town hall I’ve gotten a question on it so I’ll wait for that question, but in the single-payer space let’s say that there is a county in Missouri that has only one insurance company on the exchange. I want everybody to have a choice that needs to buy someplace that doesn’t get insurance at work and is not on Medicare or VA benefits or Medicaid and so if somebody doesn’t have a choice I would like to see a plan where they could buy in to either Medicaid or Medicare to provide a choice to them in those counties where there’s only one company on the exchange. I think that would be a great idea but that would require not higher taxes but that would require premium payments by the end of individuals who wanted to do that.

And if we can get those health care costs down through this comparison shopping. And if we can figure out a way to make sure that comparison-shopping doesn’t go away with a single-payer system, that we don’t lose the value of competition, then I think we could consider it. In the meantime, what I think that we should do is put what is a quasi-public option on the exchanges. People between the ages of 55 and 65 are the people that need health insurance the most, and in the Republican bills are going to pay the most.

And now Obamacare was a mistake. Maybe McCaskill is feeling the pressure concerning running for re-election in a state where Trump’s approval rating hovers around 50 percent.