ANTIFA on Assaulting Local CBS Reporter At Richmond Rally: He Was Out Of Line 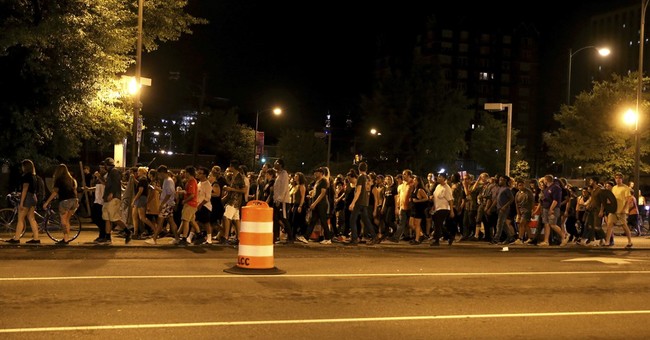 A day after the horrific violence in Charlottesville, Virginia, which left one person dead when a white nationalist drove his car through a group of counter demonstrators, a rally against white supremacy was held in Richmond. A local CBS reporter was sent to the hospital when an Antifa protester struck him in the head with an object (via WTVR):

Our @CBS6 photojournalist assaulted in the head while shooting protests in Richmond. In the hospital getting stitches. Stop the VIOLENCE! pic.twitter.com/xGEWu0SWr4

The journalist, who was not on the clock but was recording video for the newscast on his phone, recorded video of a large crowd of Monument Avenue protesters passing by The Camel, a live music venue, on West Broad Street.

“I can film whatever I want,” the CBS 6 staffer replied in the video. "Get out of my face."

The employee said protesters then put the flags in his face to block his camera view and intimidate him.

"That’s when then I extended my arm above the flags to try to get a better shot of the protest," he said. "One member of the group hit the phone out of my hand and my natural reaction was to push them out of my personal space. Immediately following I was hit in the back of the head with a some type of blunt object."

Police officers responded and the journalist was transported via ambulance to the hospital, where he received four staples in his scalp. He was later released from the hospital.

"This is not a peaceful protest," he wrote.

At the time, it was unknown if the person who assaulted the reporter was Antifa. Now, we do know —and they posted a recount of the events on their FB page. Of course, it was absurd. They claim he was acting like a drunken person, giving the finger with both hands to the crowd. This is a lie. You can see it on the video footage. The best part is that when they say you can hit someone because you feel scared, or something. That’s still assault, children:

This man ran out of the The Camel as the funeral March proceeded by. He was not working at the time so we can only assume he was drinking and made one bad choice after the next.

He didn't identify himself as press nor was he wearing anything that identified him as such.

This man ran at a crowd that was holding space for our murdered comrade with just his iPhone.

Due to the intensity and context of this time people are very scared of white men running full speed at them with iPhones as this is the exact behavior of a white supremacist trying to out identity of people of color and anti fascists in order to invoke fear.

Additionally, they also use press footage constantly to do this.

When this man ran up he was told people did not want to be filmed. He proceeded to film anyways. He was then told AGAIN that he was not to film people's faces. He proceeded anyways. He intentionally ignored the denial of consent, still without identifying himself (though we still wouldn't care), which was a threat to safety and should be considered in a context of perpetuating rape culture. Denial of consent by the media is still a denial of consent and is disgusting and parasitic behavior.

At this point there were folks that felt they were in extreme danger as no one knew who this man was or what his intentions were. He was now considered combative, aggressive and advancing with violence.

Then he got hit. Once. We aren't sure with what or by who but he did and it was all due to his own ridiculous, likely drunk, behavior.

This is what happens when you make people feel scared and purposefully incite anger.

Virginia is a single-party consent state. The reporter was also on a public property. Guy wrote a post earlier today where CNN's Jake Tapper reminded us that Antifa has assaulted reporters.