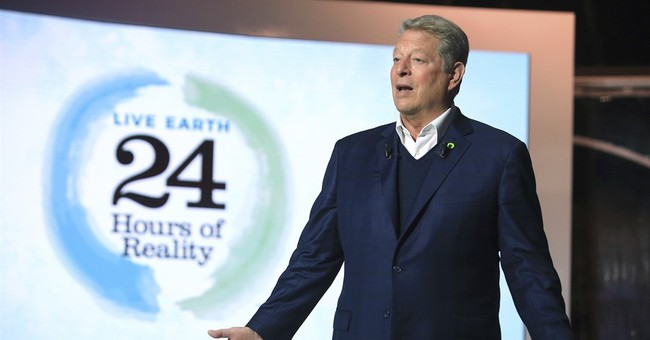 Former Vice President Al Gore has some advice for Donald Trump: he should resign the presidency. Now, it’s unclear whether it’s because of his waffled response to the violence that broke out between white nationalists and far left protesters in Charlottesville, Virginia last weekend. Gore said these remarks over a video about fighting climate change, so if this was over the president’s decision to remove the U.S. from the Paris Climate Agreement, that’s just cute. Gore goes on to say how global warming is the most serious crisis we face. He did the video as part of a push for his new movie:  An Inconvenient Sequel: A Truth To Power (via The Hill):

Former Vice President Al Gore said in an interview published Thursday that if he could give President Trump one piece of advice, it would be to resign.

Gore was asked the question during an interview with the website LADbible.

The 2000 presidential contender and environmental activist is promoting his new documentary "An Inconvenient Sequel: Truth to Power," which documents Gore's trips around the world to teach advocates and influence climate change policy.

"The large carbon polluters have put more than a billion dollars into an effort to try to deceive people into people thinking its not real," Gore told LADbible.

"When enough young people put the pressure on and do it passionately, than the laws begin to change," he said commenting on the future of activism.

Well, this is certainly not going to happen. The fact that Al Gore's advice will be heeded—well—anywhere is also comical. No one cares about global climate change, unless you live in Los Angeles, New York, or San Francisco, but Al Gore has a lot of time and money on his hands ever since he sold his Current TV network to Qatar-based Al Jazeera Media Network.

Reporters Are Allowing Biden's Crew to Edit Their Quotes