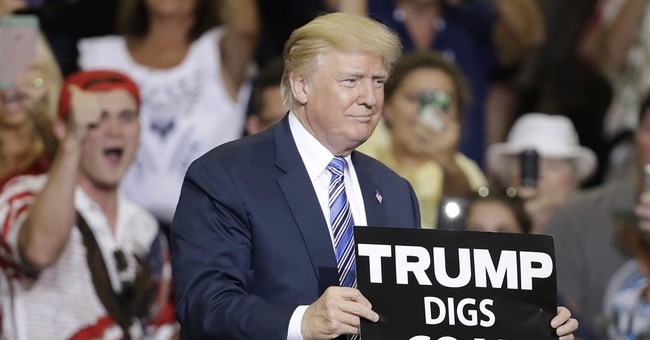 Cortney wrote about this earlier today, but we have to note the good news again. The July jobs report was solid—tremendous actually—with 209,000 jobs added. While not the indicator for strong economic growth, the Dow Jones has also been doing fantastic, heading for another record high closing today (via NYT):

“This is a Goldilocks report for the markets,” said Michael Gapen, chief United States economist at Barclays, meaning it was neither discouraging nor overheated. Citing the healthy payroll growth and steady gain in average hourly earnings in July, he added, “It really bodes well for macroeconomic growth.”

Indeed, stocks were higher in early trading after the release of the report, an indication Wall Street could post fresh records Friday. On Wednesday, the Dow Jones industrial average crossed the 22,000 mark for the first time.

Economists had been expecting a gain of 180,000 jobs, so the actual data is a sign that the economy is growing faster than other indicators had suggested.

Yet, one thing that needs to be mentioned is that we’re on track to add 25 million jobs under the Trump presidency. CNBC was skeptical of this promise, but in six months—one million new jobs have been added to the economy. Even CNN noted that we’re on track to hit this goal if we maintain adding jobs at a rate of 209,000 a month over the next ten years. It was 229,000 in June. In July, CNN’s John Berman said, “25 million jobs over the next ten years, Christine Romans, that’s what the president has promised; are we on track for that?”

The Republican National Committee is taking a victory lap, as they should—cutting a video of former President Obama’s skepticism of Donald Trump’s jobs and economic agenda, while juxtaposing how Trump is rebuilding the economy. Just another example of Obama not knowing what he was doing. Barry, he's just a better negotiator than you and he's certainly creating an environment that's better for business and investment.