ICYMI: The Heart Of Anti-Trump Resistance Is Mostly A Bunch Of White Progressives Who Can Take Off Work 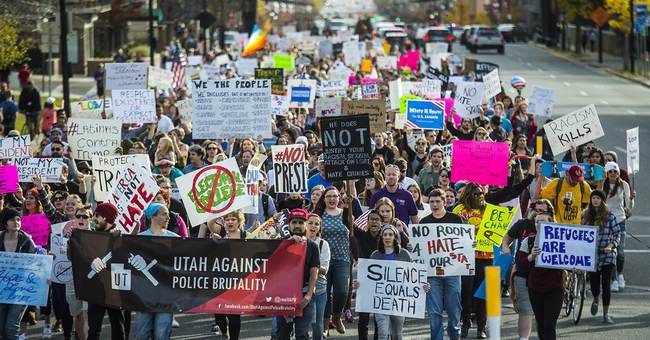 This is for all of those who are not in the MSNBC orbit. Of course, many of you probably already know this, but for a movement that stresses diversity and talks about bringing all people together to fight racist, misogynist, and xenophobic Donald Trump, it’s pretty much a band of white, wealthy, and overly educated progressives who are still stung that Hillary Clinton is not president, or at least that’s the case in the D.C. area, which accounts for one-third of those who have taken part in the protests against President Trump. The Washington Post noted the disparities in education, income, and race over these protests earlier this month. They also noted that for Black residents, they’re use to government falling short, and they they’re facing bigger obstacles in life than having their candidate lose an election:

One out of every three Washingtonians has marched in protest against President Trump or his policies at least once since January, making the District the capital of national dissent, a new Washington Post poll finds.

According to the Post poll, 53 percent of white residents participated in a march or demonstration in opposition to Trump’s policies since the start of the year, compared with 16 percent of African Americans and 36 percent of Hispanics and those of other racial and ethnic groups.

The overwhelmingly African American residents of Wards 7 and 8 are the city’s least likely to protest Trump, with only 12 percent saying they had. By contrast, 54 percent of residents in overwhelmingly white Wards 1 and 3 in Northwest Washington say they have protested the president.

High-income residents are among the most likely Trump protesters this year.

Mark Woodard, a black hospital technician who lives in Kingman Park in Northeast, said he has not felt compelled to protest because his life has not changed much under the new administration.

“I’m kind of waiting to see — he hasn’t made an impact yet,” Woodard said. “I’m able to go to my job; my benefits are fine. He’s not doing anything to affect me, so I’m not going to support any protests.”

Justina Jackson, 28, a black assistant pastry chef in Brookland who voted for Hillary Clinton, said that she is accustomed to being disappointed in government, no matter which party is in the White House, and that Trump is no different.

“I’m used to stuff not going my way,” she said. “There’s always some kind of obstacle I have to overcome just because I’m a young African American female. I don’t have a lot of sympathy for people who are upset about Trump."

Also, those in lower income brackets don’t have time to protest. The Post also found that among Black voters, even if those who disagreed with President Trump, were not motivated to protest against him. One of them, Raynard Styles, voted for Trump on the basis of change. He questions his vote now, but concerning demonstrating, it’s a no-go.

“He’s still my president, and I’m an American first,” he told the paper.

Five of the ten wealthiest counties are in the DC area, so I guess rabid liberals protesting Trump’s win is a given consequence. In the D.C. area, the so-called resistance is whiter, financially well off, and highly educated; it’s the archetypal urban professional. I’m not saying there’s anything wrong with that, but don’t go off marketing yourselves as some diverse coalition. The next time someone spouts how the GOP is so white; just remind them the heart of the D.C. resistance is just that—white people who can step away from work, whereas everyone else has more important stuff to worry about other than who won the 2016 election. In the meantime, this rabid cohort of liberal condescending busybodies will continue to bash Trump, protest him, and take comfort in telling his supporters that they’re racist, deplorable, misogynist, sexist, xenophobic, and homophobic (Trump is the most pro-LGBT Republican ever elected, by the way). If they want to keep losing elections, yeah—keep doing that.