Not Islamophobia: Man Charged In Murder Of Muslim Teen In Northern Virginia Was Here Illegally 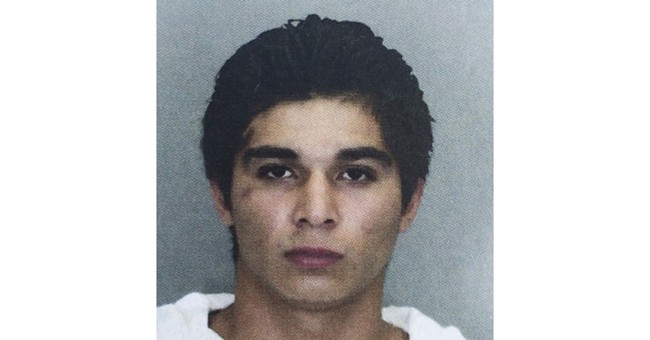 Let’s get a few things straight about the Nabra Hassanen murder in Northern Virginia. First, this is a disgusting crime. Second, although she was a practicing Muslim, this was not a hate crime, according to the Fairfax County Police Department. Hassanen, 17, was leaving a mosque in the Sterling with a group of 10-15 people heading to McDonald’s after Ramadan prayers. In the very early morning, the group got into an altercation with Darwin Martinez Torres while heading back to All Dulles Area Muslim Society. Torres then approached the group, driving up to them in his car, where he killed Hassanen with a baseball bat. Torres was arrested and was here illegally. So, it appears this isn’t a case of Islamophobia; it’s another murder committed by someone who shouldn’t have been here (via ABC News/AP):

Our hearts are heavy with grief. I stand with the ADAMS Community. Loudoun, please hold her family close to our hearts. Loudoun, she was us. pic.twitter.com/29cT6xnD7b

Though the slaying of Nabra Hassanen — whose body was found in a pond — raised concerns that she was targeted because she was Muslim, Fairfax County police spokeswoman Julie Parker said at a news conference that police have no reason to believe that the killing was a hate crime.

"Nothing indicates that this was motivated by race or by religion. It appears the suspect became so enraged over this traffic argument that it escalated into deadly violence," Parker said.

Hassanen, 17, was with a group of as many as 15 teens who had left their Sterling-area mosque between Ramadan prayers to get food at a McDonald's, Parker said.

They were making their way back to the All Dulles Area Muslim Society between 3 and 4 a.m. Sunday, some walking and some riding bikes, when the suspect drove up to the group and began to argue with a male teen, Parker said.

The suspect, 22-year-old Darwin Martinez Torres, drove up onto a curb and the group scattered, Parker said. Martinez Torres caught up with them in a nearby parking lot, got out of his car armed with a baseball bat and began chasing the group, she said.

"His anger over that earlier encounter then led to violence when he hit Nabra with a baseball bat," Parker said. She said he took the girl with him in his car to a nearby location, where she was assaulted a second time.

Authorities later found her body in a pond. An autopsy revealed she died of blunt force trauma to the upper body, Parker said.

NBC News reports that Immigration and Customs Enforcement has filed a detainer order against Torres.

UPDATE II: Daily Beast is reporting that Nabra Hassanen might have been raped.

Authorities suspect Nabra Hassanen may have been raped before she was murdered on Sunday, according to two sources with knowledge of the investigation.

The killing of Hassanen, a 17-year-old Muslim girl from the area, sent shockwaves through the country after a recent string of violent attacks on Muslims and racial minorities. Police say they are not investigating her death as a hate crime.

Hassanen’s body was found in a pond in Sterling, Virginia hours after Darwin Martinez Torres allegedly struck her with a baseball bat, took her away, and killed her. One source said police found a woman’s pair of underwear near Hassanen’s body, and investigators are awaiting test results from vaginal swabs.