Pennsylvania Man Arrested With Rifle At Trump Hotel In D.C. 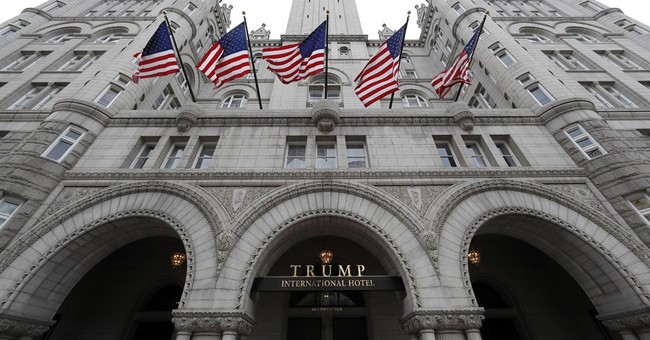 Earlier today, D.C. police arrested a physician from Pennsylvania after a tipster said he was traveling to the capital with weapons. The physician checked into Trump International hotel and was arrested 30 minutes later, where a handgun and a rifle were found in his trunk. He was reportedly acting suspicious and making threatening remarks. Whether they were aimed at President Trump remains unknown (via AP):

Man who made threatening remarks arrested at Trump International Hotel in DC after cops find rifle, handgun in car. https://t.co/KBtk0xySp9

Bryan Moles of Edinboro, Pennsylvania, was taken into custody at the downtown hotel, where he was staying as a guest, police said. At a news conference, Metropolitan Police Department Chief Peter Newsham said his department, as well as the Secret Service, received information from the Pennsylvania State Police at about 12:30 a.m. that a tipster had reported that Moles was traveling to the Trump Hotel in Washington, armed with weapons and ammunition.

Moles, 43, checked into the hotel about 30 minutes later, Newsham said. Authorities worked with hotel security to locate Moles’ car, and later, Moles himself inside the hotel.

“I was very concerned about this circumstance,” Newsham said, “and I believe the officers and our federal partners, and in particular the tipster, averted a potential disaster here in our nation’s capital.”

A police report said authorities saw a firearm in Moles’ vehicle and found another inside the glove compartment. Police seized a Glock 23 pistol, a Bushmaster assault-style rifle and 90 rounds of ammunition.

Newsham declined to comment on what may have motivated Moles.

BREAKING: Biden Forced to Withdraw Another Stalled Radical Nominee
Townhall
'Sir, do you even remember what my question was?' Prosecution just needs to sit back and let Jussie Smollett continue to bury himself
Twitchy
Latest Poll Numbers Spell Doom for Democrats — and Bust Some Narratives Along the Way
Redstate
The Beatles’ ‘Get Back’: The Long and Grinding Road
PJ Media