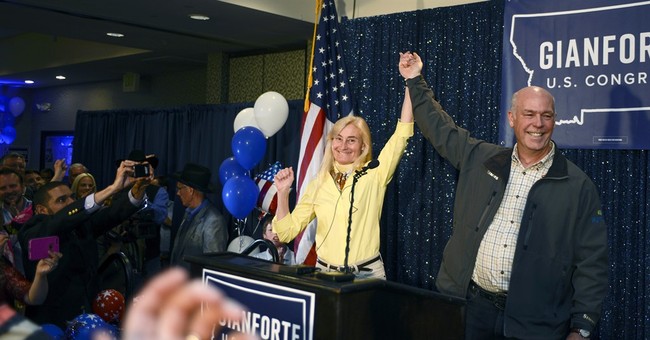 Montana Republican Greg Gianforte may have won Secretary of the Interior Ryan Zinke’s former House seat, but it wasn’t without controversy. Mr. Gianforte is facing misdemeanor assault charges for body slamming The Guardian’s Ben Jacobs, who was asking the candidate about the CBO score of the GOP health care bill, on the eve of the special election. Mr. Gianfote handily beat his Democratic opponent, Rob Quist, and he apologized to Jacobs in his victory speech. A Fox News team that was present at the time of the incident corroborated the account. It occurred at a meet and greet event in Bozeman.

Now, The Washington Post feels that should Mr. Gianforte be found guilty of the charges, he need to resign. If he doesn’t, then the House should expel him:

If Mr. Gianforte is convicted of his pending assault charge, he should resign. If he declines to step away, the House of Representatives should expel him. Otherwise, a man convicted of assaulting a reporter and who subsequently lied about the incident, will serve in a body whose very existence proclaims that even the most contentious disputes can be managed through debate and peaceful disagreement. At the least, Mr. Gianforte should be persona non grata on Capitol Hill, frozen out of committee assignments, treated with disdain.

Admittedly, expulsion would be unusual. Though the Constitution allows two-thirds of the House to expel any member for practically any reason, only five have been expelled: three for disloyalty during the Civil War period, and two for corrupt activities while in office. Mr. Gianforte can claim a measure of democratic legitimacy because the beating happened (barely) before the election.

It’s true that most Montana voters sent in their ballots early. But even if voters had chosen him with full knowledge of his behavior, lawmakers would have an obligation to make clear that speech is not to be met with violence, that the worst attack a questioner ever deserves is a tongue-lashing, that those chosen to conduct the nation’s business must meet at least a minimum standard of decorum.

Okay—that’s a fair line, but it needs to be applied to everyone. Paul Mirengoff of PowerLine dug up this incident, where Al Franken, admitted to body-slamming a protester heckling then-Vermont Gov. Howard Dean (via NY Post):

Wise-cracking funnyman Al Franken yesterday body-slammed a demonstrator to the ground after the man tried to shout down Gov. Howard Dean.

The tussle left Franken’s trademark thick-rim glasses broken, but he said he was not injured.

Franken – who seemed in a state of shock and out of breath after the incident – was helped back to his feet by several people who watched the tussle. Police arrived soon after.

“I got down low and took his legs out,” said Franken afterwards.

I understand Franken’s outrage, just as I understand a stressed-out Gianforte losing it when a snotty reporter persisted in asking hostile questions after being told the candidate would answer later. In neither case was violence the appropriate response. Both Franken and Gianforte lost control and should be condemned for it.

The Franken incident occurred in 2004, before Minnesotans grievously erred by sending the one-time funnyman to the Senate. Gianforte’s misconduct also predates his election.

I don’t think Jacobs was hostile and Mr. Gianforte should be condemned for this action. Yet, this is more of a case of liberal bias. Mr. Gianforte is being asked to resign or be expelled over an incident that predated his election win. Why shouldn't the same standard apply to Democrats, like Franken, who use an old wrestling move to take out someone for shouting at Gov. Dean? Where was that inquisition? Moreover, both persons that were body-slammed were exercising their constitutional rights. Now, the Dean heckler might have been asked to leave for his antics; did he Stuart Smalley have to body slam him to get him to quit whatever he was doing? Both instances are inexcusable, though in this instance, it will be the Republicans who will have to deal with the accountability nonsense from the media, not Democrats.

Should Mr. Gianforte be expelled? I doubt it’ll get the two-thirds needed to support this measure.