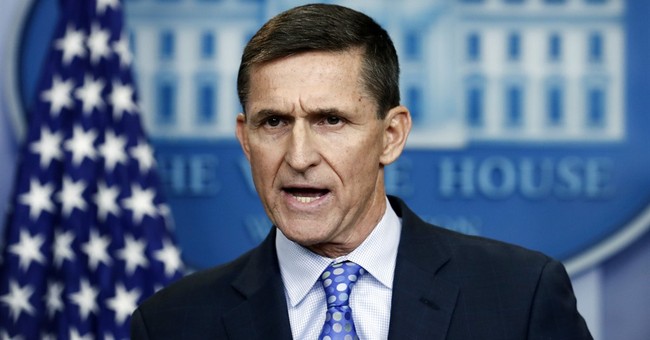 Former National Security Adviser Michael Flynn was a bad hire for the Trump administration. That’s not really in question. The man didn’t disclose funds he received from three Russian companies, lobbied on behalf of Turkey during the 2016 campaign, didn’t sign the White House ethics pledge, and told the transition team that he was already under federal investigation prior to the inauguration. He should have never been picked, but does that mean he’s guilty of treason regarding the Russia-Trump allegations? No. And that’s something that Bloomberg’s Eli Lake would like to remind everyone before we head to the races. Mr. Flynn has not been charged with any crime. Lake also said that the national security apparatus is assisting in fanning the rumor flames against Flynn as well:

Flynn has yet to be charged with a crime. If there is evidence that he betrayed his country, it has yet to be presented. None of the many news stories about Flynn's contacts with Russians and Turks has accused him of being disloyal to his country. And yet a decorated general has already been tried and convicted in the press.

None of this would be happening without some very dirty business from the national security state. It's a two-pronged campaign. First there are the whispers. Anonymous officials describe in detail elements of an ongoing investigation: intercepts of conversations between Russian officials about how they could influence Flynn during the transition; monitored phone calls about how Flynn had lied about his conversations with the Russian ambassador to his colleagues; how Flynn failed to disclose his payment from the Russian propaganda network on his official forms. This prong of the campaign is at least factual, but the facts don't speak for themselves.

The second and more insidious element here is the innuendo. [Former AG Sally] Yates never says Flynn was a spy for Russia. But her public remarks to Congress and the media appear designed to leave that impression. As she told [Ryan] Lizza [of The New Yorker] , Flynn was "compromised by the Russians." This sounds far more sinister than Flynn's explanation when he left his post in February. Back then he said he had forgotten elements of his discussion with the Russian ambassador that covered a wide range of issues.

Yates's innuendo is nothing compared to that dropped by former CIA director John Brennan. This week he treated the House Intelligence Committee to a feast of ominous suggestions. "Frequently, people who go along a treasonous path do not know they are on a treasonous path until it is too late,” he warned. Contacts between the Trump campaign and Russian individuals "raised questions in my mind about whether Russia was able to gain the cooperation of those individuals." This cooperation could be "witting" or "unwitting," he cautioned.

Now, Lake also says that it’s possible Flynn could be charged, along with other Trump officials that could be devastating to the Trump White House, but until then—let’s put the pitchforks away. He also noted that we only found out about the treasonous crimes of FBI Agent Robert Hanssen and CIA agent Aldrich Ames once they’ve been charged after lengthy investigations. Both Hanssen and Ames’ activities led to the deaths of American intelligence assets. Lake added that we’re not at witch-hunt levels yet, but let’s just preempt, given the state of the liberal news media.

And as for the allegation that Mr. Flynn might have been compromised, former Secretary of Defense has his doubts, which he explained on CBS’s Face The Nation this month:

JOHN DICKERSON, HOST: Let me ask you about former National Security Adviser Michael Flynn. You used to be head of the CIA. If you got information that the national security adviser had not told the truth about a contact with a Russian ambassador, how serious of an issue would that be if it were - if it were brought to you?

ROBERT GATES: Well, I would certainly make sure that the president knew that - that we had learned this. If we got that information in an intelligence report, then - then - then I would probably have sought a private meeting with the president to share that with him.

DICKERSON: The concern was that the Russians would be able to blackmail the former national security advisor because what they - they knew he had said something untrue and then caused the vice president to say something untrue. Is that a plausible possible outcome and something to be worried about?

GATES: I - you know, in all honesty, I think it's kind of a stretch. You know, it's one thing if somebody working for the U.S. government has sold secrets to the other side. It's another if they have something in their personal life that they're hiding for which they could be blackmailed. Having evidence that they didn't tell the truth to somebody in the same building where they work, maybe it's just the old intel guy, is - is, it's a problem. And it's a problem, like I just said, that I would tell the president about. But it's not the same as - and - and it's hard for me. I don't know General Flynn well, but it's hard for me to believe anybody would allow themselves to be blackmailed by the Russians because they didn't tell the full story or didn't tell the truth to the vice president of the United States who works 50 feet down the hall. You know, maybe he could have been blackmailed. It's theoretically possible. I - I just think it's a different - it's a different kind of situation than we would have thought of in the intelligence business.

Chris Cuomo's Book Canceled by Publisher
Townhall
'Sir, do you even remember what my question was?' Prosecution just needs to sit back and let Jussie Smollett continue to bury himself
Twitchy
Latest Poll Numbers Spell Doom for Democrats — and Bust Some Narratives Along the Way
Redstate
The Beatles’ ‘Get Back’: The Long and Grinding Road
PJ Media