NYT: Flynn Told Trump Transition Team That He Was Under Federal Investigation Prior To Inauguration 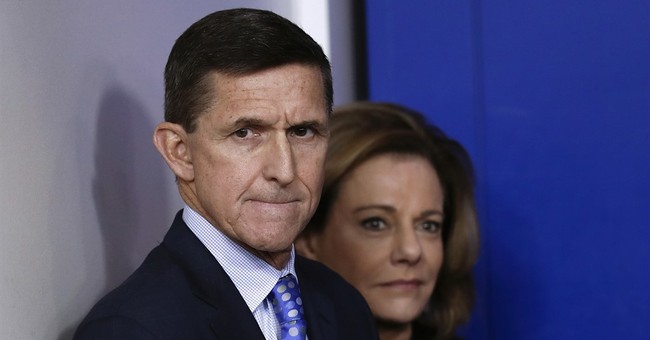 Michael Flynn has been a disaster for the Trump administration. Love him or hate him he’s been nothing but bad news for the White House. He keeps rehashing the Russia-Trump collusion allegations, an investigation that has yet to produce a solid shred of evidence to suggest as much. Then, he’s dismissed for not being truthful to Vice President Pence about conversations he had with Russian Ambassador Sergey Kislyak. Pence then repeated the claim that nothing substantive was discussed between the two men when in actuality Flynn and Kislyak discussed American sanctions on Russia. That alone could see you being shown the exit. And for Flynn—that’s what occurred. It was totally his fault that he wasn’t forthcoming with the vice president. He deserved to go, though don’t take it that it was because of the conversation itself. None of the meetings Trump associates have had with Russian officials could be described as improper, though Democrats seem to think so—which is nonsense.

Then, we hear about how Flynn didn’t sign the White House ethics form, how he failed to disclose the income he received from three Russian companies for speaking engagements on his disclosure form, and how he lobbied on behalf of Turkey during the 2016 election. We also found out that prior to the inauguration, the Trump transition team knew that he might register as a foreign agent, despite being tapped to be national security adviser. Now, The New York Times is reporting that Flynn told the transition team that he was also under federal investigation prior to the inauguration:

Michael T. Flynn told President Trump’s transition team weeks before the inauguration that he was under federal investigation for secretly working as a paid lobbyist for Turkey during the campaign, according to two people familiar with the case.

Despite this warning, which came about a month after the Justice Department notified Mr. Flynn of the inquiry, Mr. Trump made Mr. Flynn his national security adviser. The job gave Mr. Flynn access to the president and nearly every secret held by American intelligence agencies.

Mr. Flynn’s disclosure, on Jan. 4, was first made to the transition team’s chief lawyer, Donald F. McGahn II, who is now the White House counsel. That conversation, and another one two days later between Mr. Flynn’s lawyer and transition lawyers, shows that the Trump team knew about the investigation of Mr. Flynn far earlier than has been previously reported.

Mr. Flynn, a retired general, is one of a handful of Trump associates under scrutiny in intertwined federal investigations into their financial links to foreign governments and whether any of them helped Russia interfere in the presidential election.

Mr. Flynn has been the subject of more scrutiny as of late due to reports that President Trump tried to shut down the FBI’s investigation into his Russian ties, and whether any collusion between the two sides occurred. Former FBI Director James Comey, who was fired by Trump, reportedly drafted a memo detailing ways in which the president was acting improperly to influence the ongoing federal investigation into Mr. Flynn. So, on top of the Russia hysteria that Democrats have been going nuts over—there’s the impeachment train rolling into the station to calls of obstruction of justice, an allegation that is also unsubstantiated.