Vox: Democrats Are Falling For Fake News About The Russia-Trump Collusion Allegations¬ 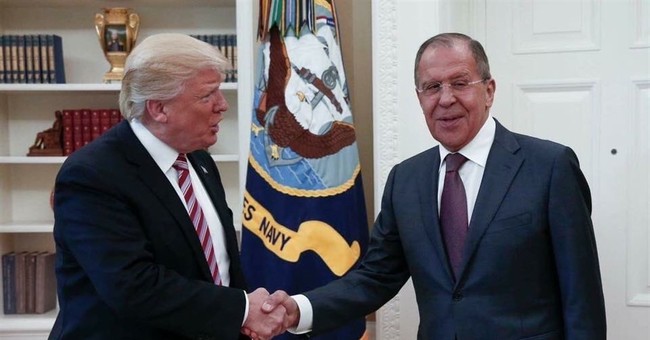 If there’s one phrase that liberals, and some conservatives, are tired of hearing its “fake news.” The phrase is often used to mock or delegitimize stories that one doesn’t like. For some Trump supporters, it’s any story that paints the 45th president in an unflattering light. Granted, there have been a string of fake news stories from the news media, like Treasury Secretary Steve Mnuchin being involved in tossing an old lady out of her house over a mere 27¢, the removal of the MLK Jr. bust from the Oval Office, the mobilization of 100,000 guardsmen to round up illegal aliens, and renaming black history month. The Federalist had a good post about this after the inauguration. Yet, liberals seem to be indulging in fake news, which is driven by hyper partisanship, the loss of Democratic power on the Hill, and the ongoing investigation into whether the Trump campaign colluded with the Russians during the 2016 election.

Vox, of all places, had a lengthy but thorough history of the liberal descent into crazy town about the Russia-Trump probe and the theories it has generated. It’s not just the collusion. Zack Beauchamp noted that some of these folks believe that Senate Majority Leader Mitch McConnell and Speaker of the House Paul Ryan funneled money from the Russians into Trump’s campaign. Also, Carter Page, a former foreign policy adviser to the Trump campaign, was ordered to ask the Russians for assistance in hacking the election. Another “scoop” was that Trump, Pence, and Ryan would be indicted on racketeering charges. It’s total nutbar factor six material. It’s insane. Yet, Beauchamp noted how Sen. Ed Markey (D-MA), along with interim DNC chair Donna Brazile, has cited these unhinged theories. Markey, Beauchamp writes, was forced to apologize about spreading a nutty claim that some New York grand jury had been empaneled to investigate the Trump-Russia link. Yet, a sitting senator and a well-known Democratic operative tweeting and citing these reports give these crackpot theories a scintilla of credibility, which is why they’re shared and re-shared.

Beauchamp does suggest that there are “legitimate reasons” to believe that the Trump camp worked with Russian hackers to sink Hillary Clinton. Even if those reasons turn out to be false, there’s at least enough to warrant an inquiry. Yet, he also notes that saying the Russia-Trump link deserves investigating is different from what these “Russiasphere” writers think, and he compares their flawed theories to be as credible as those who peddle Holocaust denial.

“The Russiasphere doesn’t have one unifying, worked-out theory — like “9/11 was an inside job” or ‘Nazi gas chambers are a hoax.’” he wrote. “Instead, it’s more like an attitude — a general sense that Russian influence in the United States is pervasive and undercovered by the mainstream media. Everything that happens in US politics is understood through this lens — especially actions taken by the Trump administration, which is seen as Kremlin-occupied territory.” Beauchamp names Louise Mensch, a former UK conservative member of parliament, John Schindler, a former NSA employee, and Claude Taylor, a DC-based photographer, and the Russiasphere’s point of the lance:

Take Mensch, who is probably the Russiasphere’s most prominent voice. She actually did have one legitimate scoop, reporting in November that the FBI had been granted a warrant to watch email traffic between the Trump Organization and two Russian banks (before anyone else had). Since then, though, her ideas have taken a bit of a turn. In January, she launched a blog — Patribotics — that’s exclusively dedicated to the Trump/Russia scandal. It’s ... a lot.

“Sources with links to the intelligence community say it is believed that Carter Page went to Moscow in early July carrying with him a pre-recorded tape of Donald Trump offering to change American policy if he were to be elected, to make it more favorable to Putin,” Mensch claimed in an April post. “In exchange, Page was authorized directly by Trump to request the help of the Russian government in hacking the election.”

Another post, allegedly based on “sources with links to the intelligence community,” claimed that Trump, Mike Pence, and Paul Ryan were all going to be arrested on racketeering charges against “the Republican party” owing to collaboration with Russia.

“Senator Orrin Hatch of Utah, who was the ‘Designated Survivor’ at the inauguration of Donald Trump (yes, really) is likely to become President,” Mensch writes.

The most worrying sign, according to the scholars I spoke to, is that some mainstream figures and publications are starting to validate Russiasphere claims [Vox names Brazile, Keith Olbermann, constitutional lawyer Laurence Tribe, and some DNC communications staffers as examples]

This is the key danger: that this sort of thing becomes routine, repeated over and over again in left-leaning media outlets, to the point where accepting the Russiasphere’s fact-free claims becomes a core and important part of what Democrats believe.

There are already Democrats peddling “fact-free” nonsense regarding this investigation. Rep. Maxine Waters (D-CA) is fighting to impeach Trump every day, accuses Rep. Jason Chaffetz (R-UT) of having ties to the Russians (no evidence for that), and thinks that the campaign strategies of the Trump campaign were from Putin’s playbook, with chants and slogans developed within the walls of the Kremlin.

The House and Senate Intelligence Committees have yet to produce a shred of solid evidence to point to Russian collusion. Sen. Dianne Feinstein (D-CA), a member of the intelligence committee, has said twice this month that no evidence has been found. In fact, Senate Democrats on the committee have started to resign themselves to the fact that no evidence might be found.

It’s still part of the Democratic shock from the 2016 election. If the Left had truly looked inward, saw that Clinton was a horrible candidate, and note that her campaign did not have an economic message—things might be different. The crazy might have been not as vocal. Clinton did not reach out to rural white working class voters. She called supporters of Trump deplorable. She was not strong on trade. She had no picture to paint, no narrative. Despite his bluster, Trump talked about better trade deals, which working class communities see as one of the reasons responsible for their economic downturn. He talked about bringing back jobs and creating them through a renewed emphasis on manufacturing and infrastructure. And Trump was going to knock the hell out of ISIS. It’s a perfect Rust Belt cocktail: strength abroad, job creation, and better trade deals to protect American workers. Clinton did none of this. Instead, she blames former FBI Director James Comey and the Russians for being one of the worst candidates to ever be nominated by a major party for her loss.

To the die-hard Clintonite, Trump had to have cheated to beat the angelic, qualified, and female Clinton. In the end, that wasn’t enough to win. And it wasn’t because the Russians hacked our election. Also, they didn’t hack it. That’s another lie that’s being disseminated by the news media. Russia didn’t mess with the vote tallies.

Former FBI Director Robert Mueller is the special counsel for the DOJ’s Russia collusion probe. He’s quarterbacking the whole show and it could take years. As a result, the crazy neo-red scare antics will continue to leech off of desperate and embittered liberal voters. Also, Mensch's latest "scoop" is that the Supreme Court has notified President Trump that the House Judiciary Committee plans to impeach him, and that a sealed indictment exists, or something. That's not what our Supreme Court does by the way.

"In fact, Mike Flynn had not already been indicted." https://t.co/QmMDM3jxIe

Louise Mensch is what you get when a British person writes West Wing fan fic.

Mensch can gobble about the headline all she pleases. The fact is the body of the story reveals she doesn't have a clue what SCOTUS does. https://t.co/Rf2pfOHmid