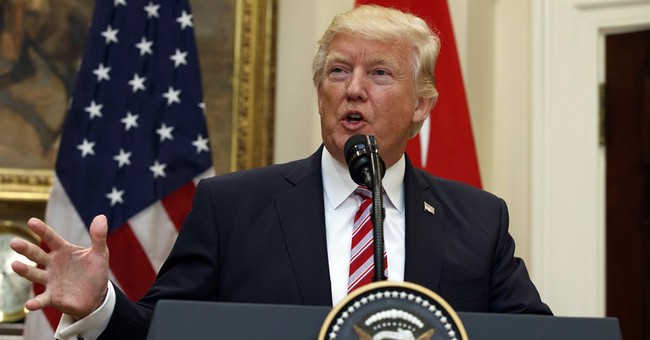 So, this appears to be a news cycle that never ends. On Friday, The New York Times reported that President Donald Trump told the Russians that firing James Comey from the FBI relieved him of some pressure from the bureau’s investigation into possible collusion. Mr. Comey revealed in March that there was an active investigation looking into collusion between members of the Trump campaign and the Russians during the election. The president also reportedly called Mr. Comey a “nut job.” Yet, an official cited by the news publication defended Trump’s remarks regarding the easing of pressure with Mr. Comey's firing, saying it was done to "coax concessions" out of Russian Foreign Minister Sergey V. Lavrov on Syria and the issues. Still, the notion that firing Mr. Comey was done to impede the investigation will be rehashed (via NYT) [emphasis mine]:

President Trump told Russian officials in the Oval Office this month that firing the F.B.I. director, James B. Comey, had relieved “great pressure” on him, according to a document summarizing the meeting.

“I just fired the head of the F.B.I. He was crazy, a real nut job,” Mr. Trump said, according to the document, which was read to The New York Times by an American official. “I faced great pressure because of Russia. That’s taken off.”

The conversation, during a May 10 meeting — the day after he fired Mr. Comey — reinforces the notion that Mr. Trump dismissed him primarily because of the bureau’s investigation into possible collusion between his campaign and Russian operatives. Mr. Trump said as much in one televised interview, but the White House has offered changing justifications for the firing.

The White House document that contained Mr. Trump’s comments was based on notes taken from inside the Oval Office and has been circulated as the official account of the meeting. One official read quotations to The Times, and a second official confirmed the broad outlines of the discussion.

A third government official briefed on the meeting defended the president, saying Mr. Trump was using a negotiating tactic when he told Mr. Lavrov about the “pressure” he was under. The idea, the official suggested, was to create a sense of obligation with Russian officials and to coax concessions out of Mr. Lavrov — on Syria, Ukraine and other issues — by saying that Russian meddling in last year’s election had created enormous political problems for Mr. Trump.The president has been adamant that the meddling did not alter the outcome of the race, but it has become a political cudgel for his opponents.

Now, Press Secretary Sean Spicer did not deny the trashing of Mr. Comey by the president or the story in general. It's disconcerting, especially the latter portion--that Trump terminated Mr. Comey due to the pressure of the investigation--but let’s again circle back (again) to why Democrats think there may be blood in the water: impeding the Russian probe and obstruction of justice.

This won’t impede the investigation. The FBI/DOJ said, even before the appointment of former FBI Director Robert Mueller as special counsel, that their efforts would not be hindered. The House and the Senate Intelligence Committees have their own investigations. There is no stopping the inquiry into possible Russian collusion, which has so far yielded zero evidence to corroborate such an explosive claim that the Left finds comfort in to explain why Hillary Clinton lost the 2016 election.

The president has called this effort a witch-hunt, but added that he respects the special counsel appointment. He has also called the Russia-Trump link stories in the media fake. The Left, with Rep. Maxine Waters (D-CA), is doing a good job chipping away at the credibility of the charge. Waters went on MSNBC’s Morning Joe, where she went on a unsubstantiated screed about how the strategies employed by the Trump campaign during the election were from Putin’s playbook, and that all the dots need to be connected, and all the facts need to be analyzed, but in the end—all roads lead to Trump. Again, this was all said without evidence. It was unhinged, but what else can you expect from a California liberal. Waters has been in the limelight more often, as she’s also one of the most vocal members of Congress calling for Trump’s impeachment. Obviously, she just wants to get rid of the president, which is a feeling that would find sympathy among the Clinton camp.

At the same time, we have another instance of the president being loose with his words that might cause him more unnecessary heartburn with the media.